This is not the Luke Hochevar you remember, and he could help the Red Sox in 2013 and beyond.

The Red Sox have need of relief help, thanks to injuries to Andrew Bailey, Joel Hanrahan, and Andrew Miller. They haven't run out of relievers by any means, and still have additional options in Triple-A Pawtucket, but the number of bullpen pieces on hand in the majors who you know can record consistent outs against big-league hitters has dwindled considerably. With that in mind, the Sox have an eye on the relief market as the non-waiver trade deadline approaches.

One reliever they're reportedly checking out, according to FOX Sports' Ken Rosenthal, is Royals' right-hander Luke Hochevar. Now, Hochevar was a poor starter, and for five years, but he converted to relief this season after the Royals acquired James Shields, Wade Davis, and Ervin Santana for their rotation. Th result? An ERA of 2.00, 9.5 strikeouts per nine, and an FIP that says while he's not quite that good, he's still a valuable, albeit expensive for the Royals, relief piece.

That last bit about expense is what will make Hochevar available. He's a super-two player in his third year of arbitration making $4.56 million, and he's making it as a non-closer on a team with a limited budget. He'll pull in even more in 2014 despite moving from a starting role, but he'll still just be a reliever on a club that has other things they need to be spending the funds they have on, in addition to all of the right-handed relief depth they're already sitting on. The Red Sox could swoop in, pay for the rest of 2013 and assume responsibility for his 2014 contract, and likely give up less in the process than they might normally for someone with team control since relieving the Royals money owed Hochevar is doing them a favor on its own.

Should they, though? Hochevar's past failures, combined with just 36 innings in relief, do make you wonder if Boston would regret having him around. There are legitimate reasons to think he's improved in his new role, though, and the Sox should take advantage of his availability because of it.

Hochevar's fastball as a starter sat around 92-93 miles per hour. As a reliever, however, he's averaging over 95 mph, and it's helped push the pitch from one of his most significant issues to a net positive in his repertoire, according to PITCHf/x run values. It's not a dominating offering, but it's a usable one, and it's helped set up his secondary pitches better than it did as a starter. Speaking of those secondary offerings, they have changed, as Hochevar has dropped his slider almost entirely in favor of a cutter. He's had the cutter before, but has bumped its usage from about 10 percent to one-third of the time, and like his fastball, has seen the velocity jump a couple of ticks.

That has been his primary pitch in terms of success, according to the same PITCHf/x run values cited above. He's seeing a higher rate of swings-and-misses on his stuff, is seeing less contact on pitches out of the zone despite a higher percentage of swings there, and has had more success with first pitch strikes than he's ever had, and it's not even close. Hochevar finally seems to be getting his sequencing and pitch selection right, and it's paid off in his new role.

His cutter usage has only increased as the year has gone on, too, according to Brooks Baseball. While Hochevar threw the pitch just 20 percent of the time in April, that's jumped, by month, to 32, 37, and now 41 percent. This has come at the expense of his sinker more than anything, but that's fine: his sinker has never been a very useful pitch for him, and less of it is more.

Besides his curve, the cutter has been his most-effective and consistent swing-and-miss offering. As he's increased his cutter usage, however, his four-seam fastball has also started to pick up additional swing-and-misses, likely due to the aforementioned pitch sequencing and first-pitch strikes that allow him to control a plate appearance. In the past, the idea of Hochevar controlling anything was hard to fathom, but here we are. 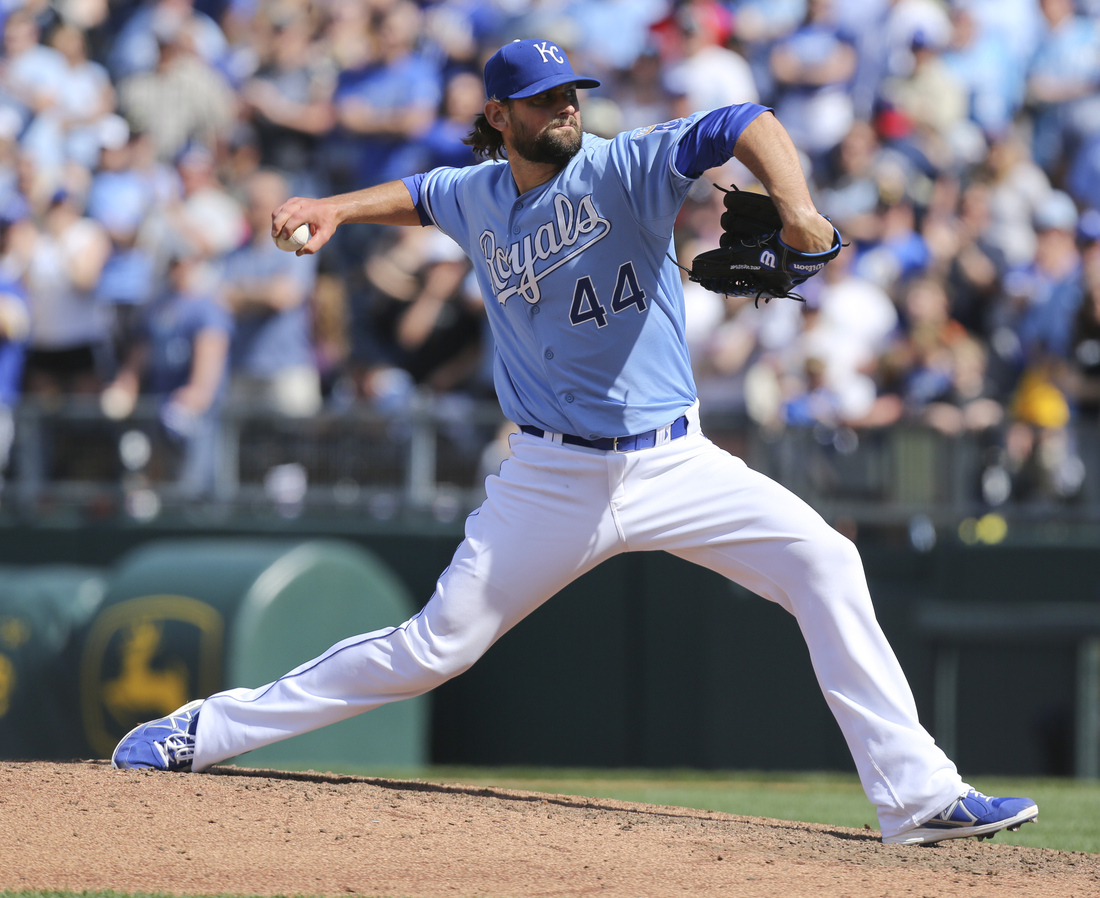 Not everything is perfect, of course. As said, his FIP is a bit higher, although not too high, relative to his ERA. This is in part because he's stranded 91 percent of his baserunners and owns a .212 batting average on balls in play. While there's luck at play for sure, there are also a few points worth mentioning. In the past. Hochevar was awful from the stretch, but he seems to have turned that around with a 347 OPS with men on base that's 103 percent better than the league average. That could regress a bit as his BABIP does, sure, but it's got plenty of room to fall back before it becomes problematic for the right-hander.

Relievers in general have lower BABIP, so you don't necessarily have to assume he'll fall all the way back to where you'd expect a starter's BABIP to be. It won't be .212 all year, but it should be lower than his career rate of .299 when all is said and done. That's how you probably end up with an ERA that better matches his FIP, and as said, that's a fine reliever to have around in addition to what the Sox already have on board, especially if the price is minimal. 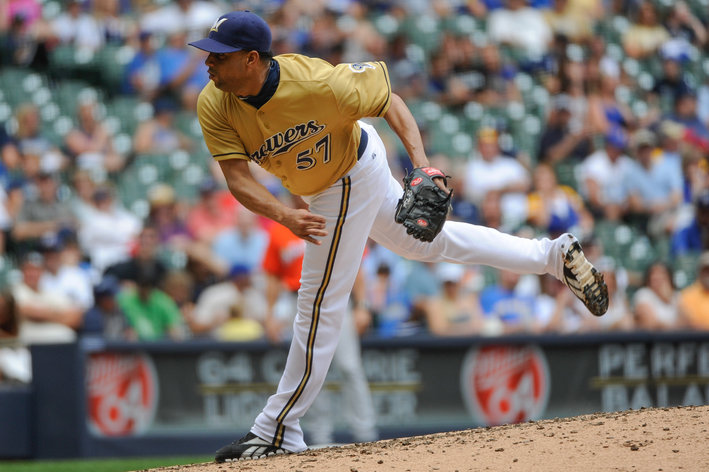 Boston wanted the reliever, but the Orioles were willing to pay the price for him.

It very well might be, too. The Royals aren't exactly known for making fantastic trades that benefit the organization, and the Red Sox have plenty of pieces that they could move to Kansas City without adversely affecting future Sox teams. This is the perfect landing spot for Michael Almanzar, given that Mike Moustakas has once again been horrific at third base for the Royals -- Almanzar isn't big-league ready, but he's two years younger than Moose and should be in Triple-A next season, giving the Royals one last shot with the player they thought was the future at the hot corner. Bryce Brentz might sound expensive for Hochevar -- and very well could be -- but he has nowhere to play in Boston right now or maybe even next year, needs a 40-man spot in 2013, and isn't necessarily tearing up Triple-A as a 24-year-old. Kansas City could use some help in the outfield -- they did use Jeff Francouer for half the season -- so Brentz might be the kind of return that would get them to give up Hochevar in a heartbeart. If the Royals would prefer pitching, Boston has some fringe 40 options for their organization that the Royals might be intrigued by in Keith Couch and Chris Hernandez. They're both likely relievers in the majors, but securing six years of team control of a reliever in exchange for one-and-a-half of an established one, even if Hochevar is ultimately the better talent, could interest them.

Will one of those be enough? Remember, Hochevar isn't a closer, so he doesn't have that closer markup on his price tag, and the Royals are likely more concerned with shedding his current and future payroll in order to free them up to make other moves to improve than they are in necessarily bringing back some kind of impact talent. A suitable B prospect that they're into might do the trick, and give the Sox a reliever who can help both now and next year as they wait for their minor-league arms to sort themselves out.