Despite drop in velocity, Felix Doubront turning into top arm for Red Sox

Even after losing 2-3 MPH on all his pitches, Doubront is turning into a more polished pitcher.

Share All sharing options for: Despite drop in velocity, Felix Doubront turning into top arm for Red Sox

Coming into just his second full major league season, Red Sox starter Felix Doubront didn't get off to the best of starts. The 25-year-old showed up to spring training overweight, many accounts saying by around 15 pounds. After a disastrous 2012 season, many Sox pushed themselves even harder in the off-season, and coming into spring training overweight didn't exactly set Doubront off on the right foot.

As the season began it became clear something wasn't the same about Doubront as in the past -- his velocity. All of last season his fastball was consistently around 93-94 MPH, but over his first few starts of the season it was sitting 90-91 MPH, leading to speculation about a possible injury, or further fitness issues. He and the Red Sox both denied there was anything wrong health-wise, however, claiming ignorance on the sudden loss in velocity.

Below is a chart and table (Brooks Baseball) which shows the decrease in velocity on all his his pitches since 2011, but even more so this season. 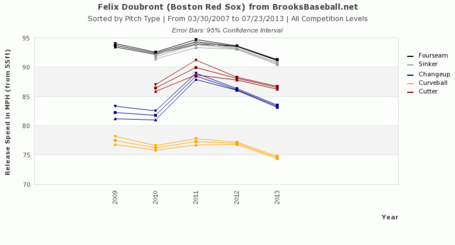 With the loss of velocity, Doubront has turned himself into a completely different pitcher, a guy who focuses more now on locating his pitches and pounding the strike zone to get hitters out that way. Although his strikeout totals are down (8.4 K's/9 innings), so are his walk totals (3.9 walks/9 innings), which suggest that he's compensated for his dip in power to be more of a finesse pitcher, rather than focusing on blowing hitters away. 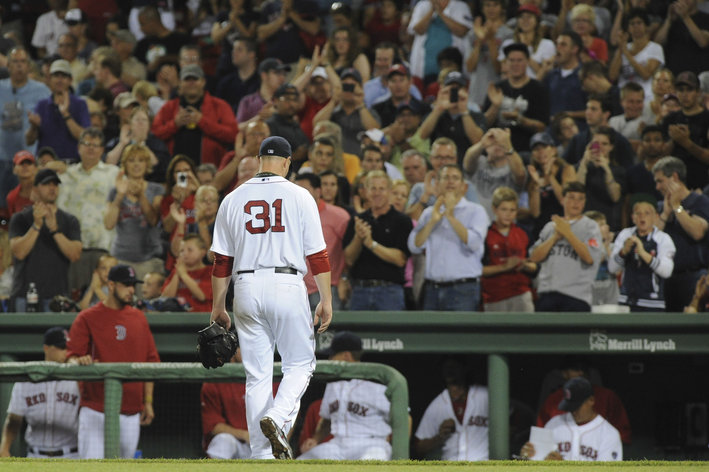 As Felix Doubront improves, Jon Lester has declined. But a good start on Tuesday could signal the return of Boston's other southpaw starter.

A new mindset on the mound has certainly paid dividends for Doubront and the Red Sox, as going into his 18th start of the year on Wednesday, he has put up some pretty remarkable numbers. He is 7-3 with a 3.76 ERA, but even more impressive, he has allowed three earned runs or fewer in 16 of his 17 starts this year, including 12 straight dating back to May 16. His recent streak is putting himself in the same category as some of the Red Sox greats. His 12 straight starts of allowing three earned runs or less is the longest streak for a Red Sox southpaw since Bill Lee in 1973, and he's the first player to have such a streak for the team since Pedro Martinez went 14 in a row in 2002.

Clearly, over the course of the off-season and the first couple months of the season, something has changed for Doubront and. When you look at the pure velocity numbers the first thing that comes to mind is injury, bringing with it the expectation of decline. Obviously the opposite has come to pass, and Doubront deserves a lot of credit for a 2013 so much improve from his 2012 season, where he went 11-10 with a 4.86 ERA. He's become more of a "pitcher" and has been able to use all of his pitches effectively, something he hasn't been able to do until this season.

With the numbers Doubront has posted thus far this season he is beginning to turn into a guy the Red Sox can count on every time he takes to the mound to put them in a position to win. As his approach is no longer about blowing hitters away, he's been much more successful, and with the way he is pitching now he's more likely to pitch longer in his career. Being only 25-years-old, Doubront has a chance to be a major part in the Red Sox rotation for years to come and dare you say a potential ace? Well, the numbers don't support that yet, but if this trend keeps up he is on his way to being the next big starting pitcher for the Red Sox. Felix Doubront's mysterious loss of velocity may turn out to be the best thing to happen to his career.