Boston could use another reliable bullpen arm, and he might be waiting in Milwaukee for them.

The Red Sox have lost relievers Andrew Bailey, Joel Hanrahan, and Andrew Miller to season-ending injuries, severely depleting the back-end of their bullpen. While they still have considerable depth thanks to a plethora of pitching prospects int he high minors, it's noticeably less strong than it was after losing two closers and a pitcher who was pitching with the quality expected of a setup man. That's why the Red Sox are shopping for relievers before the July 31 non-waiver trade deadline, with the Brewers' Francisco Rodriguez a current target according to CBS Sports' Danny Knobler. 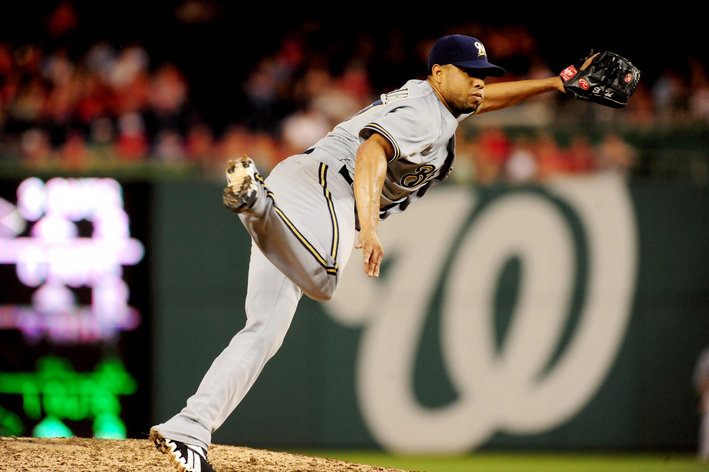 The trade talk in the rumor mill and between fans has shifted focus to the rotation of late, but the Red Sox still find themselves with a big need in the bullpen, and Milwaukee has just the answer.

Knobler reports that the Red Sox, along with the Dodgers and Tigers, are scouting K-Rod, who is once again living up to the nickname bestowed upon him over a decade ago. Apparently, none of the three teams have actually attempted to make a deal as of yet, but that might be in part because, as Knobler says, the Brewers might not deal Rodriguez until the July 31 deadline looms closer.

Rodriguez had a down 2012 that resulted in his signing a minor-league deal with the Brewers for 2013, one he had to wait until mid-April to ink. He currently sports a 1.09 ERA with 9.5 strikeouts per nine and just under three times as many punch outs as walks. He's thrown just 24 innings, and there's bound to be a little bit of regression at some point, but there's little debate about the fact that he would be an upgrade in the Boston bullpen, and return a bit of the Sox' depth to Triple-A Pawtucket where it can await the next call-up.

What Rodriguez will cost in a trade is something of a mystery, but given he's making all of about $2 million this year and we're already nearing July's end, the bulk of it is going to have to come from a prospect or prospects. This seems like the perfect situation for the Red Sox to deal one of their B-level prospects who is going to need 40-man roster protection in November to avoid the Rule 5 draft. Someone like Michael Almanzar or maybe even Bryce Brentz might seem like a lot for a rental relief piece, but Rodriguez is one of the best available relievers at the deadline, and doesn't come with a bloated contract or wilting peripherals. Adding him to the mix would undeniably strengthen Boston's bullpen attack in the seventh, eighth, and ninth, and help bolster the club against further reliever injury.