You'll be able to guess a few of them, but there some major surprises as well.

Keith Law released an updated top-25 prospects list earlier this season, and it helped introduce Garin Cecchini to the world of non-Red Sox fans. Now, though, he might have exposed everyone to another prospect on the rise in the Boston system, as he's gone 50 deep this time in his mid-season list.

Four Red Sox made the cut, with another just missing. While you can likely guess who the first three are -- once Cecchini broke out at High-A, it's been the same three again and again -- the fourth and the just-missed player might surprise you.

Big shocker here, right? The question, as it has been with every other mid-season update, isn't about whether Bogaerts would top Boston's list. It was where he would end up relative to everyone else. He's basically a consensus top-three prospect at this point, a huge get for a team that, until this year, wasn't anywhere near that kind of talent in the draft thanks to quality records. That's what you hope to fix with international signings, though, and while they don't all work out, sometimes you get Xander Bogaerts. 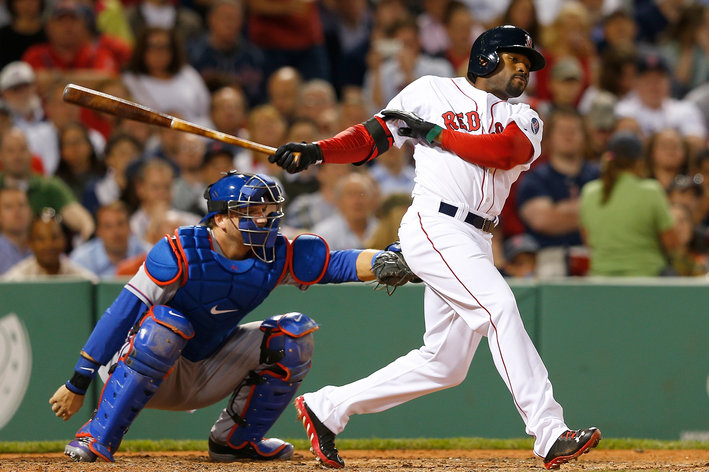 That's 10 percent of the whole, if you're into the whole math thing.

Cecchini as the second-best prospect in the system is surprising, but it's not hard to see how Law got to this conclusion. He obliterated the Carolina League by posting the only 1000-plus OPS in the entire league among qualifiers, and has taken to Double-A after a promotion as if he weren't facing more advanced pitching at all. Cecchini now has 22 games under his belt with the Sea Dogs, and has hit .341/.449/.500. He's tied his career-high for homers in a pro season after just 85 games, whereas last year he played 118. He won't ever be a huge power hitter in terms of homers -- or, at least, he doesn't profile that way at the moment -- but he has enough of everything else to justify this aggressive ranking.

The fact that Bradley moved up 16 spots in Law's order but was still jumped by Cecchini should tell you a lot about both of these prospects. While Law reminds that the March hype was silly, he also says what's important: Bradley is a plus-plus defensive center fielder in the making, and one who can perform at the plate.

Here's the surprise, as Owens hasn't even slipped onto everyone's updated top-50 lists. Law seems to like Owens quite a bit, though, citing that he's "probably" a #3 starter type, but has room to be even better than that if he can learn to throw strikes more efficiently. Sounds kind of like a current Boston lefty in Felix Doubront, in that regard, except Owens is 6-foot-6 and just made his last start as a 20-year-old on Wednesday. There's a lot to like here, even if he's "only" a #3 who looks better than he actually is.

Catcher Blake Swihart is the just-missed Sox prospect in question. Law lists eight players in this category, which you could take to mean says that the Red Sox have five top-60 prospects. It's a bit disconcerting to see none of the Matt Barnes, Allen Webster, or Anthony Ranaudo trio here, but at the same time, realize that the Sox have five top-60 guys by Law's reckoning before you even get to them, or to 2013 draft picks Trey Ball and Jonathan Denney, or consider that rookies like Drake Britton, Brandon Workman, and former top-100 prospect Jose Iglesias are already in the majors. If you hadn't noticed yet, the Sox system is pretty okay right now.