Maybe the Red Sox don't need Garza in the rotation, but there's a chance they could use him.

If Matt Garza wasn't the type of guy you'd expect to run into in line at Tao, that shit on the bottom of his face at your eye level, you'd probably be more likely to want the guy on your baseball team. You'd also be more likely to want him if it wasn't going to cost you your wallet, your spleen and your child.

Read More: The worst Red Sox column of the year is why we can't have nice things

With Clay Buchholz in and out of his bubble and Jon Lester in and out of trouble, the Red Sox' rotation is weaker than the team's record indicates, having been inflated by literal Workman-like performances from spot starters, the resurgence of John Lackey and the arrival of an AA-rated Felix Doubront. Ryan Dempster, meanwhile, looks like a guy whose job is to go out there and eat innings with the appetite of Bartolo Colon, minus the Buddha calm, though to be fair, that was always the plan and a missing ingredient from recent Sox history. At its strongest, the Red Sox rotation doesn't need to add Garza, but to paraphrase one of Donny Rumsfeld's B-sides, you go to WAR with the army you have.

Here's the potential problem: Without Cliff Lee on the market -- and it sounds like he's not -- Garza's a B+ pitcher commanding Lee's A+ price. When word leaked that the Rangers had talked about sending Jurickson Profar to Wrigley in a deal for Garza, he looked considerably less attractive in these parts. Garza's on a one-year deal, and mortgaging a potential future superstar for two months of bro-arm has the potential for Bagwellian blowback. Then again, we don't know the context in which Profar came up: Theo Epstein may have just told Jon Daniels, "You know what's an awesome name? Jurickson Profar."

He could say the same thing about Xander Bogaerts, if you get my drift.

The flip side of this is that at the non-Bogaertian price, Garza's a great piece. He hasn't had an ERA over 4 as a full-time starter, and that includes his congress of seasons in the AL East. As friend of the program Paul Swydan wrote late last month, Garza has been "fairly fantastic" recently, which could drive up his price. Given the information farts we've gotten about Buchholz's injury, it's still hard to know if the team knows more about Clay's hurting neck than it's letting on; to echo Rumsfeld once again, it's a known unknown. 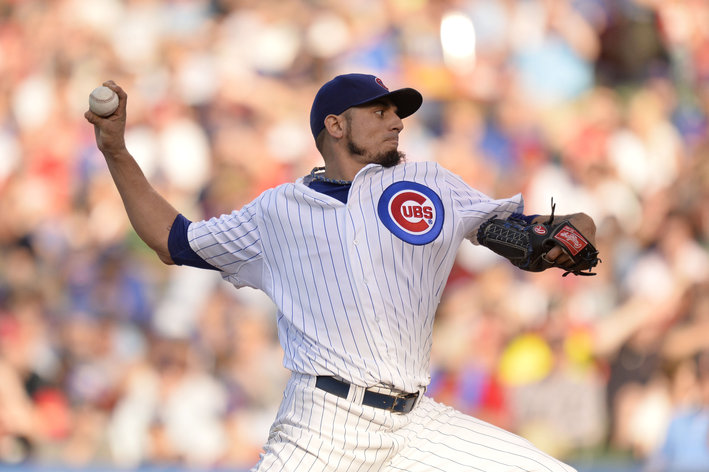 If Boston decides to go all-in on Garza, they've got more pieces than anyone else who hopes to get him.

For this reason, it might be okay to worry if the Sox trade for Garza, simply because it would tell you what the team thinks of Buchholz and Wildman Lester. There's some truth to the adage that you can't have enough pitching, but you also don't want to throw good money after bad. The ghost of Bagwell may not hang over every Sox deadline deal (not leastwise because he's very much still alive), but it's at least following the rumors on its ghost-phone. The new CBA means developing players and exploiting their low-salaried years is more important than ever, and trading for Garza would liquidate a bunch of those for only a few months of bro-punk heat.

On the other hand, prospects are prospects for a reason -- for any of the Sox' pitching prospects to turn into Garza, something will have gone very right. That could be the Sox' undoing in this scenario, though: If the Rangers can be convinced to let Profar walk, which is unlikely, the Sox would be forced to back off, because the Rangers would be overpaying, trying to outrun their own ghosts. This season has been found money for Sox fans, but trading for Garza would change it all, in an instant. With no team control after this year -- lest that rumored sign-and-trade possibility become more than that -- it would be World Series or bust, the latter of which is possibly far too painful for this swap to become a reality.