Pitching with two outs as well as with two strikes hasn't gone so well for Lester this season.

At the All-Star break, through 20 starts, there is no denying Jon Lester isn't having his best season, particularly from late May until now. Although he has an 8-6 record, his ERA of 4.58 is his highest since 2008 with the exception of last season. Much of this is due to his last 11 starts, where Lester is just 2-6 with an ERA of 6.41. While the Red Sox and Lester have continued to say his struggles are not health related, they have acknowledged the left-hander is not having a lot of success with his cutter. This may be related to his poor performance of late, but another is his inability to put hitters away with two strikes, and also with two outs.

On 0-2 pitches this season, opponents are batting .306 with an on-base percentage of .342 as well as with three home runs, giving him an OPS+ that's 282 percent worse than the league average in this situation. This goes along with his trend of not being as good with two outs, as he has allowed 29 runs with two down, compared to 10 with no outs and 21 with one out. Opposing hitters are hitting .295 with an OBP of .353 with two outs against Lester this season. This, however, does not match up with his past struggles, as last season he held opponents to a .145 average on 0-2 counts, and over his last three seasons combined, opponents are hitting .126 off Lester on 0-2 counts. So where is Lester going wrong this time around?

Below is a chart which shows opponents batting averages against Lester this season on 0-2 pitches put in play this season (courtesy of Brooks Baseball). Notice the number of pitches left out over the plate, including pitches right down the middle. Note: All charts are from the catcher's point of view. 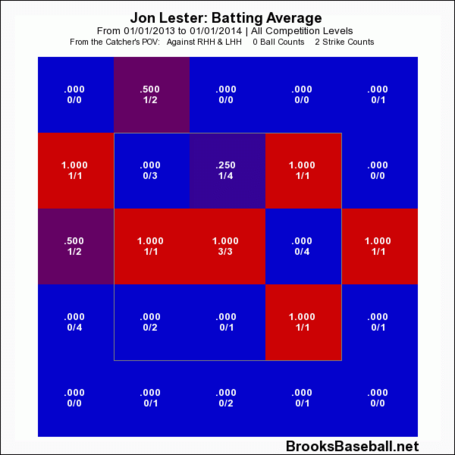 Comparing his .306 opponent batting average on 0-2 pitches to the rest of the Red Sox starting rotation (Clay Buchholz, Ryan Dempster, John Lackey and Felix Doubront) this season he is way behind, as those four have opponents hitting just .153 off them on 0-2 counts.

Below is the same chart as Lester's on 0-2 counts this season, but for Dempster. Notice how he keeps the ball away from the middle of the plate, and out of the entire strike zone for that matter, which goes along with his opponent batting average being just .049 on those pitches this season. 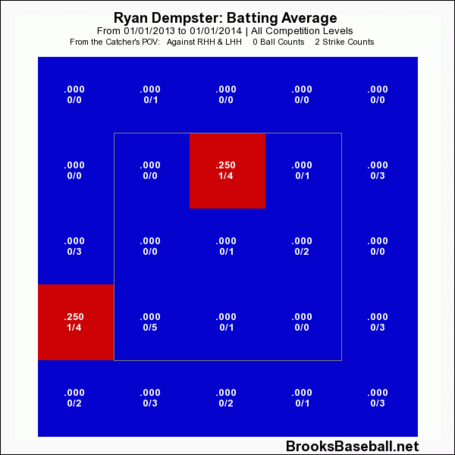 One of the first things pitchers are taught, even in Little League, is when you're ahead in the count 0-2, don't give the hitter anything to hit. Often times coaches instruct their pitchers to "waste" a pitch in this situation and make the hitter swing at a pitch out of the strike zone. Pitchers should very rarely allow hits on 0-2 pitches, yet Lester, as mentioned, has been giving up what is, comparatively, far too many in this situation. As he's been struggling with his command on and off, it makes sense that he would be punished for it in these situations where he should have the advantage -- obviously, Lester knows about keeping it away from the hitter, but just hasn't been able to consistently. 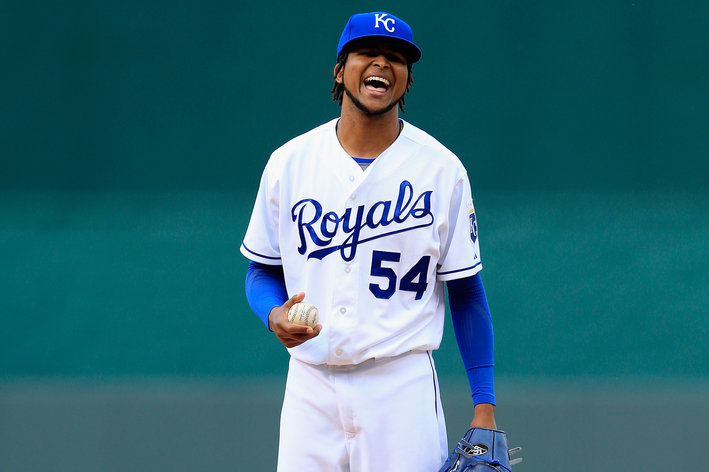 This is not to suggest Lester doesn't put forth the same effort in these situations, or that he does anything differently with two strikes as well as with two outs. It is just a trend that has continued for the majority of the season, and now, at the All-Star break and 20 starts into the year, it's something that merits paying attention to.

Many believe Lester will get things back on track in the second half of the season and pitch like the ace he was. While it is not out of the question, one of the first things that needs to be improved is his ability to get hitters out with two outs as well as with two strikes. Whether that's command or his cutter (or both) remains to be seen in the season's unofficial second half, but it's clear what the result of these struggles are.