The Red Sox might need some help at third base in the near future, and are keeping an eye on the current Phillies' third baseman.

The Red Sox and about a dozen other teams are keeping tabs on the Phillies' Michael Young, in case general manager Ruben Amaro finally admits his team should sell off something before the trade deadline, according to FOX Sports' Ken Rosenthal.

Now, checking in on Young is not the same as aggressively targeting him, by any means. Vice President of Player Personnel, Allard Baird, was scouting Young and the Phillies before the All-Star break, and Rosenthal says Boston's intention would be to use Young at third base. There are a few things to consider before you think the Sox are definitely going to end up with Young, however.

The Red Sox third base situation is in flux. Stephen Drew should be back from the disabled list this weekend, pushing Jose Iglesias back to third base, but the chances of him continuing to hit like he has -- Iglesias is at .367/.417/.461 -- are slim, and his bat is more of a problem at third than at shortstop. I don't mean to alarm you, but Iglesias has a 586 OPS in July, and his batting average on balls in play is still .414 for the year -- there's a lot of room to fall, even if you believe he's legitimately improved at the plate. Given this, Boston shouldn't push Drew off of shortstop in favor of Iglesias, considering that Drew has a split-adjusted OPS+ of 114 at shortstop this year, owns a much longer history of success, and has played excellent defense at the position himself now that he's that much further removed from his gruesome 2011 ankle injury and subsequent surgery. Holding on to Drew and leaving Iglesias at third for now leaves the Red Sox with two starters in the majors, as well as Will Middlebrooks, who is working his way back to the majors at whatever pace he needs to accomplish that goal.

Then there is Brock Holt, who, while not a third baseman, can likely play it as well or better than Young, and can at least make contact and produce a productive batting average if nothing else. If it's time to press the panic button, Xander Bogaerts is in Triple-A Pawtucket, and with a little more exposure at third base and against International League pitching, could be ready for some big-league exposure despite his youth. There's also Brandon Snyder, whom the Sox have already called up once for fill-in third base duty. His defense, like Holt's, might not fit the bill, but he should be able to hit enough at the position if forced into action. 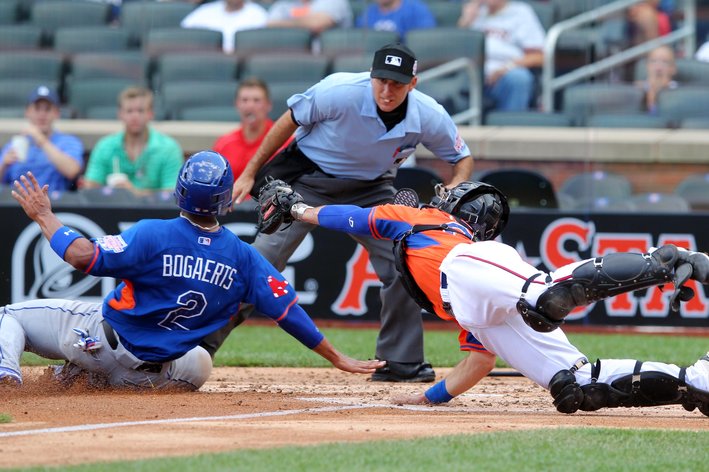 That's a whole list of options the Red Sox are working through for essentially one position, and it's also a lot of insurance for Iglesias, should his offense return to Earth with a resounding, sickening thud. None of them are necessarily a game-changer, save a full Middlebrooks' resurgence, and that's why Michael Young enters the conversation. Young is no savior, either, but he owns an above-average 104 OPS+ over the last three years, is at 108 this season, and, while he's a butcher in the field, he's by all accounts a positive clubhouse presence. That doesn't negate his defense, nor does it come close, but, given the way the Red Sox have remade themselves in just a year's time, you know they're at least thinking about that reputation and balancing that plus his bat against what is, in essence, an unproven lot -- while Young has his warts, so too does every single option in Boston's possession.

Aside from Boston's needs, the fact the Yankees could use him at both third and first base should also make you wonder if part of the Red Sox' interest is simply in making life more difficult for a division rival. Maybe they decide they don't need Young in another week or so, but keep themselves in the conversation if only to keep the price up for a player who, thanks to the Rangers contributing $10 million of his $16 million salary for the year, is pretty cheap.

It's hard to know exactly what Boston's intentions with Young are, but it's some combination of keeping themselves appraised of potential help at a position that could very well use it, while also limiting the options for their rivals who are searching for the same. That's basically all you can ask a team to reasonably do in July before the trade deadline when they lack any gaping holes on the roster.