Prospect word clouds return, and this time it is the position players getting all clouded up.

After looking at the Red Sox top pitching prospects in word cloud form at the end of last week, I set out to do the same thing with the top position prospects in the system. I returned to Baseball Prospectus, Minor League Ball, and SoxProspects.com for the source material, and after the realization that more is certainly better for this type of work, I also added prospect reviews from Fangraphs to the mix to increase the number of opinions without expanding the scope past this off-season. Xander Bogaerts, Jackie Bradley Jr., Blake Swihart, Garin Cecchini, Bryce Brentz, Deven Marrero, Jose Vinicio and Manuel Margot are the prospects included here, and the order above reflects the approximate weight each has as a result of the amount written about them. 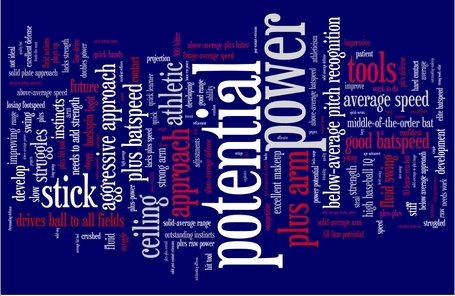 In addition to a higher word count, this second pass at creating a word cloud also reflects my other major realization from making the pitching prospect image. This time around, I took more refined approach toward editing the various critiques into a common set of phrases. I stopped short of re-writing adjectives to unify opinions, so "excellent defense" does not get revised into "plus defense," but I did try to bring together similar phrases. "Need work," for example, is a phrase that is often stated in many different ways and I have tried to condense many phrases that boil down to the same critique into one single phrase for the our purposes here. I have also tried to make sure that negative comments do not add to the weight of isolated words. So when a word like "athletic" appears in the word cloud, it includes phrases like "will need to maintain athleticism" which implies a player (Margot in that case) is athletic now, but it would not include "not very athletic." Negative comments are phrased as such -- for example "lacks batspeed" -- to ensure they are differentiated.

Overall, I think these changes are a substantial improvement on the basic concept. They make the entire process far more time consuming, but the upside appears to be worth it. There is still room for refinement in the editing process, but I believe this image is a solid-average-to-plus depiction of the strengths and weakness among the top position players in the Red Sox system in simple visual form.

The two most prominent words are "potential" and "power" and it is fitting that they appear close together here. Potential is the larger of the two. This is because projection plays a major role in the prospect reviews of Red Sox players here. Power is more complicated then just strength and so young players require scouts and experts to make educated guess on how traits like batspeed (note the prominence of good batspeed here) and swing path will translate as competition improves. The Red Sox system is well stocked with players with power (Brentz and Bogaerts) power potential (Cecchini, Margot, Swihart) and other iterations of the word, like gap power and doubles power, which both show up here. In all its iterations, power is a major positive talking point for Red Sox prospects. 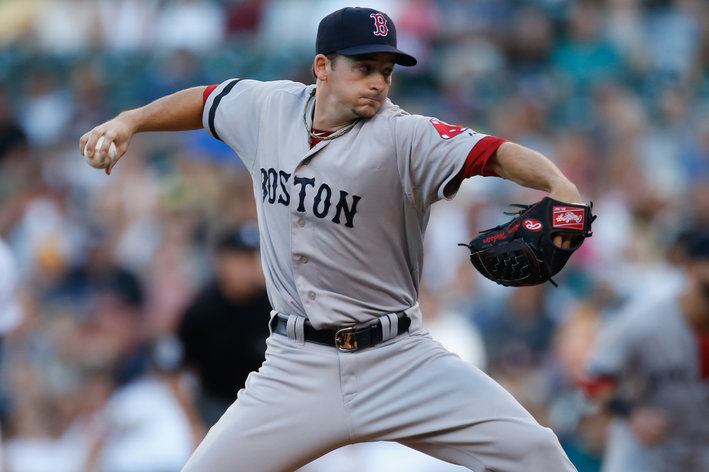 If you are wondering what the experts are saying about the Red Sox top pitching prospects and you love word clouds, today is your lucky day.

The size of several related terms like "drives the ball to all fields," "approach" and fluid swing" is especially encouraging in relation to power and overall hitting potential. There is also "aggressive approach" popping out at us, though and that is not as good. Bryce Brentz and some of the younger players included here are primarily responsible for that term's weight and it does serve to show that while the Red Sox value patience, they aren't scared off of talent players with good swing mechanics who have yet to figure out the zone.

The current crop of Red Sox position players share two overall qualities that really stand out; they are athletic and they have a strong feel for the game which is visualized here with the prominence of comments relating to "instincts," and the term "high baseball-IQ." Another related term, "Plays up," also registers here in a small way. It isn't mentioned often, but I bring it up because it is an interesting phrase that really captures what I like most about the young talent in the Red Sox system. Many of these players are less impressive in their "tools"* then they are in their results and scouts seem very willing to credit their feel for the game for this difference. No player included here better exemplifies the idea of tools that play up better Jackie Bradley, who gets the highest marks for defense despite a consensus opinion that he has average speed. At the big league level, Dustin Pedroia would be the "plays up" poster child since just about everything he does plays up to a level well above his tools. Any time you are doing things Dustin Pedroia does, you are probably doing something right.

*Tools is fairly promenient here, but this is more because tools are a very common talking point for prospect experts and not because the system is rich "tools" guys. "Toolsy" doesn't even register here.

This whole idea of playing up helps explain another term that gets some weight here- "stick." That word isn't being used as a synonym for bat in this case. Here, it refers to scouts' belief that a prospect can play the position they are at now as they progress through the system. "Xander Bogaerts can stick at shortstop in the short term" for example. It is essentially a positive term, but it also reflects the need to clarify something that isn't a given. From this visualization, it seems that many Red Sox prospects are basically expected to wrestle their positions to a draw. With the exception of Bradley and the two young shortstops, position is seen as an open-ended question for this group, even if opinions are generally optimistic.

It is hard to look at these words in isolation like this and not feel good about the Red Sox position player prospects. My system for editing terms is still far from perfect, but I feel confident that different systems would all produce their own unique set of terms by this method, making it a viable way to visualize what skills different teams are developing at any one point in time. The added word count also makes it possible to get some interesting results on the individual level, which did not quite happen with the pitching prospect clouds. Below are several word clouds for individuals for your viewing pleasure. 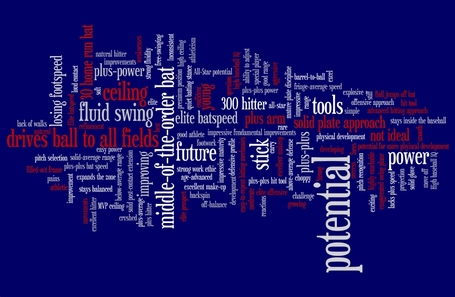 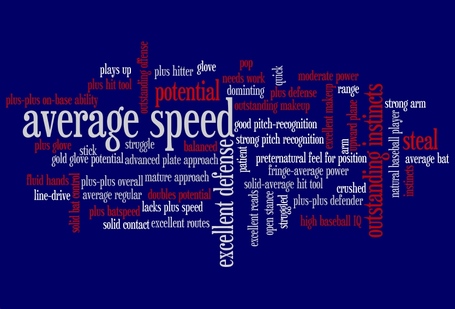 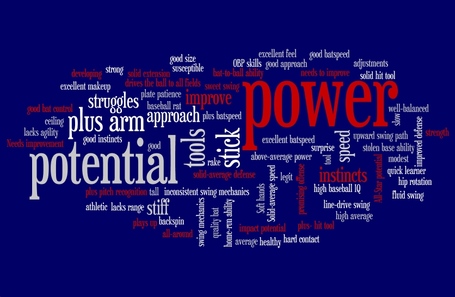 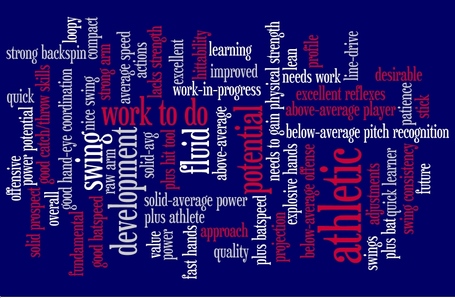