With Alfredo Aceves outrighted, will the Red Sox add Ryan Rowland-Smith before he opts out?

All Rowland-Smith has needed was an open spot on the 40-man roster, and that is now available.

Share All sharing options for: With Alfredo Aceves outrighted, will the Red Sox add Ryan Rowland-Smith before he opts out?

Ryan Rowland-Smith can't be added to the big-league roster for a couple more weeks, as an appendectomy performed in June has kept him off of the mound until he recovers. That procedure doesn't change the opt-out date on his contract, though, one set for Monday, July 15 according to Chris Cotillo. With that in mind, will the Red Sox add him to the 40-man roster now that there's an open space, with the intent of bringing him to the majors once he's recovered enough to make that move? 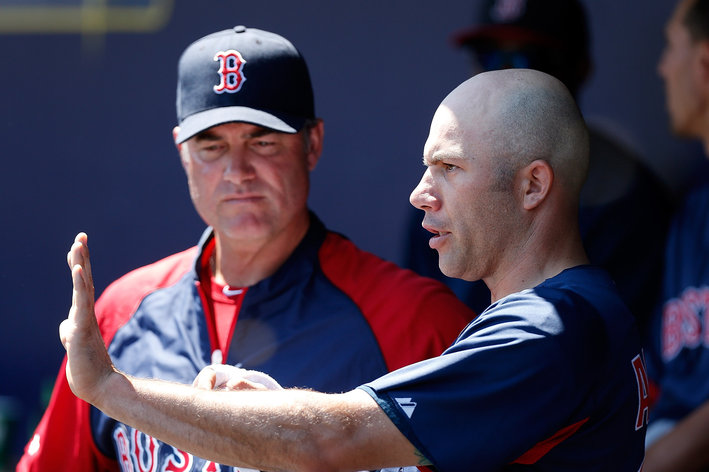 The Red Sox and Alfredo Aceves seem ready to bring an end to a lengthy, tumultuous relationship.

That opening on the 40-man comes courtesy of Alfredo Aceves, who was outrighted rather than simply optioned to Triple-A Pawtucket last week. After clearing waivers -- a non-move that means 29 other teams did not want Aceves on their 40-man roster -- he came off of Boston's 40-man, and is now just like any other minor-league arm in the system that doesn't take up a roster spot. Unlike with Rowland-Smith, though, who is currently in that position, Aceves can't opt out of his deal to become a free agent.

The Red Sox likely don't want Rowland-Smith to go anywhere, not with the injuries they've dealt with in their bullpen. The 30-year-old has dominated in Triple-A -- as a 30-year-old with four years experience in the majors should -- but more important might be his big-league numbers. Rowland-Smith's struggles, in many ways, had more to do with the role the Mariners had him in than any problem with Hyphen himself. As a starter, over 269-2/3 innings, Rowland-Smith struck out 4.4 batters per nine and allowed a .274/.338/.468 line, despite a home park that's very friendly to pitchers. As a reliever, however, Rowland-Smith punched out nearly double the rate of batters, at 8.6 per nine, while posting a 2.3 strikeout-to-walk ratio and 3.68 ERA over 93 innings.

That doesn't make him a perfect reliever, but he's long been better in his first 50 pitches than in his final 50 of an outing, a fact that basically screams for a bullpen role, as he can't handle a lineup multiple times through the order. Set the lefty up in a position where he doesn't have to, though, as the Mariners have done in the past and Rowland-Smith has done at Triple-A Pawtucket this year, and you might have yourself a useful bullpen piece at a time when one is necessary. Considering the Red Sox called up Drake Britton, who has barely been in Triple-A and didn't pitch well against righties at Double-A, you know they're still looking for ways to improve against lefties even after the Matt Thornton trade, so Rowland-Smith could have a place in Boston.

The roster space is there, and even if the Red Sox can't bring him to the majors on Monday, given his appendectomy recovery, they do have that open space waiting for him now that Aceves is out of the picture. We'll find out soon if Rowland-Smith has decided to stay or go, but, given the needs in Boston's bullpen and the desire to find out what they have and what they could still use before the trade deadline, it would make a lot of sense to keep Rowland-Smith around.