How advice from Adrian Gonzalez may have helped David Ortiz turn into the hitter he is now: not just hitting home runs, but able to use the entire field.

Once David Ortiz came to Boston in 2003 he became one of the most feared hitters in all of the major leagues. The left-handed hitting slugger was belting home runs left and right, hitting over 40 for three straight seasons from 2004-2006, including a career-high 54 in 2006. The RBI were also massively accumulating in that time period as well, as from 2003-2007 Ortiz averaged 128 RBI, including 148 in the 2005 season. Ortiz led the Red Sox to two World Series titles in his first five years in Boston, and was rightfully considered one of the best hitters in the game.

Read More: David Ortiz sets record for most career hits by a DH

By the end of the last decade, it became apparent the way to get Ortiz out was to pitch him away and not come inside on him, as he would just drive the ball to right field, sometimes completely out of the ballpark. When pitching him away, Ortiz would still try and pull the pitch often resulting in weak ground balls to the right side and pitcher's being able to get him out.

Below is a chart (courtesy of Brooks Baseball) of Ortiz's hit zone from the 2009 season, which shows him struggling with pitches on the outer half of the plate; on those pitches in the strike zone he hit a combined .249. (These charts are from the catchers' point of view.) 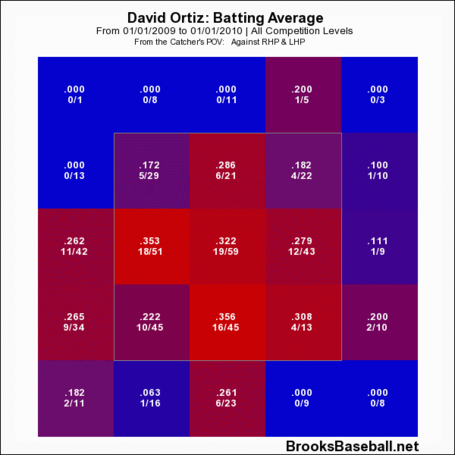 Clearly, Ortiz needed to be better at hitting the outside pitch and his adjustment may have came from talking with Adrian Gonzalez, one of the best left-handed hitters in the game. Speaking with Gonzalez once he joined the Red Sox in 2011, Ortiz seemed to have a new approach: going with the outside pitch and taking it to the opposite field. This strategy would be particularly effective because of the Fenway Park's Green Monster in left field, making it easy for Ortiz just to go with the pitch and push it towards the sky-high wall, often resulting in doubles or long singles.

This season is a perfect example of how this change in approach is paying dividends. Even at 37 years old, Ortiz is putting up impressive, career-best numbers and is back to being one of the most feared hitters in the game.

Below is a chart from this season (from Texas Leaguers), up until July 10, of the pitches Ortiz has swung at. Notice the majority of them are from the middle of the plate out towards the outer half of the zone.

Now look at Ortiz's hit zone from this season and notice the improvement on pitches on the outer half of the strike zone. The slugger is hitting .379 on those pitches, a 130-point improvement from 2009. 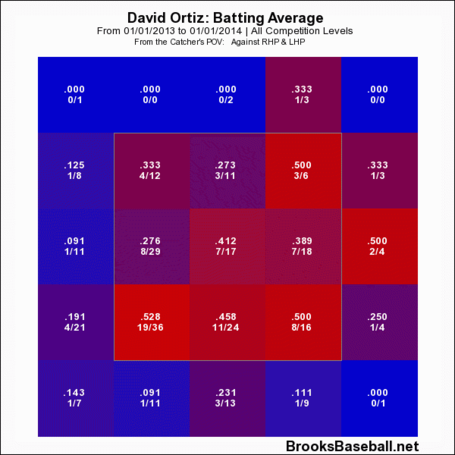 His spray chart for 2013 also is a good indicator, showing the designated hitter's ability to use the entire field, particularly the opposite field. (Courtesy of Texas Leaguers)

The overall numbers back up the claim that Ortiz's new approach at the plate has made him into a better hitter than he was. From 2008-2010 he hit a combined .257, but yet from 2011-present (also since Gonzalez and he talked hitting) he is hitting .319. The new approach has continued to keep Ortiz as the Red Sox' best hitter in the middle of their lineup, as going into Friday he was leading the team in both home runs (19), RBI (65), and is first among qualifiers in batting average at .327.

While Ortiz may not be putting on the powerful home runs displays as in his early years with the Red Sox, with his new hitting approach he is putting on a new type of display -- how to hit to all fields and with a new-found approach. Ortiz has been able to hit into his late 30s and continues to be a must-see attraction each time he takes to the field.