Boston will leave no bullpen unturned in their quest to upgrade their own.

The Red Sox are asking just about anyone who might be dealing relievers about said relievers, it seems. The latest team they are linked to is the Giants, who, according to FOX Sports' Jon Morosi, the Red Sox "checked in with" in case the last-place Giants decide it's time to sell. The Tigers, possibly even more desperate for bullpen help than Boston, also asked in on San Francisco's bullpen. 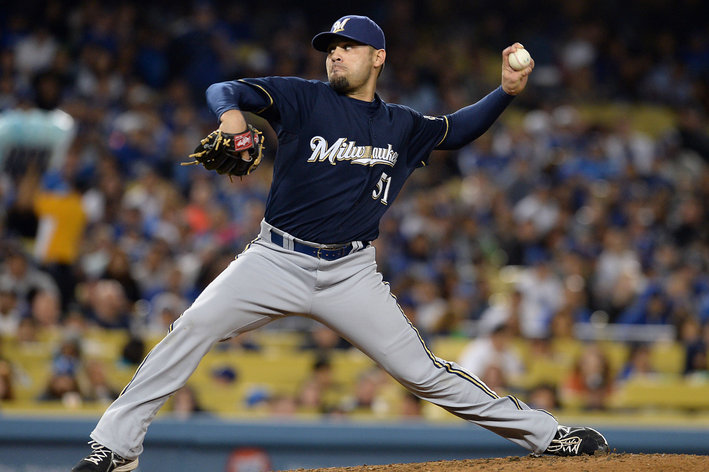 Boston is looking to Milwaukee for help in their bullpen, and might have to considering Chicago's prices.

Morosi didn't name names other than former Sox lefty Javier Lopez, who is a free agent after this season. He's 35 years old, making $4.25 million, and has a 1.64 ERA over 38 games and 22 innings. Lopez, as he so often does, is walking batters, and not striking out overly many, but is an extreme ground ball pitcher who has given up one homer total since the start of 2011. As the more talented members of Boston's bullpen are a bit homer prone, adding someone with this specific skill would be a huge boost to the Red Sox relief corp.

With that being said, Lopez could be expensive. SB Nation's resident Giants expert, Grant Brisbee, warns that both Giants' manager Bruce Bochy and general manager Brian Sabean are big on Lopez, and will likely demand a high-quality return for him, or, at least, more quality than an inquiring team might be willing to pay up. He does, however, offer a suggestion if the Red Sox are concerned about prospect cost:

Jose Mijares is a solid LOOGY on a team that already has a solid LOOGY. Because of that, he has to face a lot more righties than he should, and I'm wondering if the Giants would give him up on the cheap to get a more versatile 6th/7th-inning guy on the roster. The Giants are also 7-28 when he comes into a game this year, so maybe I'm just superstitious.

He's a heckuva LOOGY, though, when used correctly.

Mijares doesn't sound like a straight-up replacement for what Andrew Miller provided Boston in the first half of the year, but, to be fair, it wasn't even clear if Miller was going to be that guy. If the Sox could get Mijares in a low-cost trade, they would have a LOOGY under team control for both this year and next. So long as he doesn't face right-handers, things should work out: He's limited lefites to a 595 OPS in his career, with nearly four times as many strikeouts as walks against them.

It's no guarantee the Sox end up with either -- or even ask about either -- but they seem to have a pretty clear type that they're thinking about bringing on board, now that Miller is out for the year. That makes sense, as, while there are plenty of right-handed options in the system and even already on the team who could step up during the remainder of 2013, lefties are a bit tougher to come by in the Sox' organization.