The Red Sox ran a gauntlet in June, and came out the other side looking better than ever.

Share All sharing options for: The Red Sox did more than survive in June

The Red Sox are more than a little confusing. They came out of the gates hotter than anyone in an April where they were supposed to start out on bottom. They struggled immensely with a relatively easy portion of their schedule in May, leaving them without the cushion many thought might be necessary as they headed into a far more difficult June.

How difficult was June? To give you an idea, the average Red Sox opponent would lead the NL West. They faced that level of opponent 28 times in 30 days, and if you draw that line backwards through June, you reach 46 games of baseball in 48 days. This was a Red Sox team at, arguably, its most exhausted.

The Red Sox offseason: A look back 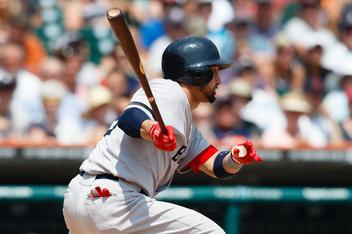 Now how did we get here again?

The Red Sox were imperfect, of course. They didn't really do as well as Sox fans might have hoped in their biggest series, going a collective 2-6 against the Orioles and Tigers (though that number could've been different with the Tigers). Still, at the end of the day it's the Red Sox who have seen their division lead grow. While the Tigers now sit even with the Indians atop the AL Central (admittedly, their initial lead was all of a half game), the Red Sox have increased their lead over the Orioles by one game and gaining some much-needed separation from the rest of the division. On June 1st, the first-place Red Sox and fourth-place Rays were separated by all of two games. Now the Sox enjoy a six-game lead on the third-place Rays.

For what it's worth, that also leaves them with a five-game lead over the Indians and Tigers, who currently sit as the runners-up for the second wild card spot.

It gets easier from here-on-out, if not easy. With the AL East competition still in the mix, the average Red Sox opponent in July has a .502 winning percentage, and unfortunately a good few of them also happen to be on the other side of the country. We all know how well that always goes. And if the rest of the league shares most of Boston's days off thanks to the All-Star break, well they've all been more rested then the Sox throughout the season anyways. It's Boston that stands to gain most from the break.

It's not time to start penciling in a 20-5 month. Not only because the competition really isn't that bad, but also because the last time it seemed the Sox were headed for an easy stretch they went into a tailspin. That can always happen again, loathe though we might be to admit it. Still, after a run like this through a month like June, the Red Sox have earned the right to pat themselves on the back. Where they might have been expected to falter and fail, they instead thrived.