The Red Sox rotation is doing pretty well when you consider their ace, Clay Buchholz, missed most of June with injury, and another hurler, Jon Lester, can't seem to figure out if he's regaining his form or continuing his decline. Still, even with the success they've managed to this point, it's only the start of July: there is always the possibility of an upgrade. With that in mind, the Red Sox are reportedly following the Cubs around on the west coast portion of their current road trip, in order to scout Chicago starter Matt Garza, according to the Chicago Tribune's Paul Sullivan:

Epstein might deal a handful of players by the end of July, and the most coveted is starting pitcher Matt Garza, who would land the best prospects in return.

Teams are scouting the Cubs heavily and will continue to do so until the July 31 trade deadline. The Red Sox have sent their main scout, former Cubs assistant to the general manager Gary Hughes, to follow the team on the West Coast portion of the current nine-game trip. The Cubs know the Red Sox system well and figure to be asking for two or three top prospects in return.

It's hard to tell just who said prospects would be, as Garza has dealt with injuries -- the most recent a latissimus dorsi strain that kept him out until late-May -- but has overall pitched well since coming to the Cubs in 2011. He won't be cheap (he might not be super expensive, either), but if he's the final piece of the puzzle in a rotation that very well might be looking for that sort of thing on July 31, then that isn't an huge road block to negotiations, especially not for a team with prospect riches like the Sox. 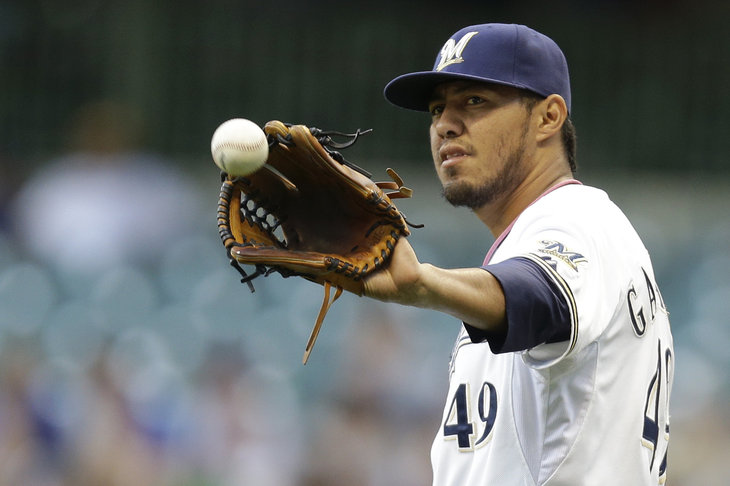 Yovani Gallardo can block a trade to any of ten teams, including the Boston Red Sox.

If the Red Sox rotation looks strong by late-July, though, with Buchholz back, Lester at least pitching competently, and depth pieces like Allen Webster building on recent success, then that changes the discussion and need -- Garza would still be an attractive trade piece, but might not be worth the high cost to the Sox contextually. If Boston has trouble with injuries, or one of their starters becomes a liability, however, then Garza looks that much more necessary. This is why the Sox are scouting him now: to get as much information on him as possible leading up to any possible trade discussions.

Garza posted a 109 ERA+ over three years with the Rays in the American League East, and has seen similar success, albeit with more strikeouts, in his two-plus seasons with the Cubs. If he can stay healthy, he's an above-average arm that can help to stabilize a rotation. Were the Red Sox to acquire the impending free agent, they would not be able to submit the qualifying offer to him this off-season, as he would have changed teams after Opening Day.