Is Boston's bullpen overused? Or are we all just crazy?

It's felt like every game brings another big bullpen crisis for the Boston Red Sox. And yet...the numbers suggest their situation is far from unusual.

Share All sharing options for: Is Boston's bullpen overused? Or are we all just crazy?

For some reason, the Red Sox' bullpen always seems to be exhausted. Whether it's a closer who's pitched three days in a row, or a group of middle relievers who combined for some seven innings in a lengthy extra-innings game the night before, it's day after day without the bullpen ever seeming to be rested.

So what's the deal with that?

The immediate assumption many around these parts--myself included--have jumped to in weeks past is that it's the fault of the starting pitching. It seems rare that they go deep into the game, leaving the bullpen with plenty of innings to eat, doesn't it? Well, it's not common, exactly, as the Red Sox have only had 28 starts of seven innings or more. That may not seem like much after 84 games--conveniently enough, it's one-third of their starts--but it's actually above average. Major league teams average all of 24 starts of seven-or-more innings so far this year. The Sox stay solidly above average when considering six-inning outings as well.

It's not that the Red Sox are running their bullpen ragged with extra-long outings too often either. At least not relatively speaking. They've only had starters go less than four innings four times, compared to an MLB average of over eight.

Perhaps, then, it's that the Red Sox' starters just don't give them those extra couple innings at the end often enough, forcing their best relievers into the game too often? It's possible to pitch seven innings more often than most teams and still not throw as many innings as other teams' rotations might. But here, too, the numbers don't prove out. Boston's rotation is once again above average in innings per game.

For the record, it also doesn't make sense that it's simply too many high-leverage innings. At +80, the Red Sox have one of the largest run differentials in the game. Sure enough, they've played in relatively few extra-innings and one-run games compared to the rest of the league, and the leverage index (a metric designed to measure how high-pressure the situations a player faces are) for the pen is one of the lowest in the game.

It's probably also worth mentioning that they simply sit around average in terms of relief innings pitched. In case you wanted to get all simple about it. And for the record, the shift in all of these numbers is, surprisingly enough, negligible when moving between the AL and NL. Perhaps the need for strategic pinch-hitting hooks balances out the easier opposition in a league with lineups at most eight deep. 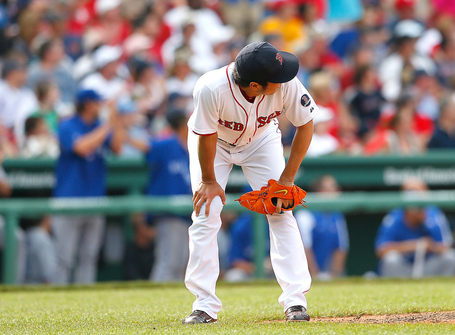 So what's going on? I'd like to posit a few possible explanations:

Simple as can be, the Sox have played 84 games--the only team so far into their season--while much of the league finished Sunday at 82 or 81, some as low as 78. That doesn't seem like a huge difference, but think of all the times a day off would've been the perfect thing for the pen. Or how many doubleheaders have put it through a ringer. Whether it's the end-all, be-all cause or not, it's certainly not helping that the Sox have simply played more games than the other 29.

"But wait," you might say, "didn't we cover this with the run differential thing earlier?" Yes, but consider this: are you more likely to use one of your better three relievers when up three runs in the seventh, or down three runs? It seems to me like the team that's ahead a middling amount is much more interested in keeping the score from getting any closer than the team that's behind a middling amount is in keeping it from getting any further apart. 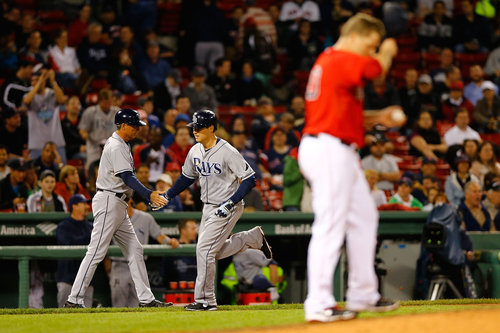 Still, nobody is going to say no to some extra help...

So what does that mean? That means Junichi Tazawa and Koji Uehara in games that are "close," but not really that close. And it means that happening often since the Red Sox are the sort of team that finds themselves with three-run leads a lot more often than they find themselves facing three-run deficits. Unless you're always winning with complete blowouts, a winning team is going to need their better middle relievers more often than not. Which leaves the Red Sox less able to absorb meaningless innings with less important arms.

Sometimes when looking for answers, we should actually be questioning the question instead. Looking at the above numbers, which show the Sox to be average or above average in just about every meaningful measure of reliever usage and their starters' ability to eat innings...well, doesn't it make more sense to assume that the Red Sox are just average? That we're not the only team with tired bullpen arms, and if ours are slightly more taxed, it's because of those other mitigating circumstances--the Red Sox winning and playing more than other teams. A perfect storm of misperception and circumstance that leaves us feeling a lot worse about a situation that's, frankly, not so bad as it seems.