Walking anyone to get to David Ortiz is probably a terrible idea.

You ever just feel a home run coming? Here's the scene: Dustin Pedroia is intentionally walked in the ninth inning of a 3-3 game so that the Rangers can face David Ortiz with a lefty on the mound. The thing is, this isn't 2009 anymore -- Ortiz has little platoon split in the last three seasons since changing up his approach to revitalize his career, and had 20 homers against lefties since 2011 in 366 at-bats coming into Thursday's game.

Make that 21 homers against lefties:

Obviously, winning was huge. But for some reason, this is just as exciting -- probably because you know the IBB bothered Ortiz, who is never better than when he feels he or his talent have been slighted in any way. This is pretty much the pinnacle of Ortiz homer trots:

It was actually such a long walk to first base that I couldn't get all of it in a single GIF. He high fives teammates before he even gets really running to first, though, and eventually takes over 28 seconds to complete the entire home run trot, according to the always informative Tater Trot Tracker.

Then, of course, we're treated to his shirt, once his teammates ripped off his jersey at the plate: 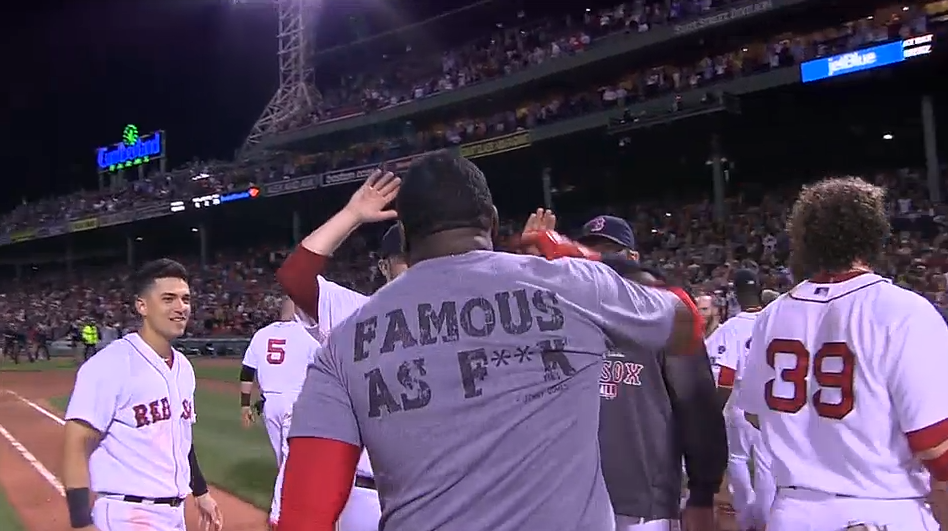 Sadly, the players made those Boston Strong shirts for themselves -- there's a silhouette of a player with both fists raised, as Sox players have been doing after extra-base hits, on the front. That doesn't mean we don't all want one, though.