Modern sensibilities may look more kindly on Dwight Evans, but it was Jim Rice who is remembered for defining the era of Red Sox baseball.

Share All sharing options for: Jim Rice: a lasting impression

Growing up in Boston, you learn about your heroes. You learn about Fisk waving his home run fair. About Yaz and the Impossible Dream. About the four men who are now cast in bronze outside Fenway's gates. Even as far back as Cy Young, though by then, in those pre-Fenway days, the connections seem to become slightly frayed.

I grew up in the 90s. I'm sure to a good many of you, that leaves me awfully young, and with relatively little experience with this team of ours. That's true. I never saw Ted Williams except when he waved his cap at the 1999 All-Star game. Pesky and Fisk and Yaz are names connected to two different faces--the ones on the baseball cards, of stars in their primes, and the others the ones we see in interviews so many years later.

The first Red Sox heroes I can remember as Red Sox are Roger Clemens, though he no longer really counts having spent so many years in New York, and Mo Vaughn, if you're willing to give him that recognition (for all his issues, he certainly set the standard at the plate for the team). Directly before that, though, is where you hit an interesting point: the 80s. To me, the decade of the living legends, whose effect on the team was so recent, whose memory was so fresh in the minds of Bostonians, that it was almost as if they were still themselves hanging around the team.

From there it's easy to pull names. But one truly stands above them all: Jim Rice. 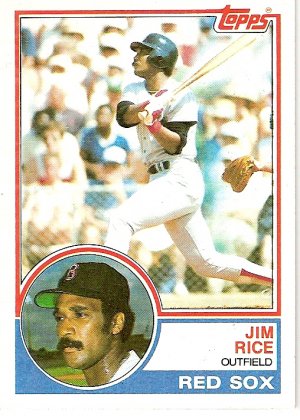 Had I been watching the game for myself at the time, paying attention to the sorts of things we do these days, Rice may not have posed quit the figure. Indeed, statistical looks at rice, while kind, do not provide the same impression that a story about his role as one of the most feared hitters in baseball would. In fact, by the time the 80s rolled around, Rice had already had his best years.

Still, he would persist for the next decade, and while time can take much from a man, particularly in the department of what makes a baseball player valuable, it could not rob Jim Rice of his reputation. If his performances, particularly at the very end of his career, were often mundane, his shadow was anything but. Here was the man who hit the home runs, who drove men in left and right. Here was the man who defined Boston baseball during his career.

That last title is, perhaps, unfair to some players. With the advantages of modern sensibilities, and many years of recorded statistics, Dwight Evans stands out chief in my mind amongst them. For whatever reason, though, it was Rice who eclipsed all others. Perhaps because of the three stats listed most prominently on the cards at the time. Perhaps because of all the All-Star games those numbers brought him to. Perhaps because of something more--a gravity Rice brought that Evans did not?

For whatever reason, it's Rice who stuck out. It's Rice who made his way into the Hall of Fame. And if they told stories of Dewey, and compared whatever new right fielder the Sox had to him, Jim Rice was always the man who was not to be matched.

Topps Archives Baseball is a celebration of the 70s, 80s and 90s, what many consider to be the glory years of card collecting. If you collected Topps Baseball Cards during these years then you will love Topps Archives Baseball. Look for autographs and memorabilia cards from today’s stars and your favorite retired players on classic Topps card designs.