It's Baseball America's last mock before the draft itself, and Boston's target has changed once more.

This is it: it's finally MLB draft day. That means prospect analysts will unveil their final mock drafts with the latest news heading into Thursday night's event. The first of the bunch to do so is Baseball America's Jim Callis, who has once again changed who he thinks the Red Sox will select with the seventh-overall pick.

Callis had said it would be Clint Frazier in the first two versions of his mock draft series, but switched over to Austin Meadows a few days ago, after learning that the Boston front office was split on their preference. With less than 12 hours until selection time, though, Callis has gone back to his original pick of Loganville High School outfielder Clint Frazier, he of the insane bat speed, potential to stick in center, and blazing speed. 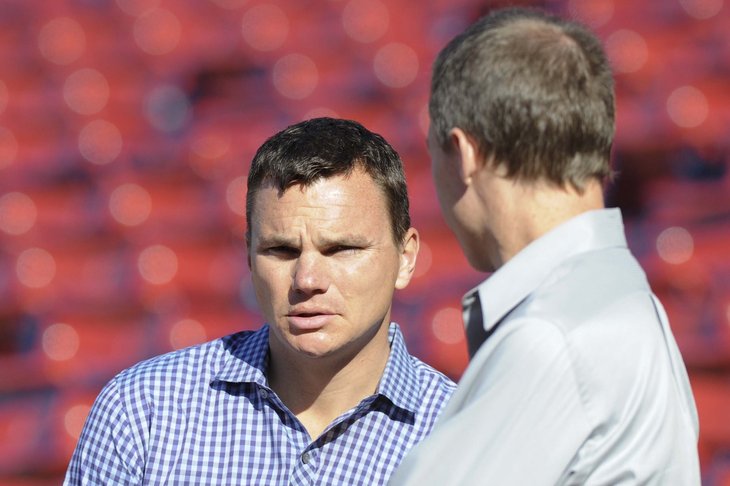 There's no real consensus for Boston yet, but there are two players who stand out.

It's not as simple as just saying it will be Frazier, though. If high school starting pitcher Kohl Stewart is not picked at #4 by the Minnesota Twins, the Red Sox might skip Frazier to add another arm to their farm system. Frazier could also be picked at #5 by the Cleveland Indians, unless they take Colin Moran -- if Frazier goes to Cleveland and Moran remains available, all of a sudden it's down to Meadows and Moran at #7. There are a lot of moving pieces in play here, and things will get even more confusing if Peter Gammons' report that the Rockies might take Dominic Smith at #3 instead of the expected pick, Kris Bryant, proves to be true.

Jonathan Mayo of MLB.com and Kiley McDaniel of Scout.com have also selected Frazier to the Red Sox, as has SB Nation's own John Sickels. Frazier is the closest thing to a consensus pick that is out there, with Meadows now falling behind sans the support of Callis. Whether or not he proves to be the pick is something we'll need to wait and see, as the combination of the six teams picking in front of them with Boston's own reported indecision on the matter leaves a lot of wiggle room between now and then.