How the Red Sox shaped my life

A story of a glacier, a championship, and coming to terms with the team you love.

Share All sharing options for: How the Red Sox shaped my life

Thousands of years ago, a glacier passed Providence moving southeast before receding about 100 miles further, leaving the rocky and now scarcely inhabited Elizabeth Islands, the hilly-on-the-western-edge Martha's Vineyard and flat Nantucket in its washout. From these islands, modern man can watch, listen to and read about Boston sports, in keeping with their regional duties.

If the glacier created the architecture that is the New England landscape, the architecture of being a Boston sports fan is built into regional society. What is it that makes Boston sports so appealing? And what is it about the Red Sox that makes them the de facto big men on campus, so to speak? While other teams can grab the limelight with titles and star players like Russell, Bird, Brady and Orr, the Red Sox are self-perpetuating. Sox players don't create the narrative, they slide into it.

For far-flung residents of the Boston media market -- North Hamptonites, Dixville Notchers, Vineyarders -- sports can feel like a lifeline to the region's nerve center. As children, when every day can seem like an eternity, the idea of going to Fenway Park can feel like your own personal glacier ride, and when the day comes, the glacier recedes, leaving a blank, flat slate in its absence, the tableau for your life as a sports fan. Every subsequent trip to Fenway is reliving the past in some way. It's either the exception to the rule that such a thing is impossible unless it's evidence to the contrary, or a crutch to hold us somewhere in the middle in the thing we call life.

I trust everyone whose first trip to Landsdowne felt like an eternity in the making remembers their first Fenway visit. Mine was in 1986. We were living near Washington, D.C., and we were visiting the hub for one reason or another, but I considered myself a Red Sox fan by dint of being born in Boston. On our trip I suggested we visit a game and picked up the newspaper to show my dad that one was happening on the following day, and we went to a misty Fenway. I remember two things about it: One, Roger Clemens wasn't pitching; and two, my parents bought me a kids version of the Red Sox satin jackets that the managers wear that I'd lose the next time I wore it, at a bowling alley. If my purchases at redsox.com and Modell's over the past two decades have proven anything, I'm still living in the past, trying to get it back. If capitalism preys on naïve emotions via officially licensed produced, here's my exhibit A through Zubaz. (I do not own Zubaz.)

How far have I gone to reclaim that feeling? All the way, basically. On another trip to the region three years later, with my now-single mom, brothers, and her brother's family, we went to Martha's Vineyard on my uncle's advice. I was happy because this meant every Red Sox game was on television, and at age 11 I watched every one when not getting sunburned or poking my head into former umpire Ron Luciano's books, which I was devouring at the time. My brothers enjoyed themselves as well, and during the trip we told my mother that we wanted to move there. Newly divorced, she told us to find her a job, so I picked up the local newspaper and circled an advertisement for a new library director in West Tisbury, the island's center-cut town. Four months later, we moved.

I had trouble fitting in at first, but the Red Sox had been my way into this mess, and they were my way out. Teachers would talk to me about them before the kids warmed up, and eventually some did, thanks to talk about the Sox and the Bruins, who were also great at the time. When I went off to college, in Chicago, I spent most of my time at the newspaper office, which was jammed with Boston-area kids, and edited the sports section, which had become something of a Boston-only zone.

When I moved to New York after college, I was practically closer to Boston than I had ever been (traveling to and from the island can be difficult, especially as a teenager), but felt farther from the Red Sox than ever. I overcompensated and went to virtually every Red Sox/Yankees game between 2002 and 2004, except for the 2004 playoffs, which I watched as a nervous wreck from couches in Manhattan and Queens. My lasting memories of the era are of leaving the Grady Little game after Aaron Boone's homer and, the following year, dancing in the street to "Dirty Water" outside the Riviera on 6th Avenue after the World Series win, guarded by NYPD officers looking sour in their Yankee blue, clearly still scarred by Dave Roberts' avalanche. 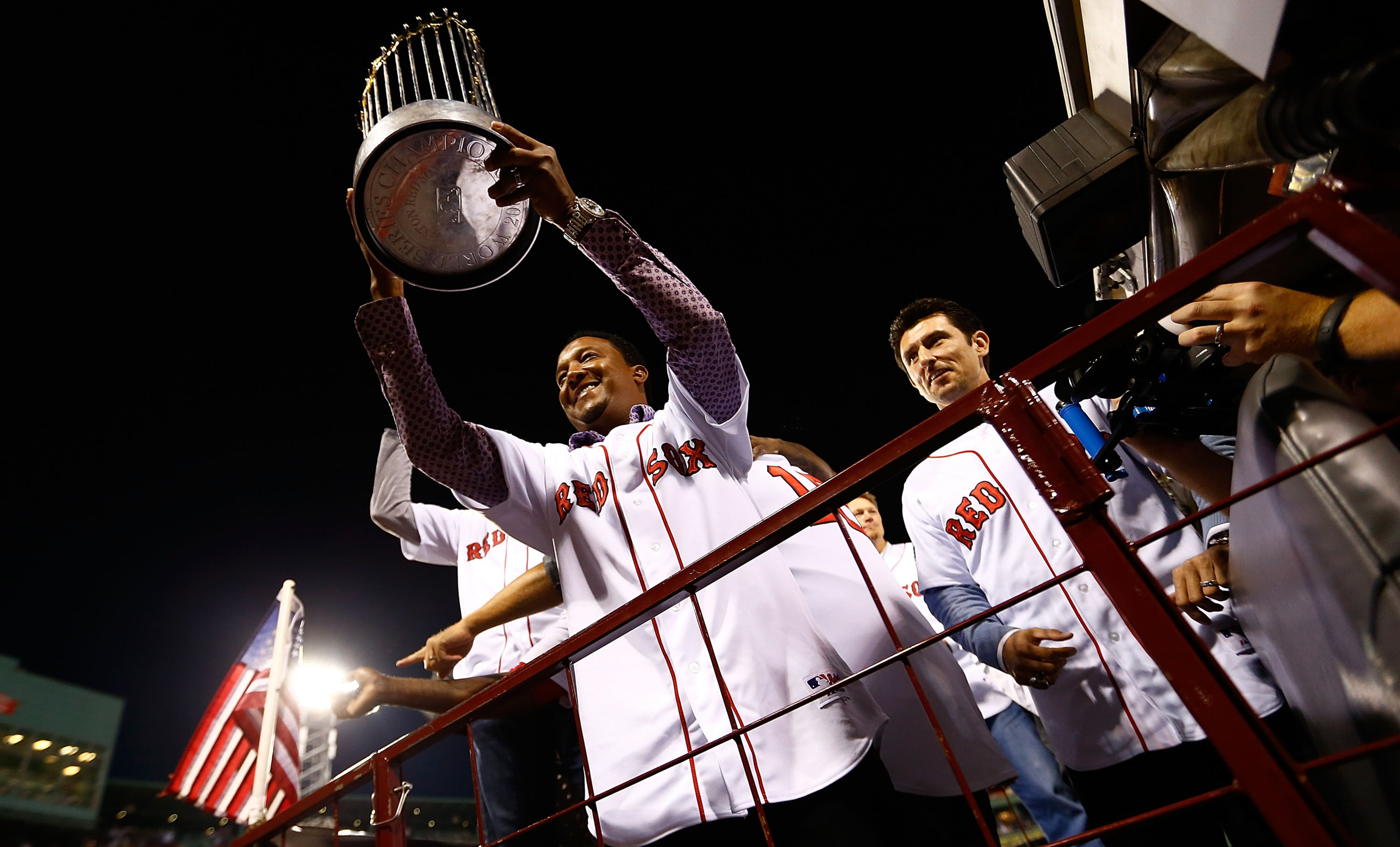 Then, like many Boston fans, I was reborn. Previously I had dreamt daily of what it would be like when the Sox finally won, and the reality had somehow outstripped the dream. I was content to bask, but found that, while I wasn't alone, I was in something of a minority. When El Duque helped Chicago sweep the Sox out of the following year's playoffs, Sox fans I knew went back to being miserable. In New York, with my feet underneath me, and still in the glow of the epochal victory of the prior year, I didn't feel miserable. I felt nothing. My compass was spinning. My brothers had both gone to far-flung colleges, my mother didn't even live in the region anymore, and I no longer felt I was fighting the good fight as a Sox fan. They had won, and that's all I had ever wanted, but I had wanted it bad enough to basically move my family there, and to give my brothers, neither of whom remembers Maryland life. In some ways, I deprived them of the chance I had been given: They were born in the D.C. area, so they wouldn't have the chance to have their lives be part of a neat little sports story. On the bright side, they'd never have the chance to be left hanging when the story ended, as I found myself.

Both of them were bigger Patriots fans anyway, long before Tom Brady even arrived on the scene, likely because I fancied myself such a Sox fan and, well, I was the oldest brother and the one to tease. I love the Patriots as well, particularly Drew Bledsoe, which made them pine for anyone but Drew from about 1997 on. When he got hurt against the Jets, one of them emailed me and said, "The Patriots will now win the Super Bowl." They did, of course, and now that brother lives in London, free from the pull not just of the region but of the entire culture. If he suffers from nostalgia, he doesn't show it in our gchats. 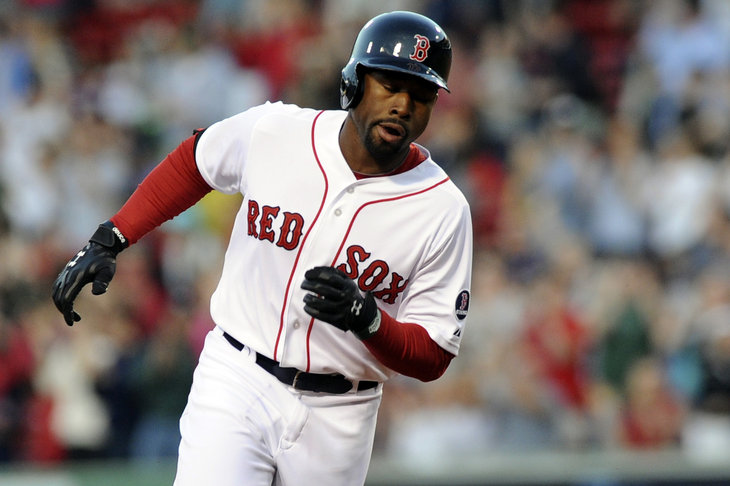 As you would expect, we have immortalized it in GIF form.

About four years ago, I found myself suffering from nostalgia. I had become something of a listless sports fan, the Red Sox reminding me of a past I felt I had outlived but one that the people around me had projected up on me as an identity. To them I was a Boston guy, a sports guy like Simmons. I needed to have an opinion on guys so I did, but I was faking it. There wasn't much joy, even during the rabid success of the period. I saw Boston fans as Drew Magary sees them: Arrogant and insatiable. That everyone gets this way in victory didn't soothe me because I felt completely divorced from my supposed brethren. I rarely crossed the Mason-Dixon line of the Connecticut border or the media market-dividing I-91. I was a man with a team that defined me but no longer defined the life I had made for myself at all.

Four years ago, I started to change that. I did some repairs on my mom's house, hoping to spend more time on the island. It was rocky at first, but it got me coming back to New England, which has been habit-forming, and my love of the Sox has been naturally reborn through the increased ease of following them on the internet and watching them on MLB.tv and a new connection to Red Sox terra firma. The glacial island soil is hard to tame, but it grows devotion to the Sox far faster than the heated Brooklyn sidewalks can strip it away. If you've read this far, you likely believe baseball is as much about the story as it is about the result, and Brooklyn, itself a pretentious but alluring idea, is about nothing so much as the story of itself, just like the Sox.

In the end, my story won't have a nice little ending, neatly wrapped up, the last paragraph mirroring the first. I'm writing this from Vineyard Haven, but I've become a tourist, the enemy of island life yet the sine qua non of keeping it moving, my tourist dollars hard at work. I still know the little things, like the back routes around local traffic and to visit in wide-open June instead of cramped July, but these are all parts of a much longer journey that didn't end when Keith Foulke retired Edgar Renteria. I don't know how it ends, but I'm taking it with the Red Sox from here on out. I used to expect a championship, and I got one. Then I grew up, and realized the next game is just as important as the final one. The glacier has receded, and every day is a flat plain, a new tableau.