It's back to an oldie for Law, who has swapped up his projected draft board once again.

Keith Law released the third version of his mock drafts for Thursday's MLB draft on Monday, and once again he changed who it is he expects the Red Sox to select. Unlike last week, though, when he predicted a new player in high school outfielder Austin Meadows, Law has reverted to what he had in his initial mock, and pegged Arkansas right-hander Ryne Stanek for the #7 spot.

Stanek was a "potential top-five pick" heading into this spring, but Law says inconsistency has dropped him away from the likes of Mark Appel. He does say, though, that part of the problem is what Arkansas has him doing: were he to cut out his slider, focus on his curve -- which is graded as both his best current and future offering -- and smooth out his mechanics a bit, his future could look a lot different than it does now. As is, Law says his ceiling is that of a #2 starter -- not bad by any means, but I'd understand if you felt like more should come of this pick. Maybe that's just because we're used to the Red Sox finding these types of guys in the supplemental round.

The thing is, Law doesn't even truly commit to Stanek, saying the Red Sox are "wide open" and could go with Meadows, Clint Frazier, Hunter Renfroe, D.J. Peterson, Alex Gonzalez, or Kohl Stewart, who they would be able to afford given their draft budget with this pick despite his football commitment to Texas A&M. 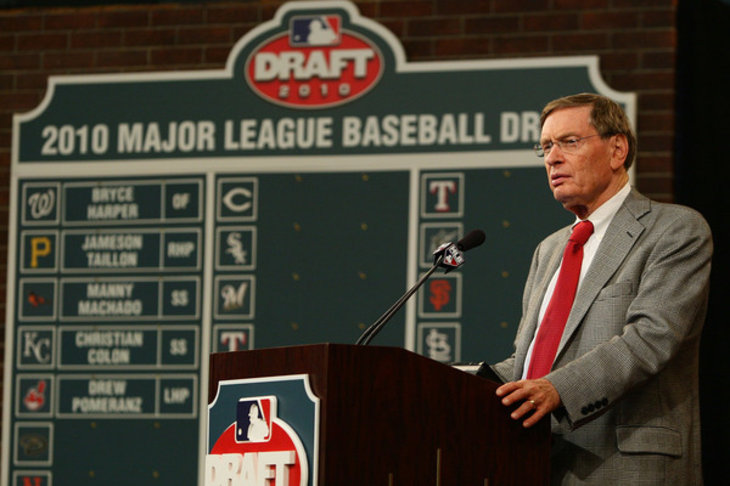 Yet another mock draft points to Clint Frazier as the #7 pick in 2013.

It's also intriguing that Law has Meadows over Frazier, when so many others have Frazier in their own mocks, even in recent ones. It's likely they're talking to different people within the front office, and that the Sox are still working out just who they have a preference for. That's what the rest of this week is for.

It's also worth noting that Law's draft is one of the more chaotic, given he has slotted Colin Moran in as the first-overall pick. If Moran doesn't go at #1, then situations change, as Kohl Stewart likely goes in the top four to someone who can afford his price tag, Mark Appel doesn't have to worry about falling anywhere in the draft for the same reason, and the Red Sox possibly end up with their choice among Frazier, Meadows, and maybe even Moran.