Yovani Gallardo can block a trade to any of ten teams, including the Boston Red Sox.

Per Chris Cotillo of SBNation's own MLB Daily Dish, the Red Sox are one of ten teams on Yovani Gallardo's no-trade list:

That's quite the list of teams, with little rhyme or reason to be found. The Astros in tandem with the Red Sox and Yankees? Why the rest of the AL East, but not the Rays? Why the Astros, but not the Marlins? Maybe he just likes Florida...

Generally speaking, players choose these teams based on who they think will want to trade for them, and generally speaking, it doesn't mean they're averse to going to those teams. But when it comes to moving to a division like the American League East, and a park like Fenway, it's entirely understandable why a guy like Yovani Gallardo (who has spent his entire career with the Brewers in the National League) would want some financial reassurances before risking his future free agency on such a move.

The question is, how much would the Red Sox want him? 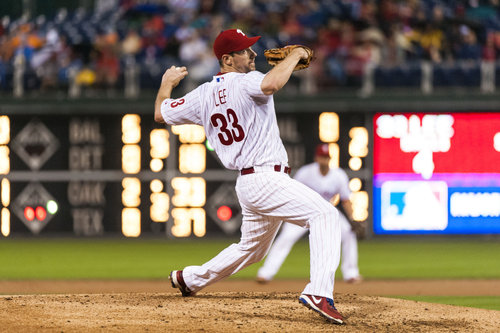 And then there are the more extreme options...

Gallardo has quietly been one of baseball's most consistent starters over the last four years, with an ERA never below 3.52, never above 3.84. He's given the Brewers at least 185 innings over 30+ starts in each of those seasons. Any team would be happy to have that arm on their staff.

This year, however, things have gone downhill a bit. His strikeouts are down, and that ERA is up over 4.00 for the time being thanks in large part to a mediocre May. If you put this season on a chart with his last two, you'd get a pretty ugly looking line.

But that's really just to say that his peripherals were only at their 2009 level last year, certainly within his typical range, and that 2013 has been a bit unkind to him through three months. A decent July, and he could well be back to normal by the time the deadline rolls around. Add to that the fact that he's only 27, and anything over basic wariness would seem unwarranted.

It helps that Gallardo's contract, if perhaps not lengthy enough for the Brewers to set him off-limits, is very team friendly indeed. He'll only be paid $11.25 million in 2014, and has a club option for 2015. And, thanks to how far back it extends, it would only be a $6 million hit when calculating the luxury tax, which is always important for the Red Sox.

The thing is that the no-trade clause means Gallardo can demand that change, be it with an extension, a guarantee to basically let him decide on the 2015 option, or the rights to Fenway Park. Boston has to appease him, not the other way around, and when you consider what the Brewers might want for their most consistent starter, well, it can start to add up.

Still, he's another option, and the more options, the more likely the Red Sox will find one at their price level, no-trade clause or not.