Vote Garin Cecchini (or else you hate the Red Sox)

Garin Cecchini stands to make the US Futures team, but Red Sox fans will have to vote for him to get him there.

Share All sharing options for: Vote Garin Cecchini (or else you hate the Red Sox)

Or, at least, it usually doesn't. Generally speaking when someone directs you to some massive general vote, be it as part of the democratic process your country hopefully has or for more important things like selecting an All-Star team, as but one voice in a sea of millions you have a minuscule, ultimately negligible impact on the outcome*.

Today, though, I'm here to tell you there might be somewhere you can make an actual difference: in the MLB Futures Game. 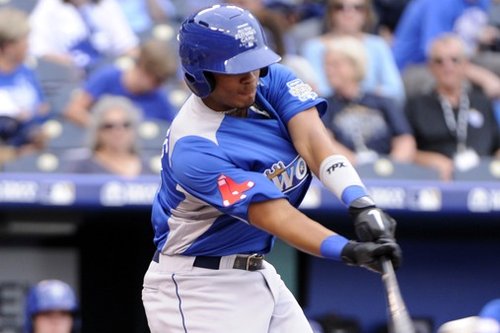 Summary or blurb about the related article

Every year, the futures game acts as a showcase for some of baseball's most talented prospects. This year, for instance Xander Bogaerts and Anthony Ranaudo are representing Boston. It's hard to get much better than that.

But wait, it can get better, because just like the MLB All-Star game, the Futures game has a fan voting component, with fans choosing the final players for both the US and World teams. And that's where Garin Cecchini comes in, representing one of five finalists for the US squad.

Once again, A FAN VOTING COMPONENT. This is the part where you click the link and vote for him.

What has he done to earn your vote? Well, first off, he's part of the Red Sox organization. Perhaps you've stumbled across us thanks to a search, but if you're here intentionally, there's a good chance you're a Red Sox fan, which makes this whole decision pretty easy.

But if you want some cold, hard numbers, try this on for size: before being promoted to Double-A Portland, Garin Cecchini hit .350/.469/.547. Pretty fantastic numbers, right? He did this in a league where only one other player had an OPS as high as .923. Only nine others even surpass .800. If this is a race, Garin Cecchini lapped the competition. Most of it multiple times. He was a man amongst boys, except that he was pretty much the same age as everyone else.

Garin Cecchini deserves to be in this Futures Game. Heck, he probably deserves it more than most of the guys already on the roster, Xander Bogaerts included if we're basing it just on 2013 performance. So let's get him on the team. This is not some super high-profile vote which has every baseball fan around the country filling out a hundred ballots (though it's remarkably easy to vote 10, 50, 100 times. I speak from experience), so every vote--or at least, every voter--might actually count.

*Please take part in the democratic process your country hopefully has.