Will Middlebrooks will reportedly get to play again every day, but not in the majors.

Share All sharing options for: Red Sox option Will Middlebrooks to Triple-A, call up Brandon Snyder

Update 4:06 pm: Will Middlebrooks has officially been sent down to Pawtucket, with Brandon Snyder added to the 40-man roster. To make room for Snyder on the 40, the Red Sox announced that catcher David Ross, on the 7-day disabled list with a concussion, was transferred to the 60-day DL.

Red Sox manager John Farrell has gone on the record saying that Boston is currently a better team with Jose Iglesias playing every day at third base, while also saying that the Opening Day third baseman, Will Middlebrooks, needs to play every day. It didn't take squinting to read between those lines, as it implied Iglesias would stick in Boston, while Middlebrooks was due to be optioned. Apparently, that could happen as soon as Tuesday.

Looks like Will middlebrooks may be heading down to Pawtucket. First baseman Snyder may be coming up.

Brandon Snyder isn't on the 40-man roster, meaning the Red Sox will have to place him there in order to bring him up. They are also out of 40-man spots, so someone is going to need to be designated for assignment or placed on the 60-day disabled list in order to open up a spot. As the only players on the DL at present are Clayton Mortensen (reportedly returning to the Sox on Wednesday), Clay Buchholz (working his way towards a rehab assignment), and David Ross (7-day concussion DL, getting checked again on July 4), the former option seems the most likely. 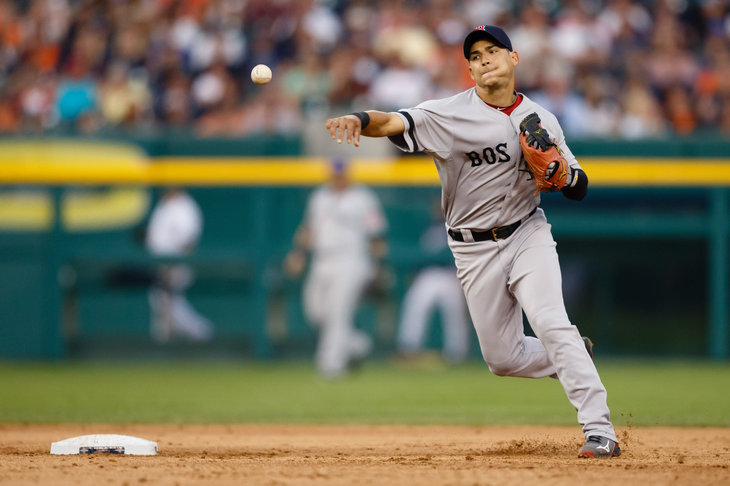 Will Middlebrooks will likely be heading to the minors very soon.

With Ross out indefinitely, it's hard to think minor-league catcher Dan Butler would be designated, as the Sox might have need of him in the majors if things go awry with Ryan Lavarnway. Daniel Bard could be designated, but there's a chance that someone could claim him given he still has options, so that all depends on how much faith the Sox have in him to rebound.

They might be able to get Bard on the 60-day DL, however -- he hasn't pitched with the Sea Dogs since May 15, and was placed on the minor-league DL on June 9 with an abdomen strain. It would require activating Bard from the minor-league DL, calling him up in place of Middlebrooks, then placing him on the big-league D to be transferred to the 60-day, and, finally, calling up Snyder in Bard's place on both the 40-man and in Boston. The drawback is that Bard's service time clock would run during this period of time he's on the 60-day DL, and he would be making a big-league salary. If the Sox are fine with all of that, though, this is an option for them to make room.

If Operation Bard is not in the cards, Steven Wright could be designated and might even sneak through given he's a knuckler who hasn't pitched particularly well in 2013, or the Sox could remove Pedro Beato -- recently added during the never-ending reliever call-up week of mid-June -- from the 40. Beato has been pretty solid for Pawtucket, though, and the Sox bullpen has dealt with quite a few injuries, so it's hard to know for sure.

As for Snyder, he's a career .277/.324/.418 hitter in the majors in 106 plate appearances. The 26-year-old is hitting .267/.338/.470 in his first successful stay at Triple-A, and while he's having a poor June, the goal here, more than anything, is to get Middlebrooks playing every day in the minors while leaving Iglesias undisturbed at third base. Calling up Snyder accomplishes that, and also gives the Sox someone else on the bench they know can handle big-league pitching.