Will Middlebrooks will likely be heading to the minors very soon.

Share All sharing options for: Farrell: Red Sox "better team" with Jose Iglesias at third base

Red Sox manager John Farrell spent time on MLB Network Radio on Tuesday afternoon, and the subject of Jose Iglesias vs. Will Middlebrooks at third base came up. When asked about why there was a lack of Middlebrooks' playing time at the hot corner of late, Farrell had plenty to say:

It's a combination of a few things, but none larger than what Iglesias is doing. They're both too very talented and young players, and at some point, the inactivity of Will [Middlebrooks] is going to come into play, because he's too good of a player, he's too young in is career to be sitting on the bench in an impartial role. But when you look at where we are today, and the way Iglesias has gotten on base, the way he's played defense, the way he's swung the bat... With who we are currently as a team, he makes us a better team right now.

Middlebrooks is still, presumably, the third baseman of the future -- he just has a lot he's going to need to work on in terms of pitch recognition and working the count in his favor. He was productive last year in the majors with the latter, and had seen improvements in his strike zone judgment up through the minors, but the league has him figured out at the moment, and it's his job to adjust to that adjustment. 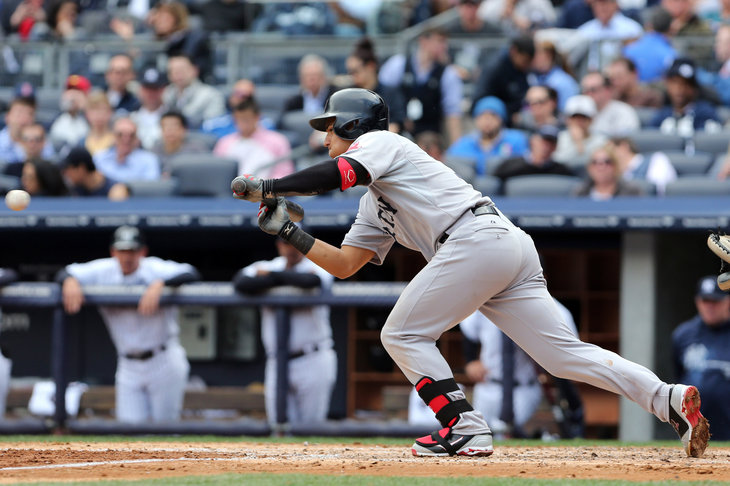 A hit by pitch extended Iglesias' impressive streak of reaching base.

He very well might have to make those adjustments in Triple-A, though, as Farrell was none too subtle about. "Still, Middlebrooks is your prototypical profile third baseman with the power ability, and at some point we have to get him to where he's playing every day."

Putting 2 and 2 together here isn't difficult: Iglesias makes the Red Sox a better team right now thanks to all he's doing on both sides of the ball, and Middlebrooks has hit just .192/.228/.389 and is now spending a lot of time on the bench -- this means that Iglesias will likely stay in the majors, and Middlebrooks is going to have to go to the minors where he can play every day and work on improving himself without it costing the Red Sox anything.

If the Sox are saying this publicly, you have to think optioning Middlebrooks is something they're going to do very soon.