It's that time of the year, when prospect analysts take a look at the first few months of the minor-league season, and figure out what needs reorganizing in their prospect rankings. The latest to do this is Jason Parks at Baseball Prospectus, who has released an updated top-50 as the mid-season follow-up to spring training's top-101.

Parks uses standard rookie rules for list eligibility, so simply having service time doesn't disqualify a prospect from consideration, as it does in lists like Keith Law's or Bullpen Banter's. If a prospect is currently on a big-league roster, though -- looking at you, Allen Webster, then he isn't eligible. Even with that, three Sox prospects made the top-50, the same number as back in February, but the third player -- and the ranks -- are different this time around.

Bogaerts mashed at Double-A and earned a promotion to Pawtucket and the International League at just 20 years old. Amazingly, though, Parks says that Bogaerts "hasn't even found his power stroke yet," with the implication being that he could be a .300 hitter with 30-homer power in the majors once he does -- if he does that, it won't matter if he can't stick at shortstop forever.

Parks writes that Bradley's disappointing start to the year in the majors hurt his stock ever so slightly, but, given how he has performed at Triple-A, it was likely tough to move him down and further than this. He's currently hitting .308/.410/.489 for Pawtucket in 33 games and 157 plate appearances -- once there is room in the Red Sox outfield, Bradley will be back once more, and likely better than each of the last two times. 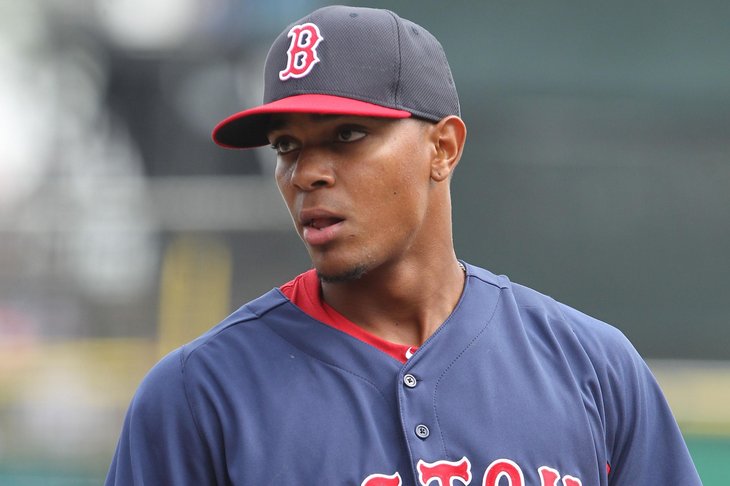 You know the first one, but a couple of the others might surprise you.

Cecchini is the new face of the bunch, replacing Matt Barnes in the top 50 prospects. He dominated High-A Salem and the Carolina League in much the same way the aforementioned Bradley did in 2012, and found himself promoted to Double-A Portland right after the all-star game, same as Bradley. This doesn't mean Cecchini is going to be making a stop in the majors in 2014, but if he handles Portland well, Pawtucket wouldn't be out of the question.

In addition to these three in the top-50, Parks mentions that left-handed starter Henry Owens and righty Matt Barnes both just missed the top-50, as Parks couldn't "fit ~75 prospects into a 50-prospect box." So, no, Barnes 2013 struggles have hurt his stock slightly, but not enough to knock him out of top-50 contention. Owens wasn't on BP's pre-season top 101 at all, so just missing the top-50 is a huge boost for his stock, nearly on par with Cecchini's leap.

This is, of course, without even getting into Blake Swihart's rise, the drafting and signing of Trey Ball, Anthony Ranaudo's resurgence, or where Allen Webster, who has mostly pitched well at Triple-A, would rank. The Sox farm is looking pretty good these days.