While his bat has been a pleasant surprise, there was never any doubt about Jose Iglesias' fielding ability. Now the major question is how to get that wonderful glove on the field.

Jose Iglesias is a special player. His glove has been described as elite since he was a twenty-year-old in the low minors and not one bit of that hype has faded in these early days of his major league career. He may well be the top defensive shortstop in the game right now, but his arrival in has been delayed by anemic results at the plate over the past three seasons. After a brief but successful stint with the big league team to start the year, Iglesias returned to Pawtucket and resumed struggling.

Depsite his struggles, another opportunity would shortly present itself. With regular third baseman Will Middlebrooks landing on the DL, Iglesias was given a quick tutorial at third base and returned to the club to fill the role in Middlebrooks' absence. As it turns out, he is fantastic there as well. The newfound versatility brought him back to the majors and he has once again begun to thrive.

Read More: Jose Iglesias can play a great third base too

Then, when Will Middlebrooks returned earlier this week, the Red Sox had to decide again whether to keep Iglesias, his excellent glove, and his flawed-but-productive bat in the big leagues, or to give him even more time in the minors to get as many at bats as possible while the Sox lived with the flawed glove and equally flawed bat of Pedro Ciriaco in the utility role. With Iglesias sporting a batting line of .449/.494/.577 over 87 plate appearances this season, this time the decision didn't simply come down to choosing between his glove or his bat's development. Ciriaco was sent down (and now away to the Padres) with Iglesias inheriting his bench role. The only issue now is that with Stephen Drew around and Middlebrooks back, finding playing time for their exciting young shortstop has become a challenge.

Earlier in the week, Matt Collins looked at how to get Iglesias some more at-bats. He made the case that Iglesias should play against lefty starters since Stephen Drew has never been particularly good against them. Matt also found opportunities for Iglesias to play some third, and even get a little time at second. It is a sound strategy and I would not be surprised to see the Red Sox do something very close to what he suggests. However, I wonder if the real way to optimize Jose Iglesias’ value this season wouldn't be to focus on the situations where his glove would be the most valuable?

After all, Iglesias is first and foremost an incredible defender. According to both UZR and , he was on pace to save more than 40 runs last season had he played everyday. Yes, defensive statistics are slow to stabilize, but it is much easier to trust in Iglesias's ability to add three or four wins with his glove than it is to believe that he will be Rogers Hornsby at the plate for any truly significant period of time. Rather than looking for places where his bat can be most effective, maybe we should be looking to maximize his value on the field and just take the at-bats that come with that playing time.

Looking at the Red Sox pitching staff, it is clear that there are some times where Iglesias can have a bigger impact than others. The Red Sox staff is one of the more groundball-prone groups in the game. In the American League, only the Tigers have gotten a higher percentage of grounders this season. The distribution of those ground balls is not spread out evenly across the entire staff, though. Four of the team’s five starters have above average ground ball rates right now. John Lackey is the most extreme, with a rate of 52.6 percent. Ryan Dempster is the least worm-burning of the group, with a rate of 43.3 percent.

Determining which starters should get Iglesias playing behind them is a bit more difficult than simply ranking players by this season's ground ball percentage, however. Lackey has gotten a higher percentage of groundballs this season than other time in his career. How much of that change comes from random variation and how much comes from a different approach to hitters is an important distinction to make if we are trying to optimize how we use Jose Iglesias. 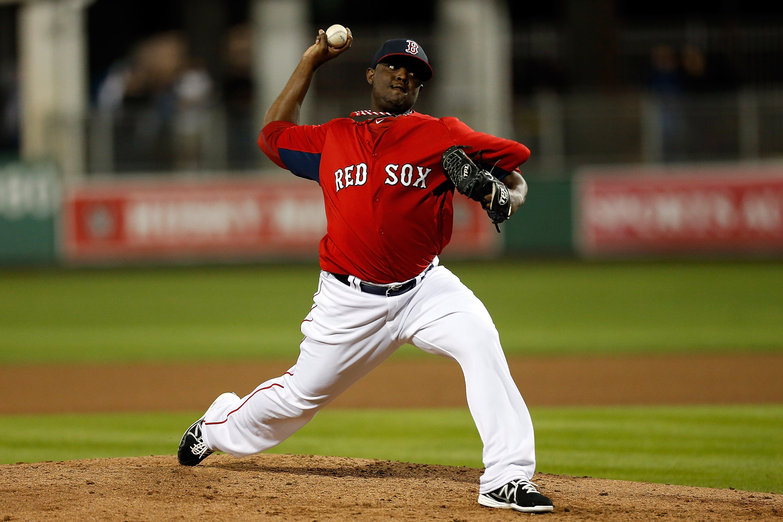 One pitcher who would almost certainly maximize the benefits of Jose Iglesias’ glove is Jon Lester. Lester has been a consistent ground ball machine in his career and his rate is at exactly 50 percent this season. He is also left-handed, meaning managers are likely to choose more heavily right-handed lineups against him and righties tend to hit grounders toward short and third.

So far this season, Felix Doubront has been very close to Lester in terms of groundball rate and as a southpaw, he also sees more righty hitters, making him a strong candidate to match with Jose. His career numbers have never favored ground balls to this degree, though and he may regress to less-than-average rates at some point.

Clay Buchholz has had very strong groundball rates in his career, but those numbers have been trending downward. The spot starting options for to this point have all been at the lower end of the ground ball spectrum, too.

If the Red Sox were to try to maximize Iglesias’ contributions on defense, pairing him with Jon Lester should be a given. Beyond that, the evaluation is trickier, but I tend to believe Lackey would be the next most logical pairing. His success this season is probably connected to the increase in ground balls and keeping that going should be a priority.

There are also opportunities late in games where Iglesias could provide some advantage. Here, however, the team’s pitching tendencies significantly complicate the issue. In late-and-close situations, Iglesias’s superior glove could be the difference between a win and a loss, but the three top relievers on the club--Andrew Bailey, Junichi Tazawa and Koji Uehara--are at the very bottom of the team’s ground ball rate leader board. Simply subbing in Iglesias whenever the team has high-leverage situations in the late innings may not add much extra value as a result.

Instead, Iglesias would be best employed on days when one or more of those key relievers are unavailable and groundball-heavy lefties like Craig Breslow and Andrew Miller are pressed into more extended work. Breslow actually might be the Red Sox pitcher who would benefit most from Iglesias’ help, since he pitches to greater contact rates than most of the Sox staff. It is hardly practical to just drop Iglesias in at short or third whenever they call on Breslow, but when it does make sense in the context of the game, it would put the Red Sox in the best position to take advantage of the unique resource that is Jose Iglesias’ fielding ability.

Obviously, the best approach to truly get the most out of Iglesias as a part-time player will be to give weight to his contributions on both sides of the ball. There will be times when Jon Lester is on the mound facing another lefty, which is a perfect opportunity to take advantage of his skills. Other times, a trade off somewhere is inevitable. With his new found ability to play third and signs of improvement at the plate, Iglesias deserves a larger role than the average bench player. Considering what he offers on defense at both short and third, maximizing his time in the field is as much a consideration as the platoon advantage at the plate.