Barnes hasn't been outright bad -- he's just been inconsistent. After a rough April, he was what you want from him in May, with a 2.65 ERA over six starts, averaging 5-2/3 per. He punched out 37 batters against just nine free passes in that stretch, and looked like he had put May behind him. June has not been nearly as kind, however, with Barnes giving up seven runs in 1-2/3 frames in his first appearance of the month. While his next start was at least a step in the right direction -- eight strikeouts, one walk -- he only lasted four innings and allowed four runs.

Some up-and-down moments are expected, and when he's been good, he's been great. There's still a lot of work to be done here, though, work that will require him to better feature his secondary stuff in order to give him something besides that plus fastball to lean on. He has the talent, and he has the time to let things work themselves out. NOw we just need to be patient. 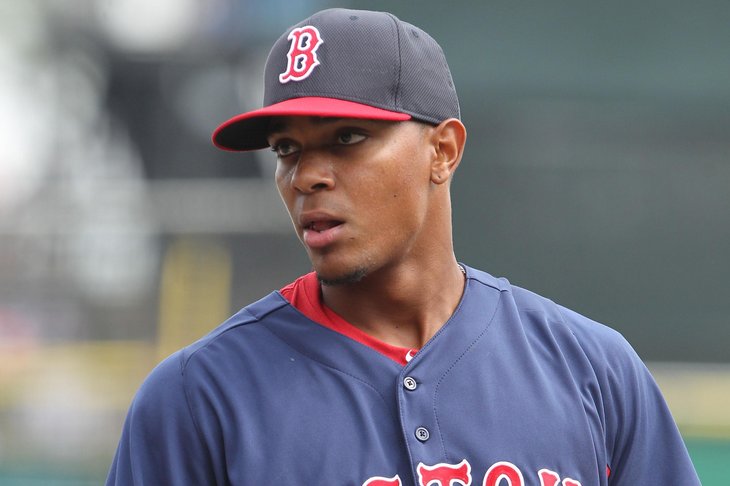 Bogaerts has learned all he can from Double-A, and will take his development to Pawtucket.

Speaking of patience, Drake Britton: Starting Pitcher is an experiment that refuses to die, but has been coming along nicely of late. Britton recently received Pitcher of the Week honors after nearly throwing a no-hitter that he last in the eight inning, a game in which he struck out eight against one walk while inducing three times as many ground outs as air ones. That game isn't the only one in which he appears to have turned a corner, as he followed that up by scattering six hits over seven innings with three punch outs and one free pass. Over his last 25 innings and four starts, Britton has struck out 23 batters and walked seven, all while allowing just one earned run.

It has seemingly taken him forever to get to this point, but he's here now, and the question is what to do with him next. Brandon Workman's promotion took away an open rotation spot at Triple-A Pawtucket, but Terry Doyle could likely be pushed to relief if the Red Sox decided Britton was just wasting time by staying in the Eastern League. The problem with that, of course, is that Doyle is only in the rotation at the moment because Alfredo Aceves is with the Red Sox -- there are a lot of moving depth parts here.

Regardless of where he pitches the rest of this season, Britton will be down to his final option year in 2014, so figuring out whether or not he can pitch in Triple-A and then the majors is something that needs to happen relatively soon.

Celestino is new to this year's updates, as this spot was previously Brandon Workman's. He's been in relief for the Sea Dogs all year after spending his 2012 as a starter with High-A, and the transition hasn't quite worked as hoped. He's walking too many batters, but more problematic is the long ball, with seven batters going yard against him in 35 innings of work.

He's been a bit better lately, throwing 7-2/3 innings of relief since May 28 with 11 strikeouts against a pair of walks, with just the one homer allowed. He'll need to work on keeping the ball down in the zone for that to continue -- while he's had more ground outs than air outs this year, he still isn't staying down consistently enough, as you can glean from that ugly homer rate.

The scouts and prospect analysts who like Celestino really like him, but there's a ton of work left to be done here, and he's already 23. If he's started to turn things around in the past couple of weeks, that will help him get back on schedule, but more struggles like in the season's first two months will be hard to take.