Bogaerts has learned all he can from Double-A, and will take his development to Pawtucket.

You knew it was only a matter of time for a Xander Bogaerts' promotion to Triple-A Pawtucket. Jose Iglesias is seemingly in the majors to stay thanks to his fantastic start to 2013, and that left a Bogaerts-shaped opening at shortstop in Pawtucket. The fact Boston's top prospect is hitting .424/.548/.636 in 10 June games probably helps as well, especially after a May in which he erupted for five homers, 14 extra-base hits, and 16 walks in 26 games.

Said time is now, as Bogaerts will reportedly play for the PawSox on Thursday night -- assuming the weather allows the promotion, anyway. The story initially appeared at the PawSox website, but was pulled, likely because it's an unknown until the weather situation is figured out. WEEI's Alex Speier is the one reporting that it's weather permitting, though, so you can assume that if it's not today, it'll happen Friday.

Xander Bogaerts in the running to be baseball's best prospect 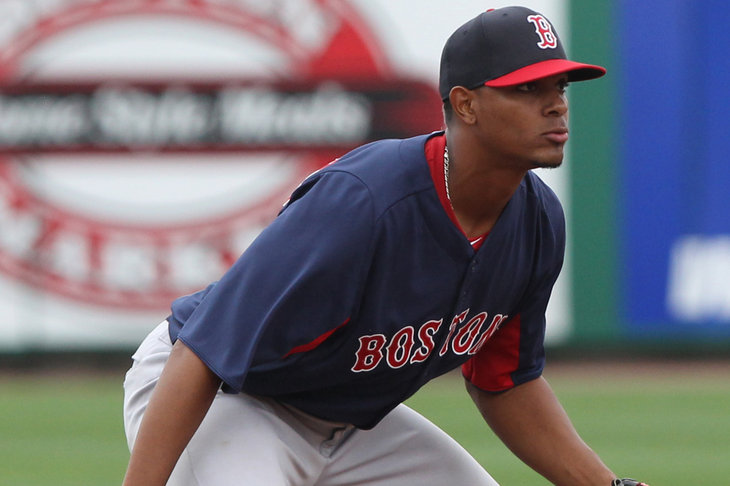 Xander Bogaerts, who tops Baseball America's hot sheet for the week, is in he running to be the best prospect in baseball.

If it's indeed the end of his time at Double-A, Bogaerts finishes with 79 games at the level and a line of .315/.392/.531 over 356 plate appearances spread across two partial seasons. He was the youngest player in the Eastern League in 2012 after his promotion there, and that title stuck in 2013 as well. He's now the youngest player in the International League, as the previous holder of that title was White Sox shortstop prospect Carlos Sanchez, who is four months older than Bogaerts.

Scouts believe Bogaerts can stick at shortstop, at least at the start of his major-league career, and that becomes even more likely with a mid-season push to Triple-A that now has him penciled in for a 2014 big-league debut. It might take some time for him to adjust to the most advanced pitching he's ever seen, but if his previous work is any indication, the wait for him to acclimate will be well worth it.