He took his sweet time getting to it, but it ended up being the difference for the Red Sox.

Daniel Nava is a patient hitter. It's why his on-base percentage sits at an AL-outfielder-leading .392, why he sees 4.2 pitches per plate appearance, and why he's a valuable piece at the top of the Red Sox lineup. It's also why, after nine pitches, he finally saw an offering in his wheelhouse against Rays' starter Chris Archer:

The plate appearance began with three-straight balls outside, but then Archer threw a strike on the 3-0 pitch. From there, Nava fouled off five consecutive pitches that were a little up, a little low, a little away. That 10th pitch, though, caught just a little too much of the inner part of the plate, right where Nava could drill it. That ball got out of Tropicana in a hurry, and right into the hands of a Red Sox who just happened to be sitting there.

It was the best pitch Nava would see for a hitter, and the worst one Archer would throw in the at-bat -- sure, balls are not something you want to throw, but at least there was little chance of Nava doing, well, what he did to the errant strike to any of those. 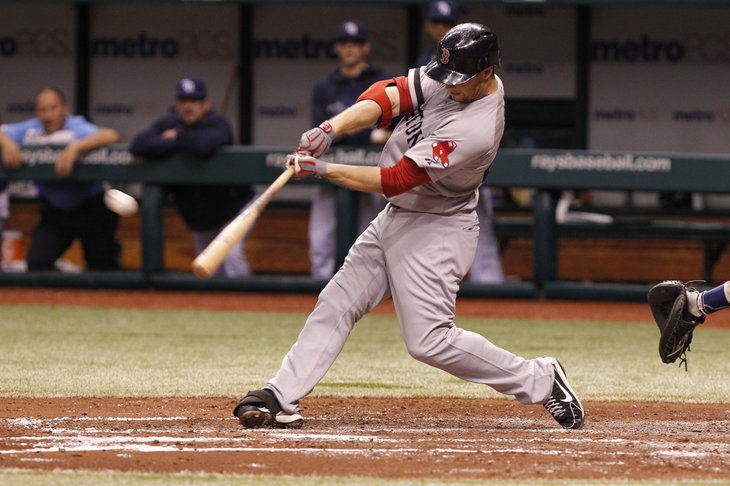 Should is not the same thing as will, but does that matter?

The virtues of patience manifest themselves in more ways than just walks. Nava pushed a starter who has spent most of the years in the minors, and had not crossed the 95-pitch mark yet this season according to fill-in color announcer Rob Bradford, from 51 to 61 pitches in a single at-bat, and it was just the third inning -- Archer would leave after four frames and 103 pitches, in large part due to the 23 pitches that Nava saw by himself in those four innings.

Even if he hadn't notched a homer in the third, there would have been value in that plate appearance. He did, though, piling on to an already productive trip to the plate, and reminding us once again why his presence in the lineup is so vital to this Red Sox offense.