"The Red Sox really think he is fouled up mechanically," Olney said. "It was interesting when we had a conversation with John Farrell before we did the Sunday night game about 10 days ago. He was fairly circumspect when he was talking about [Clay] Buchholz and he was talking about Lester and he made sort of these references to Lester's mechanics, and his concern is that he tries to draw his arm back a little bit farther and get a little bit extra and that is when he begins to lose it.

It's not surprising to hear the Red Sox talk about Lester having mechanical issues. Last night's first inning saw the southpaw offerup four walks in the first inning, and he's not exactly been in control in recent weeks besides. That doesn't happen out of nowhere.

It is interesting to see what Farrell has singled out as his problem and, frankly, it's a little hard to understand why that would come up as early as the first inning like it did last night. For a guy like Lester, who sort of slings his signature cutter into the zone, you might expect that the problem would instead be found in something like release point but, well, this is his release point chart for last night, via the amazing Brooks Baseball: 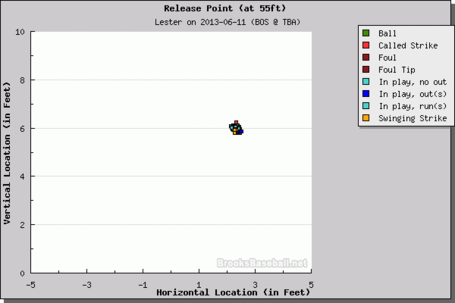 And just in case you thought that tightly clustered bunch might just be in entirely wrong place--certainly a possibility--this is what it looked like back on May 10th, when he shut the Blue Jays down for the full nine innings: 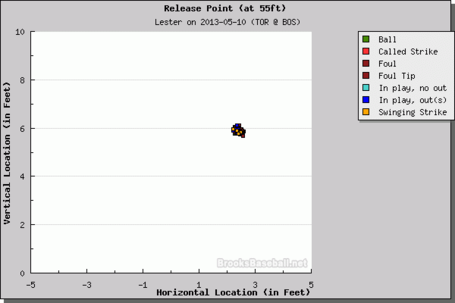 Frankly, I think whatever Lester's problem are, they require more time and words to explain than what Farrell has said. That seems like a situational thing, rather than a problem that can sink a full month's worth of starts. Hopefully whatever they may be, Farrell, Nieves, and whoever else might get involved can get to the bottom of it. Because right now they can't sit idly by and watch Lester burn, lest he take too much of the team's success with him.