Trouble ahead: Felix Doubront’s struggles up in the count

Some of the biggest problems for Felix Doubront this season have come when he gets ahead of hitters. We take a look at why.

Share All sharing options for: Trouble ahead: Felix Doubront’s struggles up in the count

Felix Doubront has always been intriguing. He is left-handed. His fastball has averaged almost 93 mph prior to this season and he has averaged more than a strikeout per inning in his young career. Those are all things that lead us to believe that Doubront could be substantially better than career 4.86 ERA. His peripheral stats are promising; he owns a 4.22 career FIP which is just under league average and he has an even better xFIP at 3.87. Given his age and his relative inexperience, the optimistic fan can certainly dream on what he may become when these early growing pains--if, indeed, that's what they are--end and his results begin to match up with the promise of his stuff.

Right now, though, Doubront is often a frustrating player to watch. With 61 innings under his belt this season, his results are still far worse than metrics like FIP and xFIP suggest they should be. He has a 4.84 ERA, 13 percent worse than league average by ERA-. Many of his issues are pretty easily recognizable: he has trouble maintaining control, gives up a lot of home runs, and is extremely inefficient, pitching into the seventh just twice despite averaging over 100 pitches per game. One issue that is slightly less noticeable but no less frustrating is his tendency to struggle when he is ahead of hitters.

On his career, Doubront has allowed a batting line of .275/.286/.363 to opposing batters after starting an at bat 0-1, and a .209/.211/.336 line when he goes up 0-2. That isn't great when you consider that league average this season is .229/.268/.350 after a 0-1 count and .174/.201/.262 after 0-2, but it is nothing compared to his struggles this season. In 2013, Doubront is allowing opposing batters to hit .278/.311/.397 following 0-1 counts and .245/.268/.415 after 0-2 counts. He is particularly disappointing on his 0-2 offerings, allowing eight hits including three doubles and a home run in the 25 plate appearances where he has reached that count. Now, that is a small sample and there is absolutely no reason to believe he will continue to let hitters have an OPS over .900 on that one pitch, but it does highlight just how bad things have gotten for Doubront in the count that favors him the most. Even though random variations might be responsible for the extreme numbers, the problem is persistent enough over his career to warrant closer examination.

This particular issue is extremely counter-intuitive given the young lefty's strong strikeout rates. Using K/9 does exaggerate Doubornt's ability to punch out opposing hitters because his high walk rates mean that he faces more batters than a more efficient pitcher, but even looking at strikeouts by percentage he is firmly above average with a 22.6 percent K-rate. The problem is obviously not that Doubront can't finish hitters off.

There have been a few notable issues plaguing Doubront this season. His fastball velocity is down from an average of 92.8 mph last season to 90.1 this year. His swinging strike rate is down as well. Both of these issues could contribute to his difficulties when ahead in the count, but with his strikeout rate still very much in line with his established norm, neither is a prime suspect.

Looking at his pitch selection with the help of the fine folks at Texas Leaguers offers some possible clues to this peculiar problem: 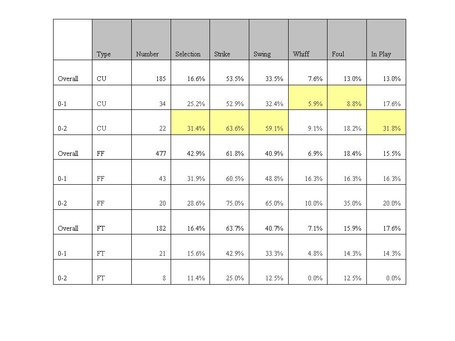 This table shows his three most frequently thrown pitches this season across the two counts in question. I have highlighted several frames in the table but even without my help, those numbers should jump out at you.

The dramatic increase in the number of curveballs thrown as he gets ahead of hitters is not a surprise. Doubront clearly sees the curve as his out pitch, and it has solid enough whiff rates overall to justify that notion. His cutter actually gets more whiffs than any other pitch overall and predictably it also gets used more in these situations, but the issue is clearly related to his curve.

When he is well-ahead in the count, his curveball is failing him in several ways. At 0-1, the pitch is generating basically the same number of swings it typically does, but it is producing far fewer whiffs and foul balls. At 0-2 it appears likely that hitters are simply sitting on that pitch right now. They are swinging at it twice as often as they do otherwise and putting it in play almost twice as much as well. They are also fouling it off slightly more, extending the plate appearance. It has still gotten whiffs, but the extreme bump in contact is a problem.

Part of the reason the curve is failing him in these counts is because of how locates the pitch, or perhaps, how he doesn't locate it.

This is not exactly the ideal arrangement of pitches for a wipe-out curve coming up in the count. With three chances to get just one more strike, Doubront is not dropping many of these pitches below the zone or even consistently getting them low. If this was a get-me-over type of pitch like the curve Clay Buchholz often uses to get an early strike this grouping would be pretty effective. However, with hitters swinging at the pitch far more often than they normally do, putting so many curves up and in the middle of the zone is going to result in any pitcher getting hurt.

There is random variation in things like pitch location and swing rates just as there is in the results, so some of this effect is probably going to go away as the numbers go up. However, there is a practical change that Felix Doubront could make that would also help: he can move to throwing fewer curves in these counts. The pitch may not be the out pitch he wants it to be but I wouldn't necessarily go that far based on just what is happening right now. What does seem clear is that the pitch is not surprising anyone when he is ahead and that is easy to fix. Mixing in more cutters could help and it also seems like he can gain a temporary advantage by using fastballs more in these counts as hitters sit on the curve.