Cecchini "slumps" while Coyle misses time, and Augliera is figuring out his command.

Garin Cecchini has been slowing down lately. Of course, in Cecchini's current universe where he is a god and the rest of the Carolina League are mere mortals whose existence is meant to reinforce that fact, "slowing down" means he's hitting .333/.459/.367 over the past 10 days for an 826 OPS that would still rank seventh in the league were it his season's rate. Despite this... disappointing? ... stretch, Cecchini remains the only player in the Carolina League with an OPS over not just 1000, but also over 900. 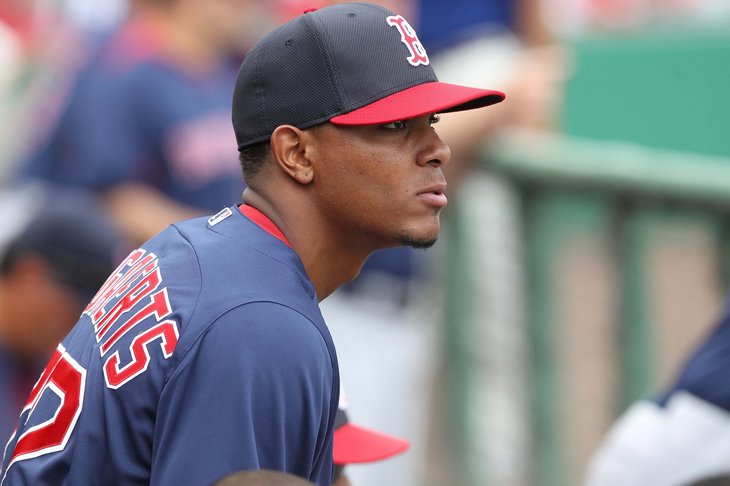 One you likely can guess, but the other is a surprise entrant.

More seriously, let's not crown Cecchini king just yet. He's raking at High-A, and much of the reason for his recent line likely has to do with pitchers acknowledging he is dangerous and is to be pitched around, but it's still just High-A. Moving up to Double-A where more experienced pitchers reside would be the next step, and with 59 games under his belt with Salem, that's likely something that will happen soon. Cecchini's season is mirroring Jackie Bradley Jr.'s own dominance of the Carolina League in 2012 in a lot of ways, and it will likely continue to do so through the All-Star game at the level: once Cecchini has experienced the honors of representing Salem and his season there, a ticket to Portland likely awaits, just like it did for JBJ.

What the Red Sox plan to do with current Sea Dogs third baseman Michael Almanzar at that point is something that still needs to be figured out, but if they're thinking his season merits the jump to Pawtucket -- where Boston has no third base prospect at present -- then that's one way to make it happen.

Coyle slowed down in May after a tremendous April in which he slugged .730, but he started to come back around before the calendar turned over: Coyle ended May hitting .308/.378/.436 over his last 10 games of the month. He hasn't played since May 29, though, as he's dealing with an "unknown knee injury" according to Sox Prospects. It hasn't landed him on the disabled list, but it's been enough to keep him out of the lineup, stalling his return to form.

His line isn't perfect by any means, but it's a huge step up from last year's effort, when he hit all of .249/.316/.391 as a 20-year-old. Repeating the level is a normal thing at his age, and it's good to see that he's taking steps forward, even if he still has further steps to take. Cutting down on the strikeouts is the next step, but at least he's making great contact when he hits the ball.

The strikeouts still aren't there for Augliera, but that's okay. He's spending his time as a starter at High-A figuring out something much more important and vital, and that's his command. He's had fantastic control for years now -- he led the NCAA in K/BB last season before the Red Sox drafted him -- but command is a different beast, as it's quality strikes instead of just strikes. He was hit hard when he first came to the pros last year before figuring out that difference a bit, and has taken that to the next level in the first couple of months of 2013.

Keeping track of Boston's selections and signings in the 2013 MLB draft.

Augliera has nearly twice as many grounds outs as air outs, suggesting he's doing a good job of keeping the ball down in the zone, and letting the hitter get themselves out. He's still giving up plenty of hits, a fact that's likely partially on him for pitching to contact but also on the defenses behind him for being, well, High-A quality. That can be rectified with better fielders, and hopefully, with a few more punch outs from Augliera down the line, too.

He won't be a big-league starter, but there's a useful reliever who can avoid handing out walks and keep the ball on the ground somewhere in here. That's not huge, but it's no small thing, either, especially not from a fifth-round pick signed well below the slot recommendation. Remember that this year when Boston starts to ink more college seniors to similar deals -- there might be something there besides just savings.