Boston hasn't made a decision yet, but one will obviously have to come soon.

Red Sox manager John Farrell was on MLB Network Radio on Wednesday, and shared that Boston hasn't picked who will make Wednesday's start in the series finale against the Rays. He did, however, give three options -- yes, one of them is Alfredo Aceves. The other two are right-handed pitching prospect Allen Webster, and Rubby De La Rosa, who is not a prospect any longer, but is just 24 years old and working back from 2011's Tommy John surgery.

Webster hasn't pitched since June 6, so making a start on Wednesday, June 12, would fit in with his schedule fine enough. Aceves was slated to pitch Tuesday for Pawtucket, but was removed just in case he ends up being the option they go with against the Rays. Last, there's De La Rosa, who threw a season-high five innings on June 8 for Pawtucket -- as the Red Sox have been slowly building him back up towards a full workload, it would be a bit odd to go to him on three days rest, unless Boston plans to split the difference and have both De La Rosa and the original starter (well, original fill-in starter) Franklin Morales put on a tandem starter show for one night only. 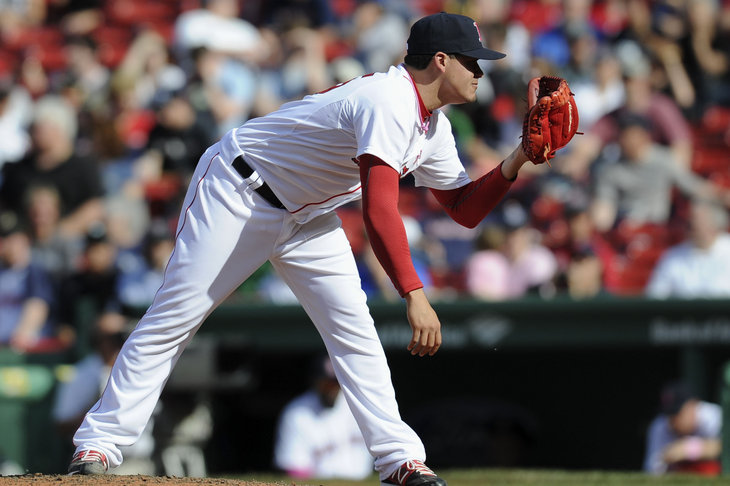 Boston's bullpen is in need of help, and reportedly, they're getting it.

Barring that, the Sox are likely left with Webster or Aceves. Webster was solid in his major-league debut against the Royals, but was destroyed by the Twins and failed to escape the second inning thanks to command issues and overuse of his much straighter four-seam fastball, rather than his sinking, high-velocity two-seamer. Aceves pitched himself into a demotion in April, posting an 8.66 ERA while splitting time in the bullpen and as a replacement starter for John Lackey. He made two emergency appearances since then, though, with one in the bullpen and the other a start, and strung together seven innings of one-run ball.

There probably isn't a wrong answer here, hence the lack of one for the Red Sox to this point. Aceves has (mostly) pitched well enough for the PawSox, and succeeded in his last spot start. Webster is the better pitcher with the higher ceiling, but he would have to face the toughest lineup he's seen in his brief major-league career, and while he's pitched well for Pawtucket, he hasn't been lights out to the point where he's the obvious choice. If Boston doesn't care to interfere with his development any, and would rather he focus on getting himself to where he needs to be against minor-league hitters, then Webster will likely skip this turn, with the spot start going to Aceves.

We'll see soon enough, as the game is Wednesday, and Boston already has a pitcher in Jose De La Torre -- or will, once that move is official -- that they will demote in favor of whichever starter they bring up. That means we might even know as soon as Tuesday night.