Boston's bullpen is in need of help, and reportedly, they're getting it.

There's no official word, nor is there a corresponding move, but the word out there is that it'll be Jose De La Torre joining the Red Sox bullpen in order to give the regulars a breather. Said word comes from former Red Sox infielder and current ESPN analyst, Alex Cora:

José De La Torre on his way to Tampa #RedSox

WEEI's Rob Bradford also cites a source, but there's no corresponding move from him, either.

De La Torre has been up once already, and threw two innings in two games, striking out a pair and walking one. He's spent the rest of the season at Triple-A Pawtucket, where he has a 2.17 ERA and just under 10 strikeouts per nine innings. While he doesn't have swing-and-miss stuff, he can locate within the zone very well, and keeps the ball on the ground consistently, too. He's also averaging over 1-2/3 innings per appearance, so if the Sox need some length from him in an outing tonight, he's capable of giving that to them.

Why the need for De La Torre? Boston's bullpen threw three innings on Sunday, with Koji Uehara tossing 31 pitches in his appearance. He then threw two innings on Monday thanks to extras in Tampa Bay, in a game where the Boston pen threw 8-1/3 frames and used seven different pitchers, including Wednesday's scheduled starter, Franklin Morales. Just who is starting in his place on Wednesday is an open question, but it will likely be De La Torre who is sent back to Pawtucket to make room for whoever that starter is.

End of the road for Clayton Mortensen 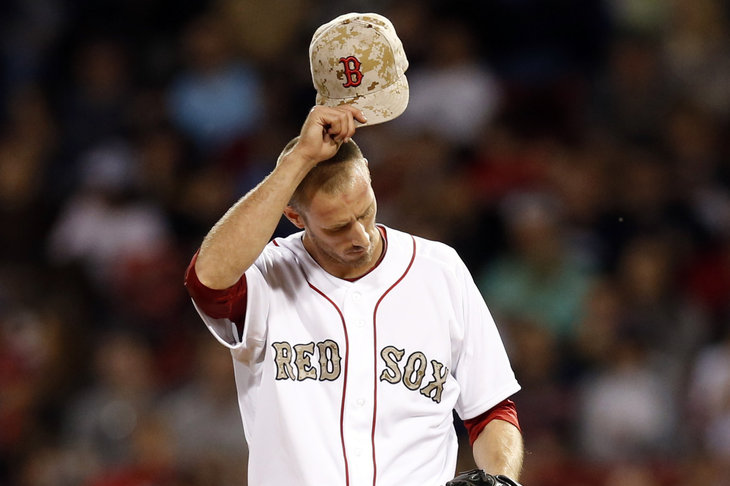 After struggling this season, it's time to move on from Clayton Mortensen.

As for who is coming off of the roster for De La Torre, there is no easy move to make. There are no pitchers with options remaining in the Red Sox bullpen, as Daniel Bard, Alex Wilson, and Alfredo Aceves are already in the minors, and Pedro Ciriaco, although not a reliever, was designated for assignment on Monday in order to activate Will Middlebrooks from the disabled list.

Was Monday's scoreless inning Clayton Mortensen's last in Boston? Or will the Red Sox temporarily shuffle Jose Iglesias off to Pawtucket, just to clear up this bullpen situation temporarily? That would mean Iglesias has to spend 10 days in the minors, but in case of an infield emergency, they could call up Brock Holt, already on the 40-man, from Pawtucket during that stretch. They could always put Clay Buchholz on the disabled list, but he wouldn't be able to come back for nearly two weeks, and that's a long time to be missing him if all his neck needs is a few days to recover.

We'll know soon enough, but those seem to be the three options: designated Mortensen and hope he clears waivers, DL Buchholz and hope you don't miss him while he's gone, or temporarily demote Iglesias and hope you don't need another infielder on Tuesday.