The Red Sox have a lot of depth in the minor leagues, but not where they might need it most after last night's game.

The Red Sox have some interesting depth this year. In the outfield there's Jackie Bradley Jr. and Bryce Brentz in the minors, and Jonny Gomes in the majos. Jose Iglesias waits for the call at shortstop. Mike Carp can play either the outfield or first base, and has made himself an interesting enough option that Sox fans wouldn't be upset to have him there.

But at third base? Behind the plate? There the options are less obvious. And, after David Ross and Will Middlebrooks collided in Tuesday night's loss to the Twins, that might be no small problem. The good news is that, at least for now, both have avoided the disabled list. Until they're both on the field, again, however, that lack of depth is going to be a nagging concern.

So what if the worst comes to pass, and one or both of them miss time? What are the Red Sox' internal options? 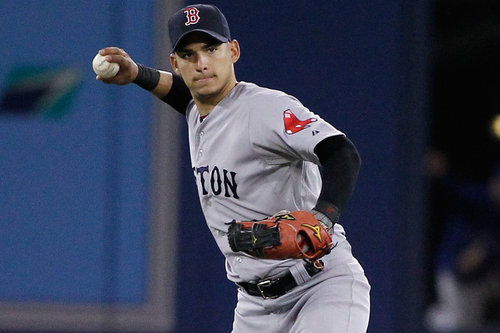 Is Jose Iglesias being given a few mental days off, or has he been shut down for disciplinary reasons?

At third base, the answer is actually fairly easy...if Jose Iglesias is available. The shortstop could easily fill in for Stephen Drew, who could then shift over to third, which frankly wouldn't seem so bad given the way he's started hitting of late. The problem is that Iglesias hasn't played for a few days now, and it's not clear if he's available or not. While typically this sort of thing would be the result of injury, it seems that Iglesias' absence is by the team's choice, and the possibility exists that the young shortstop is in manager Gary DiSarcina's dog house. If he's injured, obviously, that makes a promotion a no-go, but it's also not clear whether the Sox would be willing to undermine DiSarcina and cut any discipline short for the good of the team.

Beyond Iglesias, unfortunately, the pitckings are slim. Brock Holt is off to a very slow start in Pawtucket, and Drew Sutton is both injured, and Drew Sutton. Either one of those should be enough to disqualify him from consideration. Really, it's Iglesias or bust.

At catcher, the first thought on everyone's mind will be Ryan Lavarnway. And, for a short-term replacement, he might just have to get the nod. The problem is that Lavarnway can't play the position. Even last year, playing with Jarrod Saltalamacchia's questionable glove as the most readily available reference point, Lavarnway looked like a complete hack behind the plate. Some have speculated that his performance may have been fatigue-related, and his minor league numbers have been good so far this year, perhaps signaling a return to form, at least offensively. Still, given how impressive the beginning of the season has been for much of Boston's rotation, it seems a bad idea to risk messing up the battery by swapping out Ross' defensive excellence for Lavarnway's poor glove.

Another option that is probably best left unexplored is Christian Vazquez. The young backstop has a .400 OBP down in Portland, and earned attention in spring training by gunning down runners with gusto. The concern here is developmental. Catchers generally take longer than other players to come up through the farm system, and giving him such an early bump to the majors seems more likely to take him out of his rhythm than anything else. Even though he's already on the 40-man, it seems an unlikely move for the Sox to make.

That would leave Dan Butler, who frankly would seem like the most likely option. He's a pretty decent defensive catcher, and while he's not going to win any batting titles in the majors or minors, he is also not the sort to be completely overmatched by major league pitching, which would hopefully save him from the depths that Ryan Lavarnway fell to last year.

Even with Jose Iglesias and Dan Butler in the wings, though, this should be an area of concern for the Red Sox. The problem is that it's awfully difficult to find even the most marginal of talent that is willing to take a minor league deal. At least at third, some improvement could probably be made just by finding a more reliable option than Pedro Ciriaco for the spot on the 25-man roster, but finding real depth behind the plate is going to be a bigger challenge. They managed it two years ago, swinging a trade with Colorado for Michael McKenry, then in Triple-A, but it's not everyday such a deal comes along.

For today, and all the weeks to come, then, Red Sox fans will just have to hope this is one bridge they team doesn't have to cross this year.