Joel Hanrahan to the DL, Allen Webster called up

In a surprising move, it seems as if the Red Sox are bringing up a starter rather than a reliever from Pawtucket.

Share All sharing options for: Joel Hanrahan to the DL, Allen Webster called up

[Update 4:22 pm ET] Joel Hanrahan is officially on the disabled list with a right forearm strain, and Allen Webster has officially been recalled from Triple-A Pawtucket. In addition, Felix Doubront will be available out of the bullpen as of Tuesday night against the Twins, but is also expected to make his next start after that.

Brian MacPherson of the Providence Journal spotted him first, but the secret is out: Red Sox pitching prospect Allen Webster is back at Fenway Park on Tuesday. Webster, who was acquired in last summer's Nick Punto trade with the Dodgers, has thrown 20 innings with 26 strikeouts and a 2.70 ERA for Pawtucket, and impressed in his major-league debut late last month against the Royals.

While there has not been an official reason for his call-up -- nor, for that matter, an official call-up -- WEEI's Alex Speier says that Webster will likely get a start on Wednesday in Boston against the Twins instead of with the PawSox as originally planned. That would mean Doubront will either get extra time off, or will be playing the role of Clayton Mortensen in the Red Sox bullpen tonight, as Mortensen has thrown 111 pitches since May 1 over four appearances -- it might be a few days before we see him again, given that's a start's worth of pitches over the course of five days. 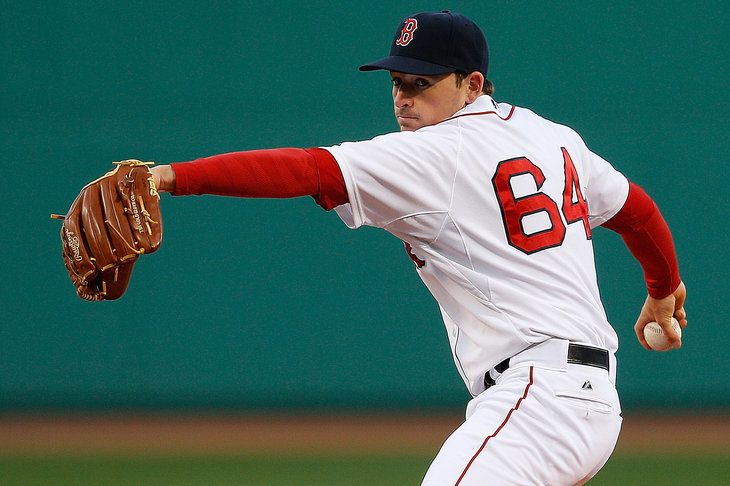 That all seems reasonable enough: Doubront would be pitching a day earlier than normal, but also wouldn't be expected to throw anywhere near his normal workload over a couple innings of relief. Webster would get a second shot to show that he's major-league ready now, further pushing Alfredo Aceves down that particular depth chart if Webster is to succeed in his quest, and Boston's overworked bullpen would, in theory, get most if not all of the evening off.

This is a bit surprising, as the expectation was that the Red Sox would bring up someone like Aceves temporarily, or utilize some of their relief depth at Pawtucket for the next week while Andrew Bailey recovers. Instead, it seems as if they're going to shake the rotation around a bit. Whether that's temporary, or is simply applying available resources where they are needed for a short-term patch, is unknown.

While there has been no corresponding move for Webster -- remember, it's unofficial at this point -- Joel Hanrahan to the disabled list is the most likely move given he exited Monday night's contest with an arm injury and is awaiting the results of an MRI.