Joel Hanrahan neither wanted, nor needed

Joel Hanrahan seems to be headed for the disabled list again. And the Red Sox are likely better off for it.

Share All sharing options for: Joel Hanrahan neither wanted, nor needed

Five weeks into the season, and Joel Hanrahan has used up his last bit of leeway. Good for a 9.82 ERA, a blown save risk every time he takes the mound, and now another injury--be it legitimate or simply an excuse--Hanrahan has brought little but grief to the Red Sox organization.

The good news is, they really don't need him.

With Hanrahan hurt, who will the Sox call up? 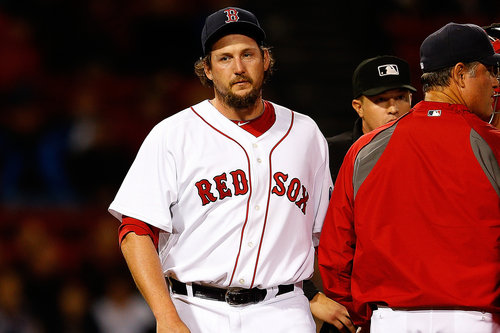 With Joel Hanrahan likely headed to the disabled list, who will the Red Sox tab to replace him on the roster?

Last night, the Red Sox lost Andrew Bailey and Joel Hanrahan to injury. While there's been no official move to place the latter on the DL, the smart money has him making his way there before game time tonight. They in turn gained Craig Breslow, making his return from injury. The thing is, the Red Sox did not come up negative in that balance. At least not by much. They lost the closer who would have kept Joel Hanrahan out of the ninth, but then lost Hanrahan himself, which means he can no longer hurt the Sox by pitching important innings. As for Craig Breslow, if he's not as good as Andrew Bailey at his best, he's one of the more consistently solid relievers in the league.

At the end of the day, then, the Sox are back to their three solid relievers. Tazawa, Uehara, and now Breslow in place of Bailey. It's a recipe that has left the bullpen wiped out at times, and frankly not ideal if the support cast of Andrew Miller, Clayton Mortensen, and Alex Wilson aren't doing their part.

Somehow, though, we know this is not how it ends. The Sox made a substantial if ill-advised investment in Hanrahan, and are not likely to let it go so easily. But they've been in this situation before, and there's a game plan for dealing with it. Last year when Mark Melancon was terrible in his first four games, the Red Sox shuffled him off to the minors before calling him back up in June. Melancon would pitch to a more reasonable 4.19 ERA the rest of the way, recording only two holds and one save in the process. Simply put, he became a mop-up pitcher, keeping him out of situations where he could really hurt the Sox, but boosting his value up to the point where the Red Sox were able to trade him in the first place.

The real value, though, will be keeping Hanrahan out of big innings. And after the heart attack that was Monday night, it's hard to put too high a price on that.