Umpire John Hirschbeck made himself the center of attention last night, once again highlighting just how bad the umpiring situation has gotten in baseball.

Share All sharing options for: John Hirschbeck and the league's growing umpire problem

Yesterday, umpire John Hirschbeck was manning third base in the Nationals - Pirates game when Bryce Harper tried to check his swing on a curveball from Wandy Rodriguez. The appeal went to Hirschbeck, who rung Harper up.

Harper was nonplussed, and he made his feelings known, albeit not in an egregious manner. He raised his hands--let's call it a "what gives" gesture--and that set old Hirschbeck off. The man in black started walking briskly towards home plate, mimicking Harper's gesture and shouting at the star outfielder. To his credit, home plate umpire Bob Davidson attempted to intervene, stepping in front of Harper and trying to talk him down. But Harper discarded his bat and helmet in a manner Hirschbeck deemed unacceptable, and he was gone.

On its face, this is already entirely beyond the pale of being acceptable. Umpires are, of course, authority figures on the field. They have to be in able to make the calls on balls, strikes, and outs. And the last thing an authority figure is supposed to do is escalate a situation like this. They exist to keep order. A necessary accessory (at least at one point) to the game whose only goal is to keep things flowing smoothly. A good umpire is one whose name you don't know. One who is never noticed.

Hirschbeck, however, did the exact opposite of what he was supposed to do. Not only did he escalate, he arguably initiated the situation. Every day players disagree with calls by umpires. That is run-of-the-mill. A shake of the head or look back on a called strike or, in this case, raised arms toward third. It's standard operating procedure, and the status quo response is to ignore it, because you're the authority figure, and that's part of the job description, implied if not written.

Hirschbeck, however, instantly drew the cameras with his exaggerated response. He imprinted his name in the minds of everyone watching. And sure enough, he completely disrupted the on-the-field product by ejecting Bryce Harper. In the first inning, no less.

If Hirschbeck's on-field actions weren't bad enough, he made the situation worse with his comments after the fact. From Bill Ladson's account on MLB.com:

"First of all, he put both arms up in the air. To me, I felt like that's showing me up," Hirschbeck said. "I yelled at him and warned him to stop. And then he continued and he slammed his bat down. I actually warned him again and then the next thing he slammed his helmet down, and I felt three warnings are more than enough."

And from Adam Kilgore

Hirschbeck said he was "being nice" letting Harper stay in the game. And then when he slammed his bat and helmet, "I had no resource.":

It's amazing that Hirschbeck thinks this is an excuse. It's not. In fact, it's just further damning evidence that he has no clue of his part in all this.

What he really seems to be missing is that none of the 24,000 fans who showed up at that game or the many thousands more who watched at home care about him. They don't care about his pride, or how it feels to get "shown up" by the 20-year-old Harper. The league pays him a pretty significant amount of money to make rulings on balls, strikes, and outs on the field and to ensure that the game goes as smoothly as possible.

Bryce Harper questioning him did not interrupt that. Hirschbeck responding and eventually ejecting him absolutely did. If a player "shows you up", be it Bryce Harper or Albert Pujols, or Yuniesky Betancourt, so long as they're not making a big show of it and interrupting the game, you let it pass. That he actually thinks he was "being kind" not tossing him for the simple act of questioning his call just goes to show how far gone the situation has gotten. The most insignificant man on the field thinks the players are privileged just to be able to play. 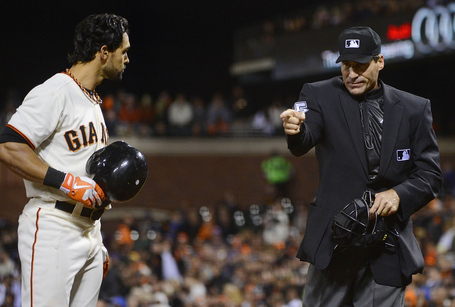 Some people are calling for Hirschbeck to be fined and suspended. It's probably worth noting that, in other lines of work, a member of staff initiating a confrontation with and ultimately expelling a performer from a venue they were expected to perform at would be a fireable offense. I'm not necessarily saying Hirschbeck is a bad person, or even a bad umpire who needs to be fired. Everybody has bad days when we look our worst, and for umpires those will, occasionally, come at the worst possible time, in front of thousands of eyes.

Luckily for Hirschbeck, though, he doesn't need to worry about serious repercussions from the incident, because Major League Baseball, as an organization, act strongly in situations like this. The result is that umpire controversy is becoming the norm, rather than the exception.

For years now, it seems like umpires have been getting worse and worse at their jobs. Maybe that's the case, or maybe we're just better able to see just how bad they are now that we've got electronic pitch zones showing their every mistake inning after inning. Either way, the performance is pathetic, but the same cast of characters returns year after year.

Even the worst-of-the-worst like Angel Hernandez, whose whole career is just a string of incidents like this one involving Hirschbeck has managed to hold onto his job. Yes, he's been fined. Yes, he's been suspended. But clearly whatever system of punishment and deterrence is in place is not enough, because stuff like this keeps happening.

A big part of this problem is likely the strength of the Major League Umpire's Association. Still, this is a fight the MLB has to risk if they want to maintain the legitimacy of their product. The time has come to make an example and hold an umpire accountable for bad job performance by doing the natural thing and firing them. It doesn't have to be Hirschbeck. It's hard to imagine, after all, that Angel Hernandez will make them wait long for an excuse to improve the game by removing him from the equation.

And, if in the end the union proves impossible to quell, that's really not a problem. After all, the technology is there to remove umpires from the equation entirely. They're an obsolete vestige of the past, and one that should really stop drawing attention to itself if it wants to continue its present parasitic relationship with the game.