Boston's ace needs a few more days after a throwing session revealed he was still sore.

Clay Buchholz was supposed to start on Monday against the Phillies, but was instead scratched due to collarbone discomfort. He was then scheduled to open up the series against the Yankees on Friday, but a throwing session on Wednesday revealed that he's still not feeling 100 percent. Now, Buchholz is scheduled for another session on Thursday, in the hopes of having him pitch the series finale in New York, rather than the first game.

Other changes need to be made to the rotation in his absence, though, since he would have been scheduled to pitch on Saturday if he the rotation was kept in its regular order. As the Red Sox are coming up on the end of a 20 games in 20 days stretch, they can't just use an off day to move the rotation around to where it needs to be. Instead, Franklin Morales will replace Jon Lester in Thursday's series finale against the Phillies in Philadelphia, with Lester pitching Friday in New York, followed by fellow left-hander Felix Doubront. Then, if all goes well on Thursday, Buchholz will finish up the series on Sunday. 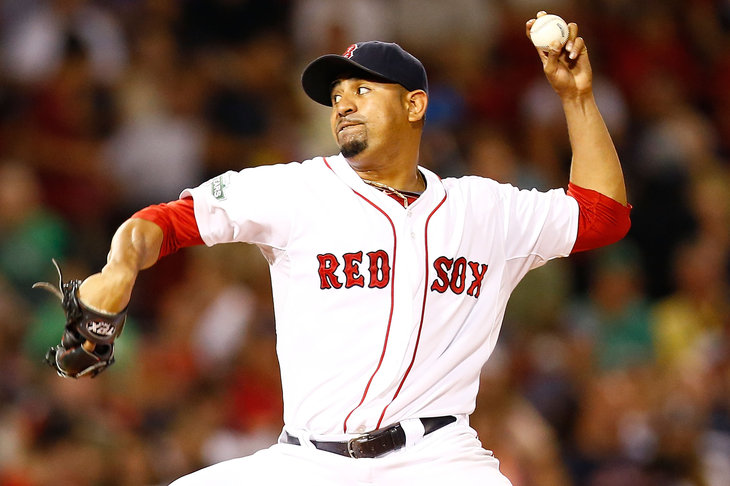 Franklin Morales is back in Boston, taking the place of Alfredo Aceves on the Red Sox' roster.

Morales missed most of spring training and has yet to pitch in the majors in 2013, but stayed on a lengthy rehab assignment in part due to a possible need to start. While the specific need has changed, Morales just came back on Tuesday, and hasn't pitched since he started last Thursday for the Double-A Portland Sea Dogs, making him available for this new issue.

It doesn't sound as of yet like Buchholz needs a stint on the disabled list in order to recover, but he last pitched on May 22. If he's not ready to pitch Sunday, and the Red Sox find themselves in need of a reliever like Alex Wilson or Jose De La Torre to help out the bullpen with Morales making a start, then he could be placed on the DL and miss just three games thanks to Monday's off day. It's likely the Sox will just wait it out, but we'll know more depending on how his next throwing session goes.