Share All sharing options for: Is Anthony Ranaudo a top prospect again?

With all the buzz following Matt Barnes, Allen Webster, and Rubby De La Rosa, it's no surprise that Anthony Ranaudo has been somewhat lost in the shuffle. He struggled for a time at the end of 2011, and, thanks to injuries, was never able to get right in 2012 after an aggressive promotion to Double-A by the Red Sox. He's back in Portland once more, though, and while it's just a handful of starts, he looks much more like the steal of the 2010 draft that the Red Sox hoped he would than he ever has.

Anthony Ranaudo was the top pitching prospect in the 2010 draft when the college season began, but things changed for him in a hurry. Elbow problems after his first start of the year caused him to miss a month -- a more significant length of time in the NCAA than in the pros -- and he was a shadow of himself upon his return. The Red Sox used one of their supplemental first-round selections to make Ranaudo the #39 pick in the draft despite the issues, because that's about the only way Boston was able to get top-10 level ceilings with their typical late first-round draft slots -- the same mindset led them to Jackie Bradley Jr. a year later. When Ranaudo dominated the Cape Cod League that summer, Boston looked pretty smart for selecting the 6-foot-7 hurler as late as they had.

Expectations were very high for the young right-hander, as Baseball America made clear with their report on Ranaudo entering 2011 before he had ever thrown a professional inning, ranking him the #67 prospect in all of baseball:

Assuming Ranaudo's elbow problems are behind him, Boston may have stolen a frontline starter with the 39th overall pick. He'll make his pro debut at high Class A Salem and could reach the majors by the end of 2012.

The end of 2012 has come and gone, and Ranaudo remains in the minors thanks to injuries that derailed nearly his entire season. Granted, even if he had remained healthy, a September call-up would have been a faster-than-expected pace for most, but this just goes to show you what kind of arm some prospect analysts believe he has.

His initial campaign in 2011 was a mixed bag. He pitched well at Low-A Greenville, striking out just under 10 batters per nine with over three times as many punch outs as free passes, but you would have maybe liked a little more from a college arm in Low-A, too -- remember, Matt Barnes flat-out dominated the same league a year later. Things slowed down even further a bit after his promotion to High-A Salem. There, Ranaudo struck out 7.4 batters per nine, saw his velocity slip a bit as he hit a wall mid-season, and posted a 4.33 ERA in his 81 innings.

Baseball America still felt he could be a number three starter in the majors, and pushed his timetable back one year to 2013. That was before he made just nine starts and pitched 37 innings for Double-A Portland due to injury, rendering 2013 an impossibility as that time would be needed in the minors to play catch-up on his development. When he did take the mound, he didn't have much to show, as he walked as many as he struck out (with too many of the former and not enough of the latter). Baseball America explains:

Some club officials thought his problems were as much mental as physical. Before Ranaudo got hurt, he was throwing 93-96 mph in short stints and showing a better curveball than he had previously as a pro. Both can be plus pitches, and he complements them with a solid changeup. When he's on, he repeats his delivery, uses his tall frame to leverage pitches down in the strike zone and works both sides of the plate.

He spent the off-season in winter ball, and while that was interrupted by a groin issue, he's back at Double-A Portland for a second go of things to see if he can capture the above quoted text and use it in game form after a year without. So far, so good: the results are much improved, and we're being reminded that a healthy Ranaudo is a prospect with a lot of potential. In his five starts and 27 innings, Ranaudo has punched out 30 batters, walked just six, limited opponents to one homer, and owns an ERA of 1.00. On Thursday, without his best strikeout stuff at his disposal, he still whiffed four in 5-1/3 innings and held his opponent to one run, four hits, and a lone walk. 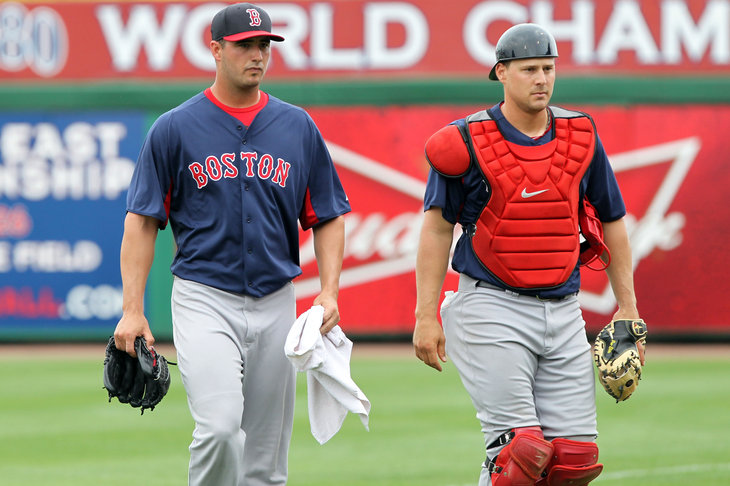 You might be surprised about which of these three is dominating opponents at Double-A.

It's just 27 innings, but if last year's 37 could be held against him as a prospect, this year's start should be to his credit. He still has a long way to go, considering that the primary issues with him in the past have been health and mechanical consistency -- he'll need to get through his first full professional season without either coming up before anyone can exhale on those matters.

He might not be back, but with the sudden plethora of starting pitching prospect depth in Boston's system, his success isn't as necessary as it once was, either. That's what makes the appeal of a return to form that much more intriguing, though: if Ranaudo can get back to where he was supposed to be all along, and he joins the likes of Barnes, Webster, and De La Rosa as the future of the Red Sox rotation, then whatever crowded rotation problems arise will be welcome ones.

Even if he can't hack it as a starter, but instead ends up in the relief role that many less enthusiastic prospect analysts felt could be in his future, it's not as much of a problem as it would have been for Boston at the time they selected him in the draft. If Ranaudo can just continue to stay healthy and develop himself into a big-league pitcher, everything else will fall into place. This season is just a start, but for the first time in awhile, it's one in the right direction.