And, as you can guess, he's playing through the injury.

Red Sox second baseman Dustin Pedroia has a full ulnar collateral ligament tear in his thumb. The thing is, the injury is not new, only the reveal of it is -- Pedroia likely suffered the injury back on Opening Day of this season, and has been playing with it for nearly two months' time. Despite the tear, he's having arguably his greatest season ever, as he's hitting .332/.422/.444 with a career-high 132 OPS+. Feel free to take a moment to shake your heads in disbelief.

The Boston Herald's Michael Silverman has the details on the injury, which likely occurred (or was worsened) when Pedroia slid headfirst into first base against the Yankees back on Opening Day. An MRI revealed... well, it revealed this injury, but the Red Sox didn't tell anyone, simply putting Pedroia back in the lineup for game two of the season, and every game thereafter, leading everyone to assume that the MRI was clean.

Doctors told Pedroia two key things: if he could play through the pain, he would not worsen the injury. You knew Pedroia would attempt to play, especially since there was no worry about causing further, long-term damage, and as the pain has not caused his production to suffer as it did last season, it seems like it was the right decision to make. The two concerns that should be ever-present with an injury are 1) will there be further damage? and 2) will production suffer due to the injury? -- two months in, it's safe to say that he's passed at least the second test, with doctors giving him the go-ahead on the one that's outside his realm of expertise. 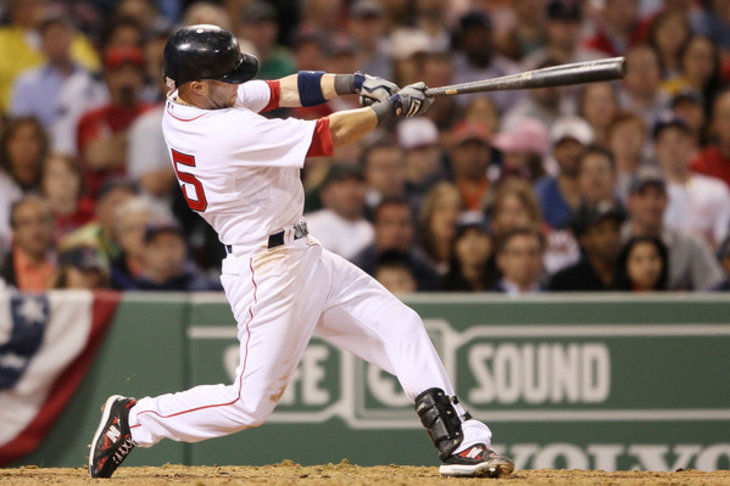 Pitchers can't get Dustin Pedroia out, so now they are content with just keeping him in the park.

The real kicker is that, had Pedroia stopped playing to recover, he would be returning to action right about now -- the expected downtime for the torn thumb UCL is in that six-to-eight weeks range. You can imagine what kind of condition Boston's record might be in if Pedro Ciriaco had been the second baseman for the last eight weeks, rather than Pedroia, who currently leads the team in wins above replacement with more than double that of the next-highest Sox player.

It's no wonder, given Pedroia's nature and the lack of depth behind him, that he would see if he could handle the pain. He's been able to do just that to this point, and it's a large reason, if not the largest, the Red Sox are currently in first place in the competitive AL East. With any luck, he'll keep it up, and the Sox will do the same.