Share All sharing options for: Is Red Sox starter John Lackey really back?

There's an old saying that golf takes place in the six inches between the ears, and there's a compelling case that the same is true for pitchers. John Lackey, a hero of the 2002 World Series and a villain of the 2011 Red Sox, is as good as he's ever been a year-and-a-half after he hit bottom. He boasts a 2.78 ERA and solid peripherals through seven starts heading into Wednesday's, and appears to have recovered from his early season biceps strain. What can expect from Lackey from here on out, for both the rest of the season and going forward?

The prognosis for tonight is good. The Phillies have serious problems on offense, as we've seen over the last two days. Anything could happen, but unless Lackey has a complete meltdown in his forthcoming start against Texas, and not tonight's tilt, he looks to be as much of a bellwether as a pitcher can at this point in the season.

Read More: Red Sox first in the East, all according to plan?

FanGraphs is bullish that Lackey's trend line is moving up. Dan Wade says Lackey's throwing his four-seam fastball more often, which has "has made his cutter and curveball look that much more effective by keeping hitters off balance." David Wiers called Lackey's most recent start against the Cleveland Indians "masterful" and encouraged fantasy owners to scoop him up immediately. He warns not to expect a sub-3 era for the remainder of the season, but implies that it will stay below 4.00.

The computer projections on FanGraphs aren't as kind. ZIPS predicts an ERA of 5 for the remainder of the seasons, while STEAMER predicts him to clock in at 4 for the rest of the way, putting him at 3.67 for a full year. Based on the anecdotal evidence that computers do not have -- that Lackey's messy divorce is over, that he has noticeably lost weight, that his elbow is no longer shredded, and Bobby Valentine is nowhere around (not in disguise, anyway) -- the STEAMER projection seems more likely than that of ZIPS, which is sucking from the black hole of 2011.

At this point it's something of a miracle that Lackey's pitching at all. He was brilliant in his first start in Toronto before suffering the biceps injury, which looked to be potentially catastrophic after the Tommy John surgery that caused him to miss all of 2012. When it only kept him out for two weeks, he returned with the highest fastball velocity and first strike percentage of his career. His batting average on balls in play is an unremarkable .282, suggesting that his performance this year is not a fluke. 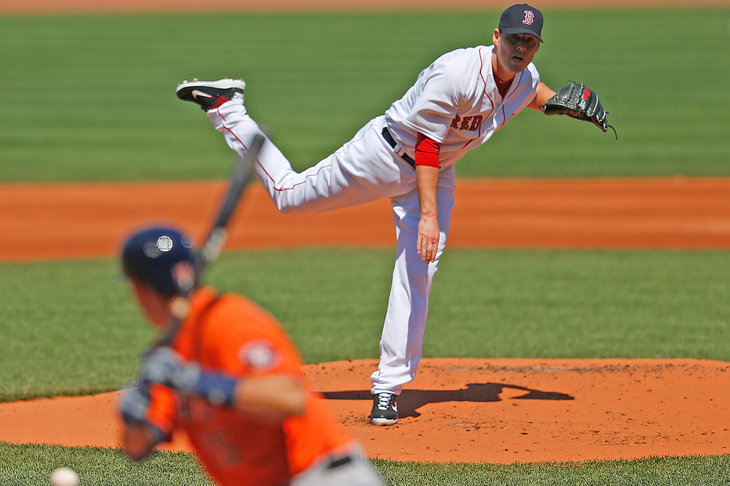 His nightmare 2011 seemed to exclude the pitch, but Lackey is back and throwing sinkers in 2013.

Lackey is Boston's highest-paid player this season at $15.25 million, which he will also earn next season, the final guaranteed year of his 5-year, $82.5 million contract, which has a conditional 2015 extension that will make him Boston's lowest-paid player, and guarantees Lackey the use of a suite on the road. Lackey threw the ball strong in 2010, putting up a 3.9 fWAR and a 3.85 FIP, but it's been a disaster in every way from then until now. Now it's the type of revelation we watch baseball just to see.

Of course, it's a long season, and things could go south once more. Baseball's fickle like that, but it's given John Lackey back to us, a lottery ticket that we wouldn't have dared to dream was worth a nickel as recently as March. As the Sox continue their march toward the playoffs, the new Lackey could inexplicably be the biggest difference between a dream season and another end-of-year heartbreak.