The Red Sox have called Jackie Bradley Jr. back to the majors, optioning Alex Wilson to Triple-A Pawtucket.

Jackie Bradley Jr. will make his return to the major leagues Wednesday night in Philadelphia. Down a position player for a few days now, the Red Sox have called Bradley back up, optioning Alex Wilson to Triple-A Pawtucket.

It's been over a month since Bradley was sent back to the minor leagues following a disappointing major league debut. Though he was unable to capitalize on his spring training success while with the Sox, Bradley has regained all his momentum in the minors, even with some time off mixed in. He's hitting .360/.461/.547 for Pawtucket in 75 at bats, and is in the midst of a hitting streak that has made it to double-digits.

The question is how much of this will translate to the majors? Has Bradley figured out those inside pitches that so tormented him in April? One assumes that the Red Sox have not called him up to ride the pine--with Jonny Gomes struggling, Bradley will likely get some time in right field, allowing Daniel Nava to shift back to left.

Red Sox minor lines: Jackie Bradley Jr. does it all 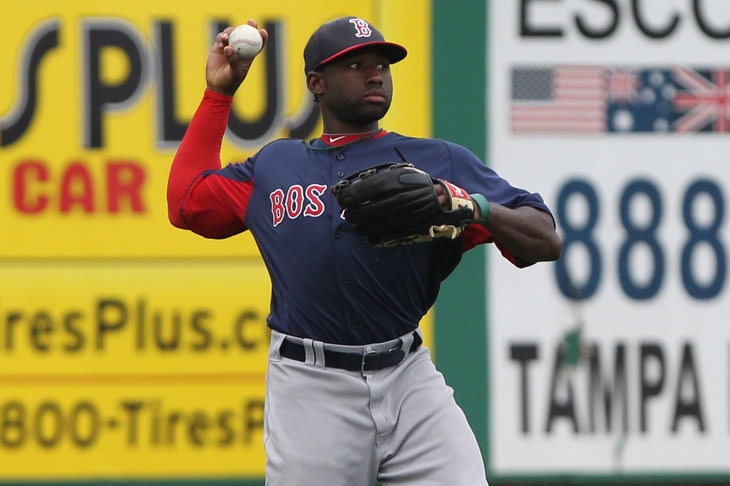 Jackie Bradley Jr. puts up a big night in Pawtucket, while Salem gets shut down.

Even if Bradley does well, the chances are he's headed right back to the minors once Shane Victorino is ready to return. The Sox have enough depth in the outfield as is if everyone's healthy. For now, though, he'll get a chance to prove that he's ready for the call-up whenever the Sox should need him.

As for Alex Wilson, the only reason he's headed down over the struggling Clayton Mortensen is a bad case of "having an option". The Red Sox hoard their players, sometimes to a fault. Hopefully given the sort of role Wilson and Mortensen have in the bullpen, it's a decision that will have little impact.