Red Sox first in the East, all according to plan?

The Red Sox are first in the American League East. Is all going according to plan, or have the Red Sox taken an unexpected path to success?

Share All sharing options for: Red Sox first in the East, all according to plan?

Through 52 games, the Red Sox are sitting on top of the AL East, which is not where most of us expected them to be. From he everyday fan all the way up to Ben Cherington, there was certainly hope. This team's actions in the offseason were not indicative of a team that had given up on the upcoming season, but even the most optimistic of fans would have admitted that being on top of the division nearly one third of the way through the season was would be a difficult goal to achieve.

So how is it we got here? Is it Ben Cherington's offseason plan working to perfection? Is it the stuff of miracles? Is it something in between?

The first thing worth noting is that the best players on the team were already here. Right now, the top-three with the bat have been David Ortiz, Daniel Nava, and Dustin Pedroia. The top-three in the rotation are Jon Lester, Clay Buchholz, and John Lackey.

This doesn't just mean that the Red Sox backed into a winning team. What it does mean is that the simple decision to build in the offseason rather than just punt is noteworthy in itself. After all, last year this core (plus Adrian Gonzalez and Josh Beckett) led the team to a 69-93 record.

The key was to see past all the injuries to recognize that there was already plenty of value on the team. While the team was terrible last year, it was terrible after losing David Ortiz, and with both Daniel Nava and Dustin Pedroia playing through injuries. Of the pitchers, John Lackey was recovering from Tommy John surgery (and, also, y'know, John Lackey) while Lester was struggling through the worst year of his career. Even Clay Buchholz was dragged down by his terrible opening month. While it sounds silly to call it an achievement to see talent in David Ortiz, Dustin Pedroia, Jon Lester, and Clay Buchholz, it takes real guts to take a 69-93 team and try to make a contender out of it.

For all that Ben Cherington may have been hoping for big things from the likes of Ortiz and Pedroia, what he's gotten so far from his stars has been unreal. Even with his power numbers down, Dustin Pedroia's offensive numbers are better than they were during his MVP season, and he remains, as ever, Dustin Pedroia on defense. And simply getting "more of the same" from David Ortiz is kind of unreal given his injury.

On the mound, Clay Buchholz has put it all together really for the first time in his career. This is not even the Clay Buchholz of 2010 with the tiny ERA and the mediocre peripherals. He's taken it to another level so far. And if Jon Lester isn't quite his old self in terms of strikeouts, he's getting the job done in different ways this year.

The outliers are, of course, Daniel Nava and John Lackey. Both of them really fit better with the "lottery ticket" approach that defined the offseason's acquisitions.

In a way, the Red Sox made themselves into the league's island of misfit toys this offseason. There was outfielder Shane Victorino coming off a bad year at the plate. Mike Napoli with his degenerative hip condition. David Ross, the aging backup catcher. Ryan Dempster, whose performance with the Rangers left his ability to perform in the American League in question. Jonny Gomes, the platoon outfielder with aspirations of starting. And Stephen Drew, looking for all the world like his injuries had ruined him once-and-for-all. Add in John Lackey, ace-turned-pariah, and Daniel Nava, who seems practically the definition of misfit, and it's one weird collection of supremely flawed talent. 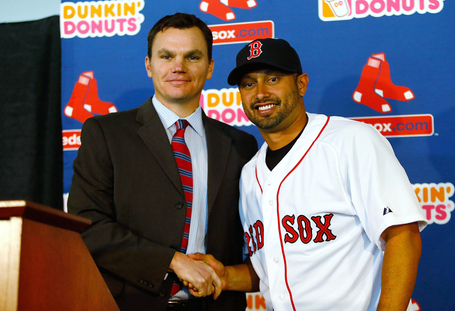 The key for the Red Sox was to have a few of these talents hit, and to have decent replacements available for any that truly bombed. Curiously enough, though, they haven't really had the extreme result for any of their acquisitions. Mike Napoli's hip hasn't made itself known, but neither have his ridiculous Fenway numbers. Shane Victorino is fast becoming a fan favorite with his defense, but his bat isn't really improved from 2012. Stephen Drew is on the rise in a big way, but taken as a whole his season isn't anything special. David Ross has been good, but not able to take much more time than a typical backup from Jarrod Saltalamacchia.

Arguably, the biggest flops of the bunch are Ryan Dempster and Jonny Gomes. Even if you don't give Dempster any leeway for his recent struggles based on his pitch count in Minnesota, though, he's still rocking a 3.70 xFIP. As for Gomes, he hasn't even been hitting the lefties he was expected to, but he's also not seen 100 at bats yet.

With just these middling performances from their offseason additions and the excellence of Ortiz, Pedroia, Buchholz, and Lester, the Sox would definitely have a good team. But it's the unexpected performances that have really put them over the top. Daniel Nava has been looking like the same player he was before his wrist injury developed in 2012--an All-Star caliber player, frankly. John Lackey has been the pitcher that was promised back in 2010. Better, even, with all the strikeouts we've seen so far. Add on some very surprising performances from Mike Carp and Jose Iglesias, and you've got, somehow, a 32-20 team.

Has it all gone according to plan? Not really, no. While only Joel Hanrahan (his saga having been omitted from this piece for the sake of our collective sanity) and Jonny Gomes have really flopped thus far out of Boston's many acquisitions, none of the free agent acquisitions have really done as well as could be hoped. It'd be surprising if Ben Cherington and co. were expecting to compete at this level without hitting on at least one diamond in the rough.

For all that, though, here the Sox stand at 32-20, on pace for 100 wins. And while that depends on the best players maintaining their production, there's also hope for improvement from those offseason acquisitions who haven't lived up to their full potential yet. The pendulum can swing in either direction from here, or the status quo can continue.

If there's one part of the plan that definitely seems to be working so far, though, it's the team as a team. It's easy enough for a club to gel when they're winning, but even through the 3-9 run to start May, this team didn't really flinch. We didn't see any ugliness emerge. Shane Victorino continued to throw himself all over the place, Koji Uehara continued to dole out high fives after every big performance. At no point did John Farrell accuse a player of not caring about the game, or make sarcastic comments to a player after a bad inning or game.

Clubhouse dirt can come out at any time, but at least through the first two months of the season, the detoxification of the team seems to be a remarkable success. John Farrell may infuriate with his slow hooks every once in a while, but it behooves us to remember how much worse it could be. It's hard to say exactly what effect that sort of positive environment can have on a team's on-field performance, but it certainly can't hurt, and it was clearly one objective of the offseason. In that, at least, everything has gone perfectly to plan.