Boston's rotation looked like a strength in April. Now, in May, is some of the shine starting to wear off?

Coming into the year, everyone was worried about the rotation. Then April happened. Jon Lester and Clay Buchholz were incredible, Ryan Dempster was striking everyone out, Felix Doubront was serviceable, and even John Lackey showed promise. John Lackey! Boston starters ended the month with an impressive ERA of 3.24.

It's not April anymore, and slowly but surely the performance on the mound has started to slip.

Obviously there's not much going wrong with Clay Buchholz right now. If he hasn't been as good as he was to start the season, that's because Pedro Martinez in his prime couldn't maintain that level of performance. With a 2.31 ERA and 34:14 K:BB in 35 innings, Buchholz is the last of their problems.

Jon Lester's recent performances have been somewhat less impressive. He mixed in a complete game shutout, yes, but as good as that performance was, it didn't pack the punch games of that level usually do. He's struggled to strike batters out, getting by as much on sometimes iffy results in balls on play. Seeing him allow five earned runs in Chicago, while still out of the ordinary, didn't exactly come completely out of nowhere. Still, on the whole it's not a month that should engender any real concern. The top-two arms, at least, seem safe for now.

The rest of the bunch is where it gets concerning.

Let's start with the biggest problem: Felix Doubront. To his credit, after starting May with twelve earned runs in two outings, Doubront has allowed just two runs in each of his last two starts. He's survived. However, one of those starts saw him walk six batters, and even in his last outing it rarely felt safe. 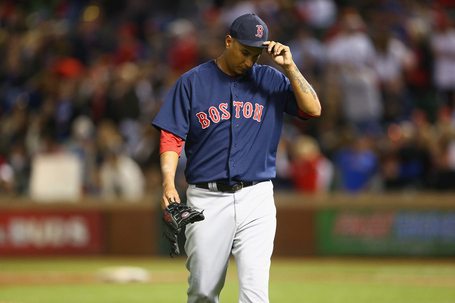 There's also the fact that Doubront's velocity still hasn't really improved. He's hit 92 a couple of times recently, but that's not the mid-90s peak we expect out of him. For another pitcher, this might not be such a big deal. They could learn to adjust to their new levels. But Doubront was always the guy who blew away just enough batters that his walks and missed spots that led to big hits weren't enough to completely undo him. When you can argue that he never fully learned to even be that pitcher, it's hard to imagine he's about to make the transition to a junk-throwing ground ball specialist or anything of that variety.

When Doubront was the only immediate concern, that was fine. John Lackey, after all, has been pitching very well this year, and bounced back from a rough game against the Rays with six strong innings against the Twins, allaying any fears that inevitably will crop up with the first sign of trouble from him. He's lost a lot of weight, worked hard to come back from Tommy John Surgery, and while he might never earn a positive reputation in Boston after the disaster that was 2011, at least for now it doesn't feel like the team is forfeiting games by having him on the mound.

The problem there is that, at least for now, any evaluation of Boston's rotation that includes John Lackey as a valuable piece is going to come with a nice big asterisk, because it's really hard to believe he's going to stay productive. On some level this goes beyond simple rational reluctance to buy into 35 innings of good work after the poor start to his Red Sox career, but even the most coldly objective look at Lackey makes it hard to pencil him in as a solid number three.

And that's what makes Ryan Dempster so important, and makes his recent struggles so concerning. It's been three straight outings now that have seen Dempster knocked around. First against Toronto thanks to homer after homer, and then against the Twins and Indians thanks to missed location after missed location. Dempster can't keep the ball down and can't find the zone. American League lineups just aren't going to lose to pitching like that.

The good news is that these are just three starts. And, frankly, if John Farrell hadn't tried to get him the win against the Twins, we might not even be in this situation right now. Dempster could have left with 4.2 innings of three-run ball. Not good, but not alarming, and it would have kept him from throwing 127 pitches, which would have kept him from changing his routine between starts, which may have led to a much better game against the Indians last night.

The other positive is that the depth is absolutely there in the minors. Yes, Allen Webster was wrecked in his last start, but he's far from done, and Rubby De La Rosa has been absolutely killing it in Pawtucket ever since he shook off the rust.

Still, nearly two months into the season, the question marks have started to seep back into the rotation. That Jon Lester and Clay Buchholz have both eliminated any lingering fears is certainly a positive, but as we learned in 2011 having two top options is not enough to get the job done. For now, the Sox will wait it out, and that's fine. If Lackey keeps rolling, if Dempster bounces back, if Doubront can find his velocity, or if Franklin Morales can take a spot, then all will be well. But it's certainly something to keep an eye on as we get further into the season and closer to July.