Will Jose Iglesias get another chance with the Red Sox?

Once the heir apparent at shortsop, Jose Iglesias' path to the majors has gotten murkier and murkier. Will he even have a chance to find his way back?

Share All sharing options for: Will Jose Iglesias get another chance with the Red Sox?

A month ago, the fans were calling for Stephen Drew's head, and Jose Iglesias' return to Fenway. Iglesias had started the year on a tear, and Drew, when he finally made his way off the disabled list, was abysmal at the plate.

Then came May, and while Drew found his bat in a big way, Jose Iglesias was busy proving in Triple-A that the major league results were as fluky as they looked, and even finding his way onto the bench amidst rumors of a negative attitude (ones enforced by cryptic but discouraging comments made by John Farrell).

Signed in 2009 to a major league contract, Jose Iglesias has been burning options non-stop. For a typical player, those options would have run out last year, but given the nature of Jose Iglesias's contract as an international free agent, the Red Sox were granted one more season to keep Iglesias in the minors. Now two months into that season, the team is not really any closer to solving the Iglesias situation.

The awful solution would be for Stephen Drew to collapse, be it due to injury or just plain poor play, leaving Jose Iglesias the only real option to take over in the immediate future. Right now, though, the Red Sox would probably just as soon avoid that particular scenario.

The better solution, and the one the Red Sox seem to be aiming for at the moment, is to simply not force the issue, and tab Iglesias as a backup until he proves otherwise. Iglesias has just started to see time at third base in the minors, perhaps setting up a promotion to take over the backup infielder role currently occupied by Pedro Ciriaco, who has done little of value for the team other than chase the record of fewest pitches seen in nine hitless at bats. 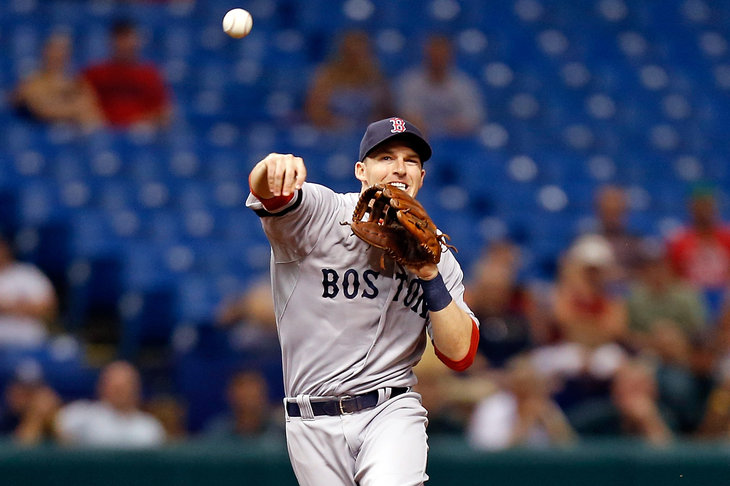 Stephen Drew is yet to miss any significant time this season, though he's suffered some minor injuries. In his absences, the key to his presence has become abundantly clear.

Eighteen, for the record. It's insane.

To this point, the reservation that's kept the Red Sox from taking this tactic has been over playing time. If Jose Iglesias is a backup, he's not seeing at bats. If Jose Iglesias is not seeing at bats, how will he get better? The problem right now is that it doesn't seem like the last couple years of at bats have really done Iglesias too much good, and they're only so many months from having to either take that playing time hit or take a massive risk on heading into 2014 with Iglesias as their main option at shortstop.

Simply put, it's getting to be sink or swim time for Jose Iglesias in Boston. They've tried teaching him in the shallow end, now it's time to throw him in deep. Unfortunately, if this is how it ends up for Iglesias, he won't have the opportunities that could help him learn to do so, and that's unfortunate. But it's also just about the only option he's left them with. And besides, a team could do a lot worse than having that glove for a backup/defensive replacement.