Andrew Bailey is back from the disabled list, leaving the Red Sox' bullpen in the best shape its been in all season.

Share All sharing options for: With Bailey back, Red Sox' bullpen solidifies

It's been a bit touch-and-go for the Red Sox' bullpen this season, but for the moment it seems to have finally settled down.

From the beginning, it's been one thing after another for the bullpen that was expected to be one of the team's strengths this season. Craig Breslow was the first to fall, not seeing so much as an inning in spring training as his shoulder sidelined him. While the Red Sox still started the season with an ostensibly strong back-three in Junichi Tazawa, Koji Uehara, and Joel Hanrahan, it did not take long for Hanrahan to reveal that he was not over his September 2012 struggles. Before long, he was on the disabled list as well.

With the fall of Joel Hanrahan came the rise of Andrew Bailey, who proved he still had the talent that the Sox initially traded for after 2011. The problem was that beyond Tazawa, Uehara, and Bailey, nobody was stepping up. Andrew Miller and Clayton Mortensen struggled early, while Alfredo Aceves remained the same wreck of a pitcher he was in 2012. Brief visits from the likes of Stephen Wright and Daniel Bard, leaving the important members of the bullpen called on in games they never should have seen action in. With Felix Doubront and John Lackey's replacements struggling to go deep in games, the bullpen was constantly in distress.

The situation seemed ready to go critical when Joel Hanrahan's return proved a disaster, only ending with surgery and the likely end of his Red Sox career. Frankly, though, that was a step in the right direction, part of a positive trend that was arguably well underway by that point. 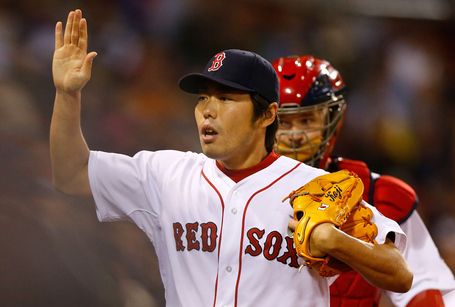 Counter-intuitively, the repair process is centered around the least impressive arms in the pen. Simply enough that's because the Sox have never been at a lack for an eighth or ninth inning guy. If Hanrahan was a disaster, Andrew Bailey was there to take his place. Even when Bailey was out, the combination of Tazawa and Uehara would be enough to handle the really difficult situations. The problem was getting the ball to them, and keeping them out of blowouts.

In that department, the first man to make a difference was Alex Wilson. His results so far--a 1.26 ERA with runs allowed only in games that were clearly lost or won--seem unsustainable given his 11:7 K:BB ratio. Still, Wilson has a level of reliability to him. As a former starter, he can eat some innings when it's really necessary, and has only been getting better on the mound with more time in the majors. At some point he'll give up a walk and then a homer--fly balls won't always stay in the yard, and walks won't always be stranded--and he's not exactly the guy you want pitching the eighth just yet. But for a sixth-inning pitcher or someone who comes in during five- or six-run games, Wilson is a far sight better than the likes of Daniel Bard or Alfredo Aceves.

Then there's Andrew Miller, who can best be described as a roller coaster in pitcher form. Through the first three weeks of the season, he seemed an absolute wreck, but the pitcher we've seen ever since has been a monster. In 10 innings of work since April 21st, Miller has struck out 17 batters and walked two using surprisingly good fastball command and the biting slider which has lefties looking completely helpless. Of course, there was a three-run disaster mixed in there, but it wouldn't be a roller coaster without the dip. While there was initially some question whether the Sox needed a lefty-specialist back before Hanrahan's surgery and the change in Franklin Morales' expected destination, now he certainly seems capable of contributing.

The most important return, however, has been Craig Breslow. It's actually surprising to realize he's been back for two weeks and pitched in eight games, allowing just one earned run. While he's clearly still working to get back to full strength, he's managed to keep his recovery period from costing the Red Sox much in terms of runs. For the last five years, Breslow has been one of the league's most consistent relievers. As a lefty who can face righties, he's easy to slot in in either the seventh inning or whenever the opposing team's best lefties are coming up to bat. Frankly, he's a ridiculous luxury for a team with Uehara, Tazawa, and Bailey to have, but Red Sox fans won't complain about their good fortune there.

The remaining man is Clayton Mortensen. He's been no great shakes, frankly. Even though he's kept runs off the board of late, he's made an adventure of it too often to really inspire confidence. The good news, though, is that he's not much more than a long reliever right now, rather than the sixth-inning option. If the game is clearly lost or won, the Sox can turn to him, and he'll hopefully give them enough pitches to keep the rest of the bullpen alive.

And, really, so long as the Sox can hold to just three other relievers in a game, they'll have three men ready for the next game. Having that sort of security is a far cry from where the Sox found themselves just a few weeks back, when Tazawa and Uehara seemed the only options, in use night after night. Hopefully that's a place the Sox don't find themselves in again anytime soon.