The league says games are too long already, and replay will make them even longer. But three-hour rain delays? No problems there.

Here at Over the Monster, we Red Sox fans have heard the complaints year in an year out. These games are just too long. Against the Yankees, four hours seems the minimum. Pitchers take too long to throw, they make too many pickoff throws to first, and in the end the hours of our life are the cost.

It's an argument that holds some small sway--we certainly don't love it when a Saturday afternoon game trickles into the night and interrupts other plans. But more often than not, it's met with derision. Joe West, who made his feelings on the subject known a few years back, is pretty much persona non grata around these parts, though that's true of most any umpire who tries to make themselves the center of attention.

Generally speaking, though, Red Sox fans do not so much mind a game going four hours when there are seventeen runs scored, as happened on Saturday, or even five runs with a bunch of men left on base and an extra inning tossed in, like we saw on Friday. That, simply put, is baseball, and if it's an excess of well-worked at bats taking up our time, that's kind of what we're here for. And yet, still, without fail the media will be there to harp on it in the morning, Joe West will provide a musical press release, and the league will hem and haw and talk about shortening games.

On its own, that situation is annoying enough. But what takes it into the realm of the bizarre is how much attention is paid to time "wasted" watching baseball, and how little is paid to time wasted during rain delays.

Yesterday, the Red Sox and Twins waited three hours for the rain to clear up enough for them to finish the last three innings of a baseball game that could have easily been called after six. This is the exception, obviously, but not by as much as we'd like. It seems as though the two-hour delay is shrugged off without anyone so much as blinking.

Well, anyone not named David Ortiz:

Raining for 2 hours and nobody will call the game.... Come on!!!!! twitter.com/davidortiz/sta…

In some situations, this makes sense. A blowout that's not official yet probably shouldn't simply be erased. Other times schedules don't permit for easy makeups. Often enough, though, it's a matter of a 6-2 game--or 3-1, as we saw last night--which can simply be cut short. It's not the ideal scenario, since in the end the game wasn't allowed to take its full course with bullpens and benches entering the equation, but at some point we just have to accept that rain screws games up. If cutting it short is unfair to the team with the lockdown bullpen, a team with a far superior starter is already going to take an unfair hit if the rain continues.

To make a long story short, once the rain arrives, there's no way to really achieve perfect legitimacy, so any appeals to the sanctity of a nine-inning game are already on shaky ground.

The fact is that it just doesn't make sense for so much attention to be paid to game time and so little to rain delay time. When the umpires pull the tarp with no end to the rain in sight, they're essentially holding fans both at the stadium and at home hostage. Information is usually limited to little more than Doppler radar, and when a fan hears that the rain isn't expected to move on for hours but the game isn't called, they're stuck wondering if the umpires are planning to squeeze it in during lighter rain, or are just showing wanton disregard for their time, as happened yesterday. And so they'll stick around for thirty minutes, and then an hour, and then after an hour has gone by it would seem like a waste of an hour to just call it quits then. It's that tricky scenario: do you keep waiting for the bus, or start walking knowing full well the bus could be right around the corner? 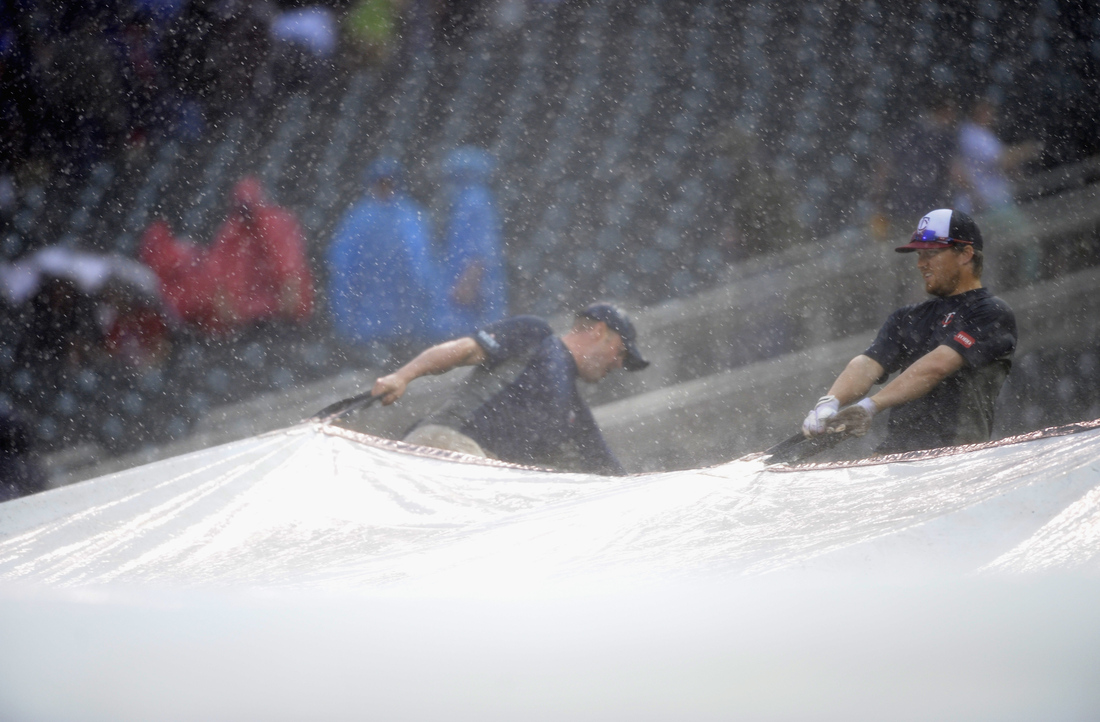 At some point, there really does need to be a limit set. The league needs to step in and say that if a game can simply be called early, and the rain isn't expected to leave for two or three hours, then it must be called. Even outside of those scenarios, there, the league at least owes its fans better communication. The umpires tend to disappear, and then the first thing we hear outside of speculation by the media (who might even chime in with a source or two) is official word that the game will start in 15-20 minutes. In a 30-minute delay, that's fine. In a multi-hour delay, it's a pathetic lack of communication.

There are things that baseball fans are happy to invest their time in. An extra hour in a high-scoring shootout? Sure. Thirty minutes in a big rivalry game? Alright. Three minutes so that the entirety of a three-hour baseball game isn't made illegitimate by terrible calls on the field? Absolutely! Two hours to turn a seven-inning decision into a nine-inning decision or, God forbid, to have the game called even after the long delay? No. Not so much.

Is this going to change any time soon? It seems unlikely. The league tends to be tragically unconnected to the actual concerns of their fans. Still, if they're not going to fix the problem, the least they can do is stop making noise about the situation. It's clear that the time of the fans is not actually at a premium, so using it as an excuse to deny us things like comprehensive replay enters the realm of the insulting.