The Red Sox' power outage is no more

The Red Sox took a while to find their power swings, but now the long balls are flying.

Share All sharing options for: The Red Sox' power outage is no more

It wasn't even a week ago that we were talking about how impressive it was that the Red Sox were getting the job done on offense even without much in the way of a power game.

Well, it turns out that five games can make an awfully big difference. Especially when they come against Houston and Toronto in Fenway Park and Rogers Centre. In those five games, the Red Sox have accumulated 30 extra-base hits, including 16 doubles, two triples, and 12 home runs. The result is that they now have the majors' second best marks in both slugging and isolated power, trailing the Rockies by one point in the former category and the Indians by six in the latter. 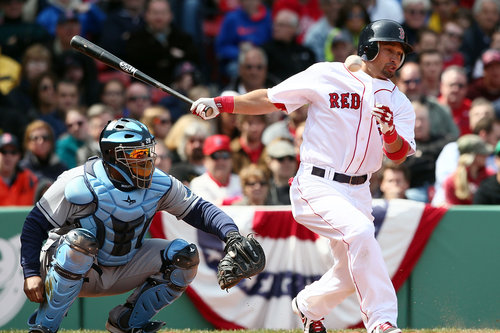 So, what's changed? Part of it is, simply enough, the names in the lineup. And it all starts with David Ortiz. While the Red Sox got their DH back well over a week ago, even for a player hitting like Ortiz has it's going to take a little bit for their performance to actually show up when looking at team-wide numbers. Still, it's hard to imagine anyone with so few at bats having quite such a ridiculous effect. In his 39 at bats so far this season, Ortiz has a slugging percentage of .897, which is a full 175 points higher than the leading qualified player in Justin Upton. Just over these past five games, Ortiz has contributed a ridiculous 18 total bases to Boston's attack.

Another player seeing his first major share of playing time is Mike Carp. While nobody can doubt the contributions of Shane Victorino so far this year, they've certainly come in the field more than at the plate. In fact, the outfielders' .028 ISO is the lowest on the team, behind even Jackie Bradley Jr. Carp, on the other hand, has been hitting the ball with remarkable authority, picking up two homers and a double in just his last six at bats.

Even David Ross has been swinging a hot bat when given the start over Jarrod Saltalamacchia, with his two-homer night against the Astros the trumpet blast that kicked off this recent run of power.

Of course, all this would be dampened if the players that had been hitting for power stopped, but that's not the case at all. Instead, Mike Napoli took it to another level with a pair of tape measure shots, two of his five extra-base hits over the five-game span in question. And if Daniel Nava hasn't exactly been on fire (a few good defensive plays being largely to blame for that), he got back to the long ball yesterday and has 11 bases to his name in these past five games all the same. 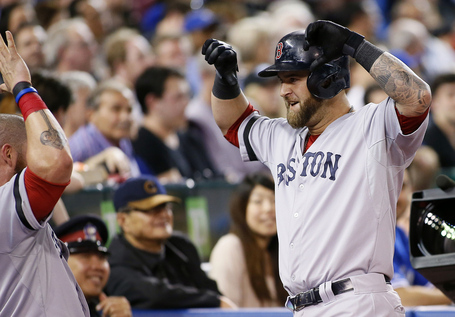 So what, then, is the Red Sox lineup? Right now it really does have the feeling of those teams in 2003 and 2004 that threatened to change the score with every swing of the bat. But it's likely some of that is due to the competition and venues we've seen in these last five games.

It's clear that the Sox do have an impressive, powerful core in David Ortiz and Mike Napoli. No matter what happens, those two can hit the ball out of the park. Will Middlebrooks and Jarrod Saltalamacchia act as a sort of second layer behind them, with Mike Carp and Jonny Gomes the sort of players you wouldn't mind tasking with a game-saving homer off the bench in the late innings.

Initially I was of the mind that when Victorino returned to the lineup, the Sox would return to a less explosive, more consistent form of offence. But I'm starting to wonder if that's selling this bunch short. The power shown by the likes of David Ortiz, Mike Carp and, frankly, even Daniel Nava is likely more than they can maintain over the course of the season. But then there on the flip side of things how long is Dustin Pedroia going to go without a homer? Victorino himself? Was Jacoby Ellsbury's 2011 performance such a complete fluke that he's only good for one a month?

For all that the Sox have some players who are unlikely to keep up their huge performances, there are about as many who can be expected to pick it up. Until they do, though, it's on the shoulders of the likes of Mike Napoli and David Ortiz to keep the runs flowing. So far, so good.