The Blue Jays' Edwin Encarnacion had his home run fun on Tuesday, but on Wednesday, Mike Napoli got to showing him how it's done. Encarnacion's impressive blast went 427 on a pulled homer to left, but Napoli's first of the evening went 472 feet to dead center. Like, as dead center as you can physically get:

That 472 feet, by the way, is the third-longest home run of the season, and since it went to dead center, is likely the most impressive of the young 2013. Well, maybe. His next shot traveled five feet shorter, but, well, look at it:

Fourth deck, left center. Red Sox announcer Jerry Remy said he had never seen a ball hit there before, and while I haven't watched every game at the Rogers Centre, I can't remember a ball going to that deck and that part of the field. Napoli just does that beer league softball uppercut thing he does so, so well, and hits a 3-0 pitch about as far as you can hit one.

The second angle from the replay might do the shot even more justice, though:

Hit Tracker already plotted these long balls -- hence knowing the distances of them -- but they also created these handy charts detailing the trajectory and landing spots for each: 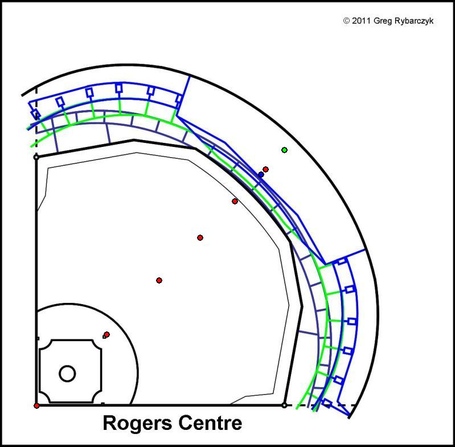 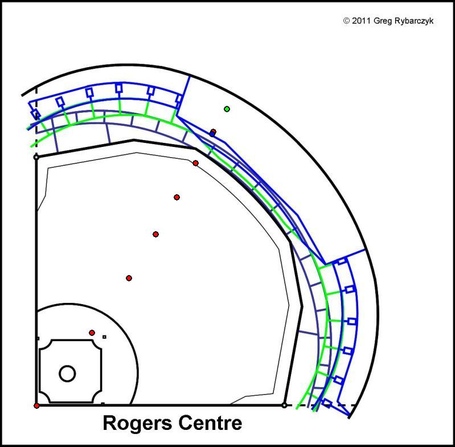 Following Wednesday's performance, Napoli now owns a career .611 slugging and .389 Isolated Power at the Rogers Centre. It's just 83 plate appearances, but that's only because the Blue Jays traded him for a reliever days after acquiring him from the Angels for Vernon Wells. Pretty glad that whole sequence of events went down the way it did for a number of reasons.