Yet another name thrown into the mix for Boston's first pick in the 2013 MLB draft.

Keith Law's first mock draft dropped at ESPN.com on Thursday, and with it entered a new potential Red Sox pick that, as of yet, had not been connected to Boston. Ryne Stanek, a pitcher from Arkansas, is Law's pick for the seventh-overall pick in the 2013 MLB draft.

Obviously, Law thinks Boston likes Stanek, given he has them selecting him. But it also seems as if Stanek will be taken by the Red Sox in part because players they might prefer will already be off the board: Law mentions Colin Moran and Kris Bryant as players who will have been taken before Boston's turn, and then cites Clint Frazier as potentially too risky to select at #7. Law backs this thought up later by having Frazier go at #13, with the top-10 full of college kids instead of the high schooler from Georgia.

As for what Stanek brings to the table, Law has a full scouting report on him. You need an Insider subscription to read the whole thing, but we can bullet-point it for you:

If the Red Sox draft a pitcher at #7, I might prefer Braden Shipley, but Law has the Marlins taking him. Unless they switch over to DJ Peterson -- the other player Law believes could go at six -- then he might not be on the table for the Red Sox. 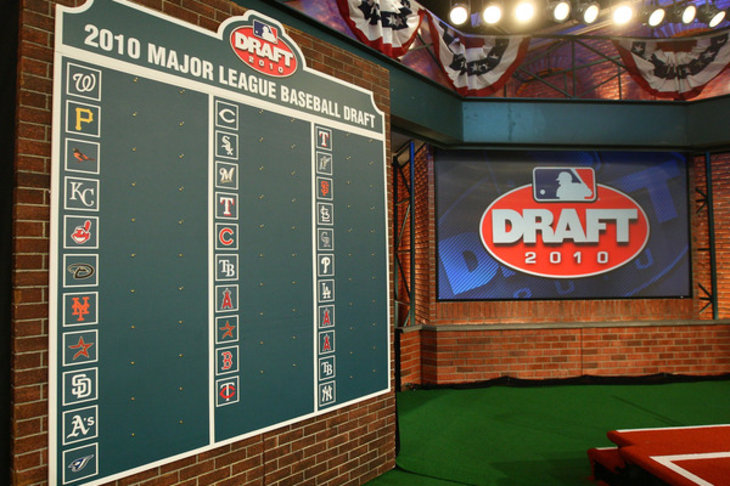 Law also mentions Sean Manaea, who he has going to the Royals on the very next pick if he's still available. Manaea, like Stanek, has seen his stock fall a bit, to the point where he profiles as a league-average starter. However, given his past, Law says a team that likes him could grab him earlier, assuming that he will be able to "recapture his look from the summer of 2012."

Thoughts? Preferences? I'm not sold too much on Stanek, given it sounds like a lot has to go right for him to reach his admittedly impressive ceiling. That ceiling might be enough to draw the Red Sox in, however, if they think they can heal what ails him.